In this wonderful event of firsts, one stands head and shoulders above the rest. Three of the teams participating in the World Magic Cup this weekend are representing their countries for the first time in Magic history. 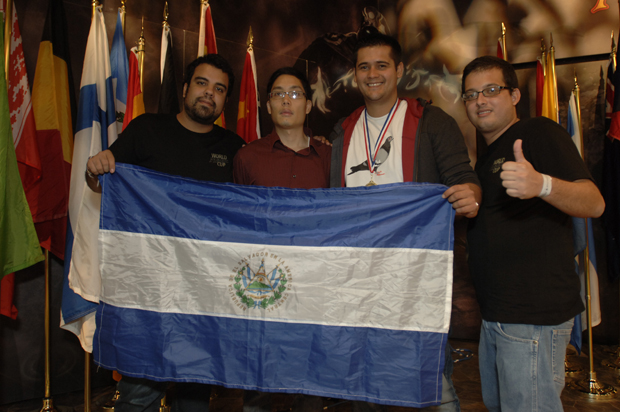 El Salvador is the smallest country in Central America, measuring about 8,000 square miles with a population of just over six million. In the past few years, Magic has really boomed, driven by a strong central group of players and devoted store owners. This year, Juan Navarro put up the best finish in the country's Magic history at Pro Tour Barcelona. Now, thanks to all of the hard work in growing this burgeoning community, El Salvador is being represented with a national team for the first time ever. In fact, until this point, El Salvador had never even had a lone representative at a Worlds competition, making this first doubly important.

So how do you guys feel now that El Salvador has its own national team?
Juan Pablo Vega Trigueros: "We're making history because we're the first ones!"
Juan Navarro: "We were kind of scared because we didn't have access to all of the pro players' information, but we're getting the ball rolling."
Ivan Oro,showing me a series of pictures of pros mercilessly punching him: "They are already beating me! Again and again..."

What do you think is most important about this for Magic in El Salvador?
JN: "We may not do the best, but we're definitely going to have the best time. This is the seed for something bigger for our country. We like that we're going to be the first from our country to do this."
JP: "Yeah. I'm a store owner, I try to attract more people every day. I really love this game and I want to share it with as many people as possible."

How has Magic in El Salvador advanced in the past few years?
JN: "I have started working with players from other countries, for one. When I prepared for the Pro Tour, I got some help from people in Mexico. It's easier with the language barrier."
Juan Canizales: "I've only been playing for two years, and I've learned a lot in this time. We play all the time."
JP: "This year we got the first Pro Tour Qualifier, which is really big. I think this is really great, bringing so many people together from so many different countries. It's amazing.

Do you have anything you'd like to say to the rest of El Salvador's Magic community?
JN: "Keep playing and improving every time. I know that there are a lot of people over there who want to come. The competition was fierce for these slots."
IO: "When people see these pictures..."
JP: "It's a great place to be, and great to get here. You won't always win, but you should keep practicing. I hope this motivates them to do well."
JC: "I think that in two years, Magic in El Salvador will be so much bigger." 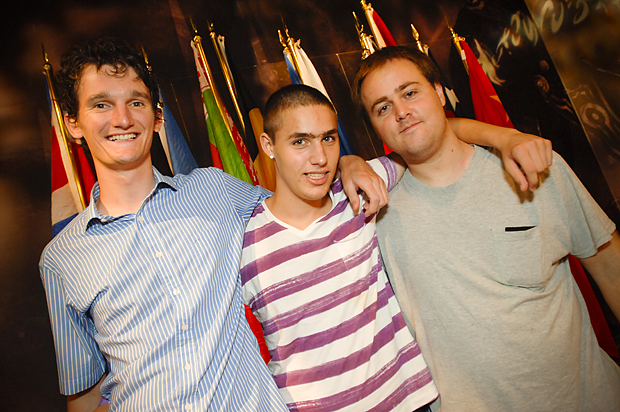 If you read the coverage of Grand Prix Manchester from earlier this year, there might have been a story that jumped out at you about a little country called Cyprus, and a community's attempt to band together to spread the game of Magic. Cyprus is an island nation in the Mediterranean Sea, home to a little more than a million people. At Grand Prix Manchester, we got to meet a few of those people who had made the trip and hear their tale of how Cypriot Magic grew from seventy-five players to two-hundred fifty and from zero stores to five. Last year, they had their very first national championships and sent one player to Worlds. This year, they qualified their first player for the Pro Tour, team captain Daniel Antoniou, who played in Barcelona. Due to an absolute passion for the game, and a wonderful method of easing new players into the game, the explosion of Cypriot Magic shows little sign of slowing.

What do you think the impact of the World Magic Cup will be in Cyprus?
Michael Ide: "I think it encourages people to play. Before, we had only had one PTQ. We had one this year, and now with this, people can see that there is an actual route to get here."

So how has your experience been so far?
Daniel Antoniou: "Awesome. Just awesome."

What has been your favorite part of your experience?
MI: "I'd say the people. So far, most people have been friendlier than I expected, which is really nice. Getting to interact with the pros has been pretty nice."
DA: "Hanging out and playing with the pros."

So who all have you guys been spending your time with while you've been here?
DA: "We hung out with the Austrians, the Belgians, the French, and the Greeks."

So have you guys spent a lot of time with these groups preparing for this event?
DA: "I am friends with Raph Levy, so I worked with the French for Pro Tour Avacyn Restored and some of the Americans here. We met a lot of pros at Grand Prix Manchester and made a lot of great connections.

So do you guys have any advice for the rest of the up-and-coming Cypriot Magic community?
DA: "Practice. A lot. Don't stop practicing."
MI: "Heh, I dunno, I'll talk to them when I get back."

How about any advice for other countries that might be trying to get their own team for a future World Magic Cup?
MI: "If there is a country where they want to get involved in this, one of the biggest things you can do is to try and get the casual players involved. We do things to help them get integrated, like running Two-Headed Giant tournaments where we pair up the less-experienced players with one with more experience."
DA: "It is a lot of fun playing Magic at this level. You have to try to get players excited about making it to this level so they can experience it." 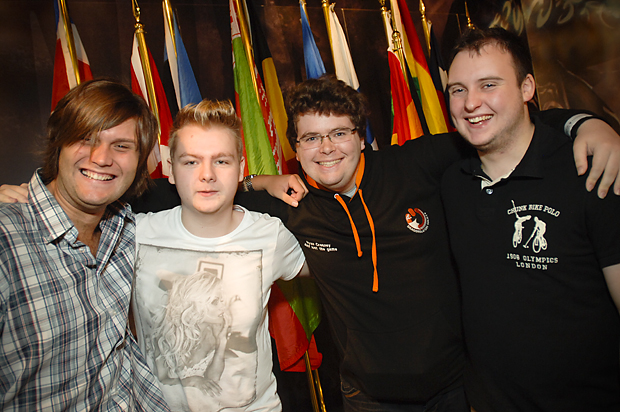 One of the more interesting histories in Magic team competition comes from the United Kingdom. Originally competing under the Union Jack, England, Scotland, and Wales all competed in one national championship and represented one united front. In fact, Scotland's Stephen Murray, captain of this year's Scotland team, was a member of Great Britain's national team in 2008. Then, from 2000 through 2006, the teams all competed under their own flags, in their own national championships, and represented their own teams. Then, they went back to competing as Great Britain. Now, the pendulum has swung back, with each team having its own representation.

There has always been a chance that you might catch an Irish accent coming out of an English or Great Britain national competition. Until this year, players in Northern Ireland were given the choice as to whether they wanted to compete in the English or Irish national championships. More often than not, players would compete in the Irish national championships, as it was just generally easier to sort out. In fact, Northern Ireland's captain, Alan Warnock, was a member of Ireland's national team at this past Worlds in San Francisco. This year, he is competing as the captain of the first ever Northern Irish national team.

So how does it feel being able to represent Northern Ireland on the first national team ever?
Alan Warnock: "It feels pretty much as good as representing Ireland did last year. Which is pretty great. It's actually a really big thing for pride, being able to stand up for your own country."
Ryan Creaney: "Really unexpected, honestly. I was actually third place at the qualifier I got my spot on the team from, but the others couldn't go. I didn't expect I would actually be here."

Does this feel different than you would feel if you had, say, qualified for a Pro Tour?
Sam Bunting: "It certainly means more that this is a fight for your country, rather than for yourself."
RC: "Definitely. A Pro Tour is a great achievement for one person, but bringing home a trophy for your entire community is on another level."

How does competing as a team differ from competing as an individual?
AW: "For traveling, it makes a big difference. It's much easier to travel when you have someone to travel with. When you can organize a trip with a group of people, it completely changes the experience."
RC: "I actually had one of those experiences. We organized a trip for Grand Prix Amsterdam, and there were like twenty of us who made the trip. The hotel situation was crazy. There were something like four rooms with six of us in each one..."
Chris Kane: "That's what makes Magic so good. There's such a great sense of community and camaraderie. It's nice because even though we're here as a four-man team for Northern Ireland, our team is much bigger than that.

Do you guys have any parting words for any countries that are striving to get their own national team as you did?
AW: "Ireland had actually been troubled for a while, with less people playing, but a lot of people went thought a lot of trouble to encourage people to always show up at the local shops. We give each other decks, share cards, stuff like that."
CK: "Bring your friends, get everyone into the game... stuff like that really helps. I've only been playing for a year. I actually went to the store to try and learn another game, got shown Magic, and now I'm here."
RC: "I fell out of competitive play for a while, playing mostly casual stuff. I have started to give cards to people and got them playing Commander with us. Now that there are a bunch of people who play with us all the time, we've started to take the ones who show a bit more of a Spike-ish bent and show them to other shops that have a bit more of a competitive environment to help them along. It's a great way of helping out. We also go out of the way to make sure that we hold tournaments where newer players and older players can team up instead of playing against each other to ease the newer players in."
CK: "Yeah, it can be pretty awful if you're booster drafting for the first time and you just get absolutely stomped. You might just stop playing because you had a bad experience. This helps avoid that. If you make sure that the new players enjoy themselves, the community grows."
RC: "And then you get twenty-five people crammed into four hotel rooms..."

Anything else you would like to say to the rest of Northern Ireland?
AW: "Could you say hi to my mom for me?"