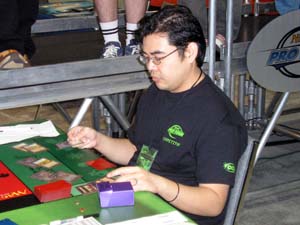 Michael J took a spin as a player in LA.

of the main differences between a Constructed Pro Tour and a PTQ (or Regional Championships, or other local event) is the degree to which the field is established. For example, after the conclusion of this tournament, you will have a much better idea of what decks are good, what new ideas should never be heard from again, what you should prepare for, and maybe what you should play yourself if you want to win a Qualifier… but the players who are establishing that metagame did not have the same luxury.

In the typical PTQ season - say, Kamigawa Block constructed - there are usually a limited number of decks you have to prepare to fight, some Gifts, some Black Hand, certainly a White Weenie, maybe some off options, but 80 percent of your matchups usually come down to 20 percent of the potential viable options. Not so in a field with brand new Ravnica cards after a tumultuous number of card rotations. If there's one thing I can say I learned at this event, it is that preparing for a Constructed Pro Tour is largely about putting together a strong proactive plan of your own… because a general reactive plan isn't going to cut it if you can't predict all of your opponents.

Take my Day One as the model. Eight rounds, seven distinct archetypes:

4-4 is only one match out of Day Two - and believe me, many of my matches felt razor close - but I think that I made a key deck error coming into PTLA.


I elected to play the above Black-white Control deck. I realized that it was not high on the power curve (I considered combo the most powerful deck coming in), but I liked the deck for its consistency. Black-white gets more or less the same draw over and over again, and the large number of cycling cards gives it even mana development game after game. More than that, it has a good chance against combo and control decks while absolutely demolishing creatures.

Notice that I beat most of the creature decks I played. Both mighty Affinity decks went down, and I was even able to take a match from the extremely robust /Golgari Grave-Troll deck. I made an error against Raphael Levy in Round 2 which cost me a game where I battled back after being pummeled by a pair of s. The majority of my losses came from the control side, and I think the reason is simple:

My deck doesn't do anything broken.

I played against two decks with from the Loam engines, and even managed to beat one. But taking down a deck like Neil Reeves' in Round 3 isn't easy when you are trying to fight for from the Loam, , , and with an equally ponderous - but far less powerful - selection engine. I nearly lost to the deck, despite being way ahead in all three games, because in Game 1, when I was up maybe six or seven cards against an opponent with no hand… he just topdecked Kokusho after Kokusho.

So was the deck a good choice? Even if I had played a little bit better and made Day Two, I was probably outclassed in this tournament. My team underrated Ravnica: City of Guilds a bit, and I think that cost us a potentially broken deck. That said, control decks usually do better in PTQ formats than the Pro Tour itself, because (again) the formats are predictable. You can prepare to control the elements and decks that have to be controlled rather than, like, everything.

Here are some problems with my deck:

You can do basically the same thing, but better, by playing the new cards. How much better is in concert with Temple Garden? Doesn't that allow for a from the Loam engine in place of ?

I actually think the concept of my deck was solid, and if the PTQs are all Boros Deck Wins and Affinity to start, some sort of White Control deck with life gain and board-removal elements is probably a decent idea. However, for this tournament, it wasn't an optimal choice.

Now as a writer rather than a player, I get to step back and admire the decks that look good going into Day Three. Not surprisingly, I love Tsuyoshi Fujita's weapon of choice this time around. It is an elegant solution to an unknown metagame. When the opponents are all taking four points of damage from their mana per game, why not go to the dome? If the other guy is leaning hard on a single Ravnica dual, doesn't (the old + ) look pretty good?

The other deck that I really wish I had designed myself is Billy Moreno's MadTog2020. It's the perfect mix of many of my favorite cards… , , , and the ubiquitous from the Loam. It's odd, especially in a Top 8 that features Tsuyoshi that I would be saying this… but I think Billy Moreno's 61-card special might be the best deck of this tournament. If his mana base doesn't kill him in a triple Red Deck Top 8, and if he plucks on the right turn, he could do very well.

We'll have to see Sunday how this exciting tournament finishes up. Check back at 10:45 a.m. PT for the live webcast of the Pro Tour-Los Angeles 2005. I'll be the one making the color comments next to the inimitable Randy Buehler.