Duels of the Planeswalkers will see a new release on June 15 (note: release may vary by platform and location), but one fortunate Duels player is benefitting from the experience of playing digitally this weekend. Her name is Carrie Oliver, and the Cambridge, England resident was clearly excited to talk about how she came to Magic, how she came to the Pro Tour, and how her experience in Japan has been so far this week.

It all started about a year prior to the release of Worldwake. Carrie's roommate at the time had purchased a new game for his Xbox, and she was fascinated by it. "I liked the puzzles and all the decks," Carrie explained, referring to her first encounter with Duels of the Planeswalkers. When her next roommate brought the game home, she was hooked. 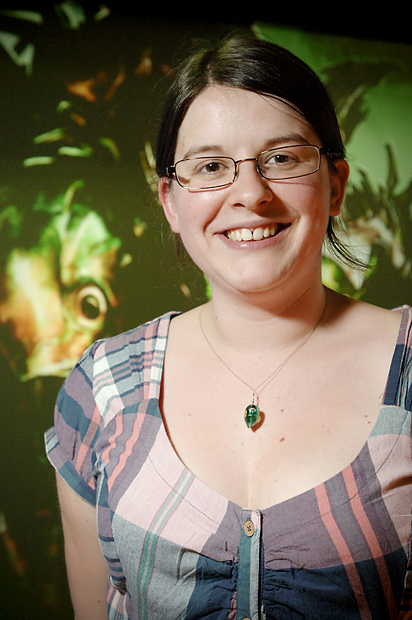 But how did Carrie go from playing digitally in the world of Duels to the analog form of the game?

"My friend asked me if I wanted to go to something called the 'Worldwake Prerelease.' At the time I didn't know what that meant, or even that there was a card game and that cards came out in expansions." Carrie went directly from the digital world to the Prerelease and managed a respectable 2-2.

"He had to explain everything," Carrie added, describing her first time playing in a tournament after discussing it with her friend, "but I enjoyed it a lot and went to the Launch Party a week later. I've been hooked ever since!"

It's all well and good to go from Duels to a Prerelease, but that's still a far cry from playing the Pro Tour. Those are the biggest of the big names, so how had Carrie managed to pull that feat off? "After the Worldwake Prerelease, my friends and I began playing at our local shop. We'd draft each week, and I found myself unable to wait for each tournament! Then a friend suggested we try something called 'Extended' for a 'Pro Tour Qualifier.'"

For Carrie, Extended was a new format entirely and a Pro Tour Qualifier had to be explained as well. What was it? What did you get for playing in it? How did you go about joining in? To top that off, with a small collection she wasn't sure she could even put a deck together. Luckily, with the announcement that the Extended format would be shrinking to four blocks, Carrie and her friends found themselves with enough cards to compete. Captivated by the Tempered Steel decks of the era, she decided to build her own version. Unfortunately, she didn't have any Thoughtseizes, so she shaved the deck down to just the most important blue and white cards, cutting black entirely and simply hoped for the best.

"My goal was to win two matches that weekend!" she explains, looking back on the tournament. "I won, and I couldn't believe it. I had always wanted to go to Japan, but I didn't even know until midway through the event that the winner would get to go to Nagoya! That was exciting to find out." Wanting to make the most out of the adventure, Carrie and her boyfriend Matt (who is also a Magic player, though not qualified for this weekend) decided to take a vacation of two weeks in the country.

I asked Carrie what her goals were for the Pro Tour itself.

"I wanted to win two matches," she explained, "but now I'm 4-1-1 and feeling confident about my ability to win one more to Day 2." It helped that she didn't see any big names sitting at her draft pod for the final three rounds of the day, though with a laugh, the Brit quickly added, "I don't know many big names, though. But that's a good thing! That means when you play against them you're just playing Magic. I'm doing 500% better than I anticipated this weekend!" 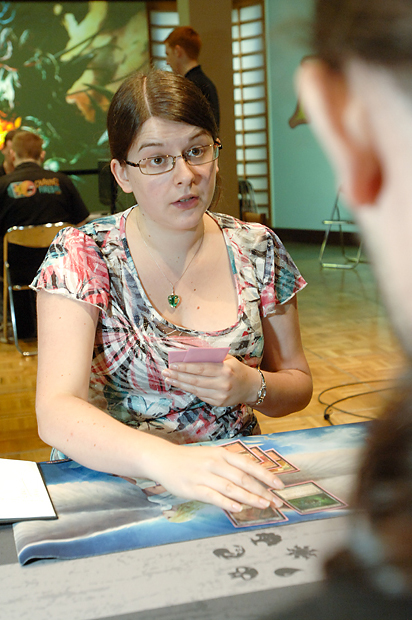 Carrie Oliver faces off against Robert Jurkovic in the first round of the second draft here in Nagoya.

When asked for her closing thoughts to all those reading out there who might be considering how to go down the path Carrie has chosen, she paused, unsure of how to answer. "My goodness, I don't want to sound pretentious!" she explained, laughing.

Finally, after more thought, she closed with this: "Don't think you're not good enough to do this. I've done it, and I make lots of mistakes. Just learn from them, and play as much Magic as possible!"

At our last check, Carrie boasted a formidable 8-1-2 record heading out of the draft rounds, and showed no sign of slowing down. Count this reporter as rooting for Carrie and the rest of her gaming crew back in England to be the next big faces of British Magic.