Team Draft day at Worlds is often referred to as the most grueling day in Magic, even more so than Rochester Draft day at a Team Pro Tour because here players have already battled through three full days of Magic and now must tackle the game's most taxing format for four more rounds. When former Finnish National Champion Tomi Walamies was asked at Pro Tour--London if he'd be playing in Nats again this year, he told us that he absolutely would not be doing so because he just couldn't make himself want to play on draft day here. In short, it's a beating.

For those of you that are unaware of how Team Rochester works, allow me give you a quick recap. 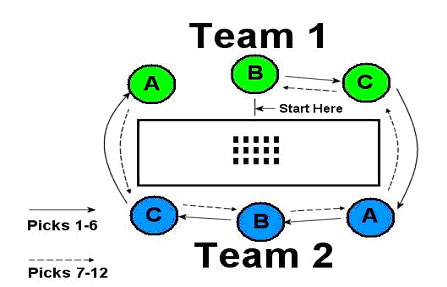 Each team fields three players at the table, and unlike your casual team booster drafts, all three players on a team sit next to each other in seats lettered A, B, and C. One of the players in Seat B then kicks off (we'll say from Team 1), opening his pack and spreading it out on the table for everyone to see, and choosing one card from the spread for his own deck. The picks then move left around the table and then "wheels" with the player on Team 1 who has not picked a card taking two picks before the picks reverse order and move back around the table in the opposite direction. Once all the cards in pack 1 are drafted, the next player opens his pack, spreads it out on the table and the process repeats. (Never mind the graphic only going to Pick 12. They draft 15-card packs here, just like everybody else.)

The strategy in this format is incredibly complicated because not only do you have to draft your own deck, you also have to worry about what cards are in your opponent's decks and try not to ship them bombs that have the potential to wreak havoc on your squad. The fact that you can see what's going on in every deck means that sideboard cards like Rain of Embers and Rolling Spoil find their way into maindecks to correct certain matchups, as do Sundering Vitae and Seed Spark. Another thing that many of the best teams will do is try to create favorable archetype matchups against the other team's decks by switching archetypes midstream, though figuring out what those actually are often requires practice, a noun in short supply when you consider that these players have already been forced to prepare for three other formats this weekend.

One thing to note about the drafts this weekend is that they are being done with only one set available, meaning you are going to wind up with some decks that run deep with multiples of good commons. Jon Sonne's first draft deck from their match against Portugal has 5 Dimir Infiltrators. Eivind Nitter's deck from the Norway vs. Portugal match has 3 Scatter the Seeds and a Fists of Ironwood to pair with his two Glares of Subdual, and multiple players in the room have decks with four-ofs in them, making them resemble preconstructed decks more than the piles you would see in your average booster draft.

Here are a few notes from the U.S. vs. Portugal match:

The players from the States said they had done 12 practice drafts coming into this weekend, perhaps the most preparation of any team in the room and clearly indicating they are interested in helping the U.S. reclaim what they feel to be their proper place at Worlds. In terms of draft strategy, it seemed like they sat down with the idea of splitting everything but Green in the middle and left, keeping flexible and sticking Green on the right, because that's the seat where you get to screw the other team the most. As Scott Johns observed, you run Green in that seat because it enables you to play the most bombs and also be able to bridge across guilds to get a deck despite all the hate drafting from the other side. It also seemed like they expected De Rosa to be Boros before they even drafted any cards, so it will be interesting to see if every team tries to keep the Red/White deck in the middle. As it turned out, De Rosa had a lot more red and very little white, since the Portuguese didn't even bother with that color.

Jeroen Remie was railbirding that draft and wondered if De Rosa's opponent was just booster drafting instead of drafting a deck to beat Ant's. It almost looked as if one Portuguese player didn't even order his cards by mana cost or color, or bother to flash his cards to his teammates - it's perhaps the first time I've seen such non-interaction at a Pro Tour. Players aren't allowed to verbally communicate with one another while the draft is going on, so you usually get a lot of pantomiming and sign language in place of that. Here there was nothing. 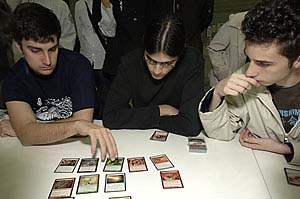 The Portuguese struggled against the U.S. drafters.

Talking to the Portuguese, they felt they got strongly out-opened by the Americans and Marcio Carvalho also stated that the U.S. team was definitely more prepared for the draft. The Portuguese would later change their draft strategy slightly to incorporate the Boros deck in the B seat, realizing that their decks were simply at too great a disadvantage if they weren't drafting red cards.

When the dust cleared, it turned out that De Rosa had an exceptional deck, Reeves had a very strong four-color build, and Sonne was stuck in a Dimir mirror match with few of the best cards in those colors while facing four Vedalken Entrancers. On the other side, the Entrancer deck looked quite good, but the other two were mostly piles of filler, and the opinion from both squads was that Sonne would lose but the other two matches would likely go to the Americans. Of course, there's a reason why they play the games. The final result yielded a sweep in favor of the U.S., giving them an eleven point lead in the standings.

Reeves won his match in spite of a play mistake to throw away Game 1. Big Country had a Bramble Elemental with Fists of the Ironwood and Pollenbright Wings on it and then instead of casting Drooling Groodion, he cast Auratouched Mage, basically skipping a turn. If he had cast Big Groods there, he probably wrecks his opponent's board a turn later and cruises to an easy win. Regardless, he recovered from the mistake and won the next two games with little trouble.

Looking at the second draft, you definitely started seeing tendencies by seat. Thanks to Eli Kaplan for the legwork.

One note: In 75 percent of matchups, Selesnya faces off Boros. It appears to be the best way to handle the red beaters' rush. All of the rogue archetypes fall into the B seat.