Feature: Up from the Ranks of the PTQs

you might expect at the largest individual Pro Tour in the game's history, a larger-than-normal portion of the field was made up of PTQ players cashing in their free airfare that came with the win. Out of the 139 players who advanced to Saturday's competition, more than one-third of them got there via a free plane ride.

Two of the 58 such players were Nathan Zamora and Chris Wolterek - two veterans of the Pro Tour Qualifier grind. Both players have has scant Pro Tour experience but were doing their best to avoid hitting the beach for one more day with 9-2 records after 11 rounds. 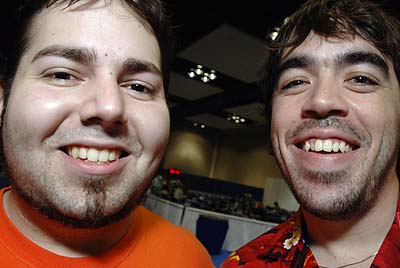 Zamora was playing a Magnivore deck featuring with all the usual suspects along with a smattering of instants. We checked in on Zamora on Friday and learned that he qualified for this tournament when his planned trip to Grand Prix-Philadelphia got derailed. Instead he and his friends opted for a Texas PTQ - something Zamora claims he would not have done if not for the change in policy regarding the travel award.

"The airfare being paid out here is definitely the reason I am even here in the first place," Zamora explained when asked how the change from a $250 travel voucher to airfare affected his decision. "First of all it is going to be more than $250 for flight from just about anywhere. Then I have to pay for hotel on top of that? Paying for a hotel is fine but paying for hotel and airfare? A $250 check is just not going to cut it."

"The other thing is that I am basically a kid," he continued. "I'm 20 years old. I don't want to have to go around setting up my flights and everything. On top of that I don't have a credit card so what would I do? Instead I can just fax them my information and they set it all up for me. I got a non-stop flight here and I was able to prepare for the Pro Tour and not have to worry about my travel plans."

Nathan had modest expectations coming into the tournament. He hoped that he could make Day Two or possibly finish in the money. Not having to worry about whether or not he could recoup the expense of airfare on top of his hotel costs allowed him to relax and not stress about having to be high in the standings. He was even able to take his time on the deciding on a deck until the last minute without experiencing too much anxiety.

Nathan and his pals had been looking at the Magnivore deck but were not convinced it was the right choice until the night before the tournament. Nathan's friend Keyafar Saleh played a similar deck in the LCQ on Thursday but lost the heartbreaking lone single-elimination match after the cut to eight. They decided that the deck needed more resistance and added Hinder to the mix that already featured Mana Leak - somewhat of an oddity in a sorcery oriented Magnivore deck.

Nathan was still feeling a little wobbly about the deck choice in the opening rounds but that soon changed. "After I won my first two rounds I thought: 'I'm doing this now. I am going to be fine.' Coming into it I thought I would do a little worse than I am doing right now."

Where did he think he could go from his 9-2 record with five more to play?

"Top 8! All the way. I want that trophy. At first I was thinking about the $40,000 but then I started to think about the trophy. It is just so simple it's perfect. It is what I want," declared Zamora with what seemed like sincerity.

It is amazing that Zamora is even in a position to ponder that situation, considering that he was thinking about putting the game aside until he watched the coverage of Pro Tour-LA and saw his old friend Billy Moreno's amazing run.

"I used to play with Billy in the Texas PTQs and here he was in the Finals of a Pro Tour. Nobody really knew who he was - that was the big thing about it. In the past it was Kai Budde, Jon Finkel, YMG - it was like you needed to be in the game forever to do well. Billy comes out of nowhere and does well. Star Wars Kid comes out of nowhere and does well. I thought that maybe there had been a change in the game. I started playing again, my friends started playing again. Now I am doing well. I don't think I would be doing it if it wasn't for the people who came out of the PTQ scene and did well. I think it is really good for the game."

Chris Woltereck was similarly inspired to qualify for this event based on the change to the PTQ prize structure. Chris is not stranger to the Pro Tour, having finished in the money at Pro Tour San Diego, but this was his first individual Constructed PT.

He was playing a black-white control deck that was designed by himself and his good friend Adam Bowles. Adam was not qualified for the event. Like Chris, Adam only started playing with an eye toward qualifying in the last few months when they began to offer the airfare as a prize. 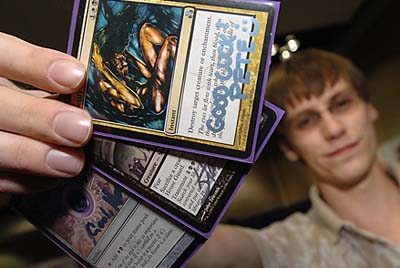 "When I was younger I used to have to sell the slots in the finals because I needed the money," Woltereck explained. "There have been a couple that I have qualified for and not gone to but now with the airfare it makes it much easier. If they did not have that I would have been playing for the money unless it was in the continental United States. I have like 30-plus Top 8s in PTQs."

Chris's deck showed up in Friday's coverage. Many of his cards are adorned with signatures and well-wishes but not from the artists or other players. They are a constant reminder to Chris of the people who have supported him over the years.

"I would obviously like to win but I pretty much want to do well for all my friends and family back home," Chris explained as he fanned through his deck. "I have been playing for so long and this is my first chance to show them what I can do. I got them all to sign the cards in my deck; my Mom, my friends, Pete. They signed cards like my Mortify and wished me good luck."

So far it seemed to be working.