Feature: R&D at the Tournament

R&D often sends a couple of its members to each Pro Tour for various reasons. Randy Buehler, the Director of Magic R&D, comes to every event to do live webcasts and podcasts. One or more of us may join up with the online coverage team (as I've done for this event). Mark Rosewater shows up to Worlds to run his trivia show.

But we've turned out in higher numbers this weekend - (1) because the event is in Hawaii, and (2) because we anticipated this Standard environment being a diverse and interesting one and we wanted to see if we were right. As developer Matt Place put it, "It's nice going to a tournament and knowing there's not some huge mistake [of ours]… they're not about to unleash something like Jitte on the world." 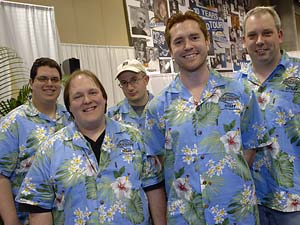 Matt is here this weekend, as is fellow developer Mike Turian and Magic lead developer Brian Schneider. I asked Brian how he thought we as a department had done at predicting how this metagame would look when we were finishing up Guildpact a year ago.

"We had it just about right on," he said. "We knew how most of these decks would go. We didn't get blue-red exactly right, though; we never had that slow thing with Urzatron and we tried the eight Howling Mine deck and didn't think it was good enough."

As the match Brian was watching (Adam Chambers with Ghazi-Glare vs. Tiago Chan with blue-red Owl) went into extra turns, he commented, "Is the format slower than we thought? Yeah, it's a little slower. But there're still good aggressive decks out there. I expect a couple of them to make Top 8."

Turian was lamenting that the format looked slow as he walked around at the end of Round 3, but he changed his mind after Round 4 began. "This format looks so much better walking around at the beginning of the round instead of the end. There are Zoo decks everywhere. Best format ever - tons of little animals."

Here's a quick rundown of R&D's year-old predictions for this event's major archetypes:

Black-white control and black-white-green control. We had this as the best control deck in our format, mostly due to some combination of Wrath of God, Debtors' Knell, and Loxodon Hierarch. The Knell was the one card in Guildpact that Schneider was hesitant to print. "Even at seven mana this thing seems ridiculously good," I recall him saying. But he let it go and it has turned out to be a wonderful endgame card.

Another seven-mana Orzhov card that is making waves here is Angel of Despair. We played this 5/5 a ton internally, sometimes instead of Kamigawa Dragons. Initial reviews on the 'Net had her at outclassed at best, unplayable at worst, but she is holding her own here for sure. One card that really makes this deck hum is Faith's Fetters, a card that we allowed to enchant permanents specifically so that it could keep Umezawa's Jitte and Vitu-Ghazi, the City-Tree in check, and it has been doing just that. My personal fear is that is such a fantastic card at stopping damage that it lessens the impact of all aggressive cards too much. We'll have to see how it plays out.

Black-white Aggro/Discard. We had several versions of this deck, although we never seriously considered Shrieking Grotesque, choosing to run Hypnotic Specter over it every time. Some decks here have the Gargoyle instead of the Specter and some have both. We fooled around with Cry of Contrition and Ravenous Rats, but found that versions with better beatdown creatures - like Hand of Cruelty and even Orzhov Guildmage - could beat a wider variety of decks. It'll be interesting to see if the discard-heavy versions actually turn out to be better. Ghost Council was a card that we knew would be a house; in fact, we had to up his activation from 0 to 1 to give other decks a fighting chance to kill it.

R-G Beatdown and R-G-W Zoo. I consider these decks the low-hanging fruit of the format. We built them, you built them, everyone can figure out how to curve out with undercosted fatties and burn. The good news for deckbuilders is that finding the exact right mix of stuff is very difficult. White spells or no? Dryad Sophisticate or Scab-Clan Mauler? Giant Solifuge or Rumbling Slum? Moldervine Cloak or Jitte? Our best versions at the end of development were three colors with Jittes, but that could change in a heartbeat after this weekend.

Red-blue in any configuration. This is the color combination that we never quite nailed down. After every playtesting session, we'd say, "There's a really good red-blue deck out there; we just haven't found it." In fact, there are several. We had a version of Annex-Wildfire that was decent, but we didn't have Icy Manipulators among other things. We never had a blue-red Urzatron deck at all (but I'm glad it gives Invoke the Firemind a potential home). Our eight Howling Mine deck (with Kami of the Crescent Moon) did not play Ebony Owl Netsuke, just a bunch of Sudden Impacts. Blue-red was definitely the guild where we were holding our breath to see what players would cook up, and we're pleasantly surprised.

As for the other decks flying around - Ghazi-Glare, black-white Tallowisp, mono red aggro, Greater Good, and so on - we had various versions of these as well. After all, that is our job! With out stepped-up playtesting on the heels of Mirrodin and Kamigawa, I'd like to think that we set up a engaging yet balanced metagame.