Karsten is an interesting character. On the outside, he appears to be a quiet Dutchie, thoughtful but somewhat shy. Once you get him talking about something that interests him, he turns downright chatty. After his success in Nagoya and another Day Two appearance here in London, we decided to check in with Frank on the evolution of his vaunted Limited list. 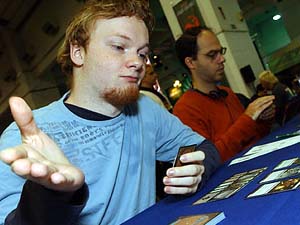 The latest edition of The List actually involves moveable card images in a Word file created by Roel of "Roel de Spoel" fame that players can rearrange as they choose. The Word file only contains commons and uncommons for Champions and Betrayers, so unlike Frank's list in Nagoya, rares are not included here.

"The real purpose of the list is to find out which cards you feel are over- and underrated," Karsten said. "Since there are three sets out there now I guess it's not as useful this time - Saviors is just a text list because we didn't get the card images put together before the Pro Tour. I originally just put the whole thing together because I had an interminable plane flight to Japan, but after Nagoya I felt as if I had to put together The List again.

"We did something a little different this time in that I tried to break down the pick order more by color archetypes as well as by overall power. Honestly, I think for multiple sets the value of the list goes down because what you pick is just so dependent on what else is already in your deck. However, for single sets, I think there's a lot of value in making something like this. Expect to see it again around Ravnica time.

"Oh, and before you go, I guess I have a kind of interesting strategy that I came up with before this weekend. If I feel like the neighbor on my right is in white and I only see a couple of good white cards come through from that side, I will often try to move into white myself. What this does is allow the two of us to corner the market on white and sets me up to receive all the best white cards in Betrayers, where white is clearly the strongest. Doing this in an earlier draft helped me get a fourth-pick Shining Shoal, so I guess it's working."

While Frank recognizes that the value of The List isn't that great currently, other players have been more critical of The Lists usefulness, some going as far as calling it an utter waste of time. Anton's Jonsson's comments about the list were a bit more moderated though.

"I think it can help someone with a logical mind when it comes to learning how draft," the great Swede said. "All picks (in every format) are dependent on what cards are already in your pile, so from the perspective the list isn't that valuable. However, what it forces players to do is to sit down and talk about pick orders and card valuations, which is certainly a good thing, though you can get that from other outlets. It gives you practical scenarios to say, 'Okay, if I had to choose between X and Y, I'll choose X in most situations because…' In the end, I think if you try and force your drafts according to what you see on a piece of paper, you are going to fail, but if you are clueless and then add the list to what you know, you'll probably end up doing better."