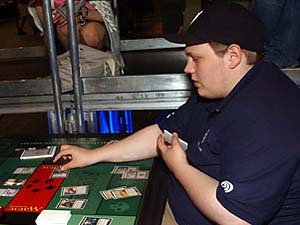 I wrote my preview for this tournament, there were two clear favorites coming into the weekend - Anton Jonsson and Richie Hoaen. Scott Johns covered Anton's draft while I perched behind Richie (with an eye on Josh Ravitz, who was stationed one player removed to Richie's right). Hoaen and I had a friendly wager going for this weekend as to who was going to finish higher in the standings, Josh or Nicolai Herzog, and I was going against the man Mike Flores has dubbed "Rabbit."

Despite Ravitz being far more prepared than Herzog, I was not prepared to bet on his luck versus Herzog's luck. Plus, Herzog had won the last two Limited Pro Tours he had deigned to show up for. To give you an idea of where Herzog's Limited game was at that point, he was qualified for this event on rating despite going a combined 3-7 in Limited at his Nationals and at Worlds. Still, Richie wasn't going to leave anything to chance.

"I may have to concede to Josh if we play each other," he joked.

I was excited to see how Richie sorted through his first pack and have to confess to being a little disappointed when he flicked Kokoshu the Evening Star onto his pile with little more than Hanabi Blast and Mystic Restraints to muster feeble arguments against it. There wasn't even a Glacial Ray to make things interesting. (I have to confess that at this point it isn't even close and even I would take the dragon, as the splice decks have gotten considerably weaker with the full block compared to triple Champions.)

After the draft, I asked the Canadian if you assign more value to your first pick when you open a bomb rare in contrast to a solid staple card such as one of the Rends, or was that a mistake that weaker drafters make.

"You obviously want to be black and get a lot of spirits," laughed Hoaen. "You are somewhat more committed than you would be for something like a Rend Flesh simply because you are going to get so much more value out of it but if the two guys to my right seem like they are black, I am still going to abandon it."

It certainly appeared that black was going to be open when his next couple of picks were Rend Flesh and Scuttling Death. He sent three straight Mystic Restraints downstream and didn't waver from the dark side. He broke stride with his fourth pick when there were no black options worth defending. Instead Rich had to start thinking about his potential second color. Kodama's Reach, Burr Grafter, and Indomitable Will eventually churned their way to the top of the pack with no clear favorite until Richie had to pick. The dream of a turn-four dragon - assuming some kind of elf or elder down the line - made the Reach Richie's first off-black card.

There was little question of Richie passing the blue cards once he had committed to being black, as that was not a color combination he felt comfortable with despite not making his list of color combinations he just won't draft. "I will draft any color combination except green-blue, green-white, red-black, or red-white. I don't like blue-black either. Other people seem to win with it but I don't"

His next pack posed the question of Serpent Skin or Bloodthirsty Ogre - there was also a Villainous Ogre in the pack - and Hoaen was happy to have answered with the 3/1 when he saw a Painwracker Oni in the next pack. He shook his head, no doubt thinking about the Indomitable Will, as he took Distress over a very late Kitsune Diviner. The black flowed for the rest of the pack with a Villainous Ogre and Cursed Ronin coming to him the second time around the table. Rich was solidly in his dragon's color with 8-9 playables and plenty of options for his back-up color.

Rich opened his Betrayers and had four viable cards from which to choose. The Takenuma Bleeder was the safe choice but he clearly wanted to make the leap into white on Patron of the Kitsune. There was also a Torrent of Stone and a Genju of the Fields but Rich quickly narrowed the field to the Bleeder and the Patron. He took the legend and was quickly rewarded with a Waxmane Baku in the second pack. He briefly looked at Forked-Branch Garami and Gnarled Mass but it was no contest.

One of the more interesting picks in the draft came when Hoaen had to choose between Okiba-Gang Shinobi and Eradicate. Many of Richie's teammates and contemporaries have made the somewhat bold claim that they will take the black discard ninja over Horobi's Whisper due to the emphasis on hand size that Saviors puts on the format. Rich looked wistful as he took the Eradicate but there was no doubt about the pick for him.

"I am not in love with Okiba-Gang as everyone else is," he explained after the draft. "I think he is really good but I would have to already have like five removal spells for me to make that pick."

After picking up Split-Tail Miko and Takenuma Bleeder, Hoaen's Betrayers experience wound down with a late Ronin Warclub, Terashi's Verdict, and Skullmane Baku.

Richie was two for two thus far in opening bomb rares and I was eager to see what Saviors could offer to top what he had. Again, Richie just tossed his first pick onto his pile without any consideration of anything else in the pack. He was three for three even though this one was not a rare - Charge Across the Araba.

Richie had a white player to his immediate right and a black player in Ravitz two doors down. It was a good thing that he had almost 20 playables coming into the third pack because after a Clutch of Kagemaro and a Kitsune Loreweaver, his picks quickly dried up.

Despite his three aces, Richie was not completely happy with how things turned out.

"I actually don't have a lot of creatures so the Charge is not that great. But it is the best card in the third set. I expected to get a lot more black out of the third pack. Either there were not any Kuro's Taken or the Okiba-Gang put one of them into black."

1 Kokusho, the Evening Star 1 Patron of the Kitsune
22 Cards

1 Kokusho, the Evening Star 1 Patron of the Kitsune
40 Cards