Feature: The Rise of the “Others”

Hidden amongst the din of discussion surrounding the recent resurgence of Magic in the United States is the impact of a number of large-scale independent tournaments being held across the nation. Events like the StarCityGames.com Open Series, the TCGPlayer.com Championship Series, and the Midwest Masters Series each feature qualifying tournaments, big prizes, and large championship tournaments at the end of a competitive season. In many ways they are functionally privately run Grand Prix circuits available to any player who can travel to them.

As a result, the new series have drawn a lot of attention over the past year. Big names like Luis Scott-Vargas, Gerry Thompson, and even Brazil's Willy Edel have shown up to compete for the big prizes. And a host of new players who have yet to make their presence known on the professional stage via Grand Prix, Nationals, Pro Tours, or the World Championships have been making a name for themselves via the circuits. They have won titles, repeatedly made the Top 8 of events numbering in the hundreds of players, and have helped shape the worlds of Standard, Legacy, and Limited over the past twelve months. At the World Championships here in Chiba, Japan, I sat down to speak with some of the biggest names from the independent circuits to ask them about the role such tournaments have played in their careers, the impact they have on Magic at large, and a little bit more about the players themselves. 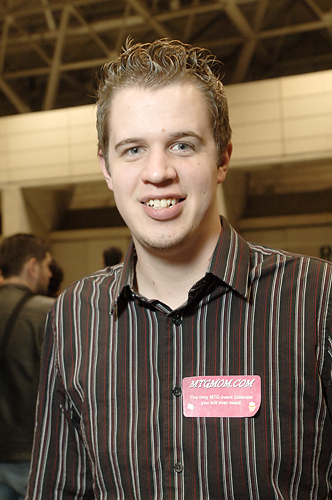 Of the four players I spoke with, Gerry Thompson is certainly the longest in the tooth. His competitive career stretches back a decade, and he is the holder of two Grand Prix title trophies with a number of other Top 8 appearances on that stage. Throughout the StarCityGames.com Open Series in 2010, Gerry could be found competing at the Top 8 tables of both the Standard and Legacy portions of those events. He managed to play in the Finals of a StarCityGames.com Open Series some three times throughout the season, failing by the narrowest of margins to pull down a title. That changed just one weekend prior to the World Championships when he headed to Richmond, Virginia for the StarCityGames.com Invitational, an event that had a top prize of $10,000. In the Finals of that event Gerry managed to defeat Alex Bertoncini, himself the StarCityGames.com Open Player of the Year and rounding $20,000 in winnings the most financially successful Magic player to have never played a Pro Tour, to finally claim his title as the very first StarCityGames.com Invitational winner. 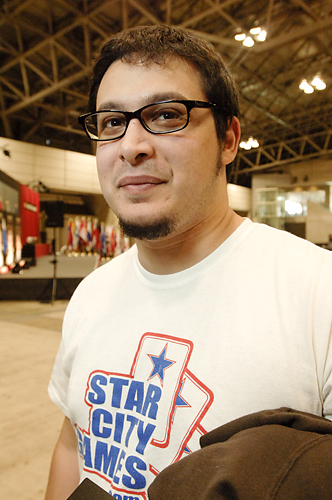 At Pro Tour—San Diego at the beginning of the 2010 season, I sat down with Ali Aintrazi to discuss his background as a player and his presence on the Pro Tour. Since that time, Ali has been an absolute monster on the independently run large scale tournament circuit. He has put up a number of Top 8 performances there, indicating he is more than just hype. But perhaps his biggest impact on the world of Magic has been his role as a deck builder. It was at the StarCityGames.com Standard Open in Philadelphia, Pennsylvania in which he used one of the earliest incarnations of Turbo Land to make the Top 8. Oracle of Mul Daya, Jace, the Mind Sculptor, and Time Warp changed how people understood the world of Standard and soon the deck was absolutely dominating the format. None other than Pro Tour champion Luis Scott-Vargas complimented Aintrazi's innovation by using a similar list a few weeks later to compete at the StarCityGames.com Open in Seattle, Washington. 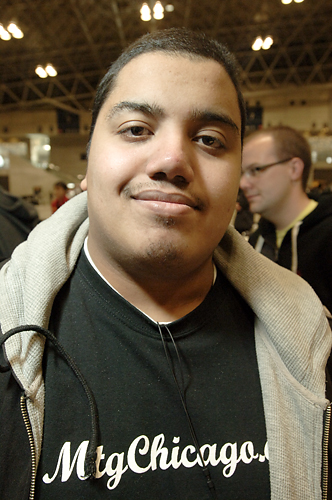 A New York star, Christian Calcano first made his name known on the independent circuit. A dark horse candidate for the Rookie of the Year title at the World Championships, he spent his week leading into Worlds competing at the StarCityGames.com Invitational in Richmond, Virginia. While he missed qualifying for the big tournament, he found himself eligible to play in the Standard Open that weekend. He ripped off a solid performance to make the Top 8 there, then found himself in the Finals against former Worlds Top 16 competitor Shaheen Soorani. Christian held on to take the match, heading into Worlds with a bit of a boost and a shiny new trophy to call his own. 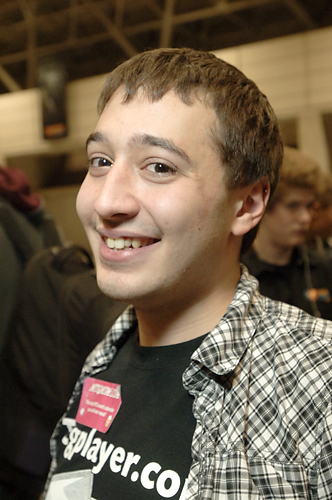 A TCGPlayer.com writer, Nick Spagnolo is one of a rare breed of players who managed to make back-to-back Top 8s on the StarCityGames.com Open Series. Like Christian Calcano, Nick is also an East Coast player. The independent circuits have led him to join forces with a number of big indie stars like Calcano, Dan Jordan, and Alex Bertoncini. Together they threaten to be the next wave of American Magic players who may someday replace the current class that includes names like Brad Nelson and Luis Scott-Vargas. Their promise as future marquee players is a strong sign that the American resurgence isn't simply a flash in the pan, but something that will continue long after today's champions hang up their deck boxes.

Bill: When did you start playing, and how did you become involved with the game?

Gerry Thompson: The Invasion Prerelease was my first tournament. A buddy I worked with played. I was into comics and bought some packs of Portal.

Nick Spagnolo: I became a competitive player in Lorwyn, but originally I started around Invasion. I used to go to a local arcade, and the store owner there told me to play.

Ali Aintrazi: I started in Onslaught. I used to see people playing in school. I got my brother into it and started playing at a local shop, then we started going to tournaments.

Bill: How many Pro Tours have you competed in?

Calcano: This is my third. I had a near-miss at a run for the Top 8 at Pro Tour-Amsterdam, in contention late in the day. Ultimately I finished 33rd, making the Top 64.

Spagnolo: This is my third PT.

Aintrazi: Two, with my third being in Paris next year.

Bill: How many non–Grand Prix, non–Pro Tour large prize tournaments have you competed in?

Calcano: I haven't played that many. I would PTQ over them. I started playing them in Philadelphia last year, getting 2nd. Since then I've been to 8 or 10.

Thompson: I played 30-40, but I'll definitely be playing more of them next year.

Bill: What role have those types of tournaments played in your development as a competitor?

Calcano: Not necessarily just those types of tournaments, but all tournaments in general have helped me improve as a player. They're really why I'm as good as I am today.

Thompson: When I was up and coming, I learned SO much. These events make everyone very good, very fast. Not so much now that I have so much experience, but when I was starting those tournaments were big in my development.

Spagnolo: The events are above the PTQ level, but give you more benefit. At a PTQ you have to win, but at Top 32 in one of these events you can feel like you've accomplished something. You can get a loss or two and walk away with a prize. Even after you lose, you still have the fire to keep competing.

Aintrazi: They definitely made me better. Competition, especially in the Open Series, is very hard. It's harder to make a Top 8 there than at a PTQ.

Bill: What do you feel the role of such events is for the game at large?

Calcano: It means the game is a lot bigger. It gives non–Pro Tour players a chance to play for money. GPs have 1,500 players, so these give ... I don't want to say "worse" players, but non-pros a chance to compete for serious amounts of cash.

Thompson: Bigger picture, I'm not sure. It will make people better, faster and you can play whenever you want. There is a large tournament basically every weekend.

Spagnolo: I think it's an incredible impact. You don't have to be on the Pro Tour to play Magic. I'm not qualified for any Pro Tours next year, but I'm Qed for all three Invitationals.

Aintrazi: I think it's a very good thing for Magic. It shows the game is growing and more people are playing. It's definitely positive growth. The more money PTQ grinders can win, the better it is for everyone. This caters not just to the best players, but everybody.

Bill: What is the significance to you personally of your success as a champion or top level competitor at these events?

Calcano: Winning any tournament is big, but getting a trophy? I'm trying to think of the right words .... More people start to know you. Alex Bertoncini has made his name in Magic through StarCityGames.com tournaments. Everyone instantly knows who Alex is. It's more significant in that regard. More people know you.

Thompson: I think my Invitational title means more to me than my GP titles because the good players were more compact. Grand Prix tournaments are hard, but the Invitational is harder.

Spagnolo: It feels really great. Top 8ing four and winning three brought my rating up enough to qualify me for Worlds and gave me a big confidence boost after going 1-4 at Pro Tour—Amsterdam earlier this year.

Aintrazi: I feel more accomplished. It's blown up my name and popularized me. I've been able to start writing, first for ManaNation.com and now for StarCityGames.com. I don't think I could have done that without my success.

Bill: How did last weekend's StarCityGames.com Open and Invitational impact your preparation for Worlds?

Calcano: It definitely helped. I didn't do any testing for this event. At the Invitational, I got to play three different decks attempting to grind in and to learn them and how people play against them. I did that intentionally, and I feel I have a good grasp of the format coming in to this tournament.

Thompson: Playing Valakut in the Invitational helped me decide what I'd play at Worlds. Being a standalone tournament means almost as much as Worlds. After fifteen or sixteen rounds with my deck, I definitely feel more prepared this weekend.

Spagnolo: Absolutely it had an impact. You play for thirteen rounds for $50,000 so you get a real feel for your deck against people who are trying just as hard as they will be at Worlds. Plus the Invitational had the best players in the U.S. who weren't already in Japan preparing for Worlds.

Aintrazi: For sure. It was the same format! I feel like this metagame at Worlds is exactly the same as the Invitational, maybe with a bit more Valakut because Gerry [Thompson] won with it. I find it funny that the Invitational and Worlds has started to evolve to look like Magic Online. Usually it's a totally different ball game, but now it's bleeding into the real world. It just means the hive mind is that much bigger...