the start of Saturday, the coverage squad blanketed the draft floor looking for tidbits and draft stories.

Walking around the drafting area for Rochester number one, a few things quickly became apparent. 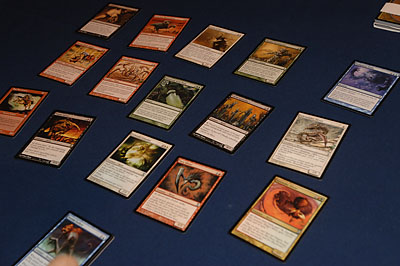 The increasingly rare sight of a Rochester Draft in action.

Knowing that the Americans had done some testing, I watched them draft, hoping not to assault my brain with stray "WTFs" so early in the morning. Early in the draft, the Americans were clearly winning the battle of the opens, plopping Magus of the Scroll and Kaervek the Merciless into their piles. They even managed to open a Teferi and put it into Paul Cheon's pile when his opponent had at least five playable suspend cards already in his pile. In the end, the Chinese decks seemed solid and they had an excellent rebel chain in the A seat to go along with the Disintegrate they opened their last pack, but the American decks in the B and C seats looked a little better, and Lundquist's match is certainly winnable. On the other hand, the Chinese have been surprisingly good for two Worlds in a row now, and you can't count them out.

There are a few key areas where this format can really punish the unprepared or reward those that know what they are doing. For the first draft of the day, I was interested to see which teams had put in the practice and formed a plan, and how said plans would work out. 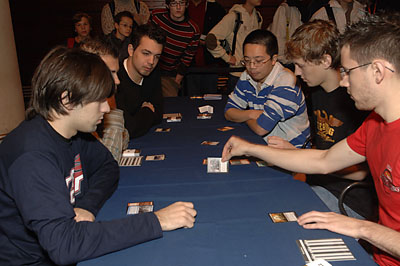 The Portuguese and Welsh teams try their collective hand at 'Team Roch.'

One great example of this was in the Wales/Portugal draft, where, in pack 3, Wales opened a Kaervek the Merciless along with Errant Ephemeron and Strangling Soot. Without a red-black deck in position to make the most of Kaervek, they took the two cards that clearly worked well in their decks. That allowed the powerful legend to make its way to Paulo Carvalho, who, in red-black, would happily run it against Welshman Jimmy Chung's red-green concoction. Chung would have a tricky time killing it on the cheap, with only one Lightning Axe in his pile at the time.

Had they let the Strangling Soot through, Jimmy's deck and its bevy of big monsters would not have been as worried by it, and as such taking (and potentially splashing) Kaervek would have been reasonable for Nick Lovett, who was paired off against Portugal's Joao Martins, who was running green/black.

Now, obviously I've got a soft spot for the Team Rochester Draft format, but I have to say I found the draft between Japan and Brazil fascinating to watch. The Brazilians were on the kickoff, so Paulo was the first to open a pack. Here's how the players were seated around the table.

With Brazil wanting green on the left, their opening pack had a huge bomb in Spectral Force to accommodate that plan, but Paulo had to first pick a Phthisis that wouldn't even end up in his deck. As so often happens in these kinds of drafts, that first pack showed pretty much everybody's colors (except Paulo). Very quickly it became clear that Paulo was blue/white, Elton was base green with options to splash into extra colors if needed, and Carlos was probably going to be black-red. For the Japanese, Mori was blue-white and Yamamoto was black-red.

The only problem with that plan was that it put Katayama, their player on the right (from their perspective) in green, right behind Elton who was also green. Given the flow of the draft directions, it would mean Elton would have far more first cracks at the most important green cards to come up, but in return it meant that Yamamoto would get to do the same thing to Carlos on black. That seems critical, because green is deeper than black and has more redundant cards, whereas black is more shallow and certain key cards are immensely important to get. It should come as no surprise then that Yamamoto was able to put together a very solid deck featuring multiple Strangling Soots with the ability to easily flash them back as needed.

As the draft continued, the main thing I was struck by was that I felt the Japanese were drafting better for their individual match-ups. For the Mori/Paulo match in particular, I felt that Mori was specifically drafting a blue-white deck that was faster and more focused, crafting it specifically for the blue-white mirror he knew he'd be facing, then rounding it out with the more important controlling cards like Errant Doomsayers and Telekinetic Sliver. Meanwhile, Paulo was passing up the kinds of cards Mori was emphasizing, ending up with (in my opinion anyway) a clunkier, less focused deck that featured aspects like four copies of Temporal Eddy.

(Don't get me wrong, I suspect I like the Eddy much more than most, but it's only at its best when you're using it to maintain an already established tempo advantage not trying catching up. In a slower deck Eddy often isn't as good because by the time it fires it's hitting creatures that cost less than four to try and keep up, which just means even more loss of tempo.) Another issue was an early Mawcor for Mori that Paulo could have a lot of trouble with. Despite that, Paulo drafted so many one-toughness creatures after the Mawcor that something like a quarter to a third of his spells are one-toughness creatures. Fortunately for him Carlos was able to hate out a second Mawcor, but I couldn't help but worry about all those one-toughness creatures should the Mawcor make a showing.

Temporal Eddy could keep it at bay for a while, but Paulo's deck didn't have much damage to force through during the time gain, which meant the Mawcor could just come back down and threaten much of his team. Fortunately for him by his own admission, a desperately needed Ixidron was nice enough to open on his side, giving him some badly needed creature control in combination with Conflagrate and Firemaw Kavu if he could make the mana work. Finally, I was very surprised to see him pass a Slipstream Serpent, a card that's deceptively good in the mirror for its finishing power and ability to mix up the guessing game combined with the Fathom Seers each player had. Mori snatched the gift when it came around, bringing his morph count to four in combination with Fathom Seer, Mawcor, and a Vesuvan Shapeshifter, another big blue-white mirror card that could have been in Paulo's deck but got to Mori instead.

Watching both the draft and deck building was telling. Whereas the Japanese were smooth and focused, the Brazilian team had many more issues getting the team to agree on picks. Carlos and Paulo repeatedly disagreed on cards for their individual decks, and though they were able to function, it was clear to any spectator that the Japanese were much more on the same page. A big part of that was Mori, who actually ran the entire draft. Though his teammates would weigh in with advice from time to time, it was clear that Mori was running their entire draft, making all of the picks for his entire team and orchestrating a very good set of decks in the process.