Feature: The Rocky Road to King of the Hill Glory

ay One's King of the Hill journey was a story of stability. Despite taking all comers round after round, it was only in the final for the day that Andrea Mengucci fell to Patrick Chapin, one of the two players carrying the undefeated flag into Day Two.

Starting the second day of a Pro Tour as King of the Hill meant only the best players – those vying and drawing live for a Top 8 shot – would receive the right to challenge. It was the truly greatest that could muster the courage, and record, to claim the throne.

Again, while the Block Constructed archetype for each player is noted, rounds 9, 10, and 11 were all about Theros Block Draft. Here, the two Day One undefeated players clashed with 40 card decks to decide the last one to stand without a loss.

Chapin's white-black deck was able to withstand No. 13 Ranked Player Josh Utter-Leyton's deck of red-and-green creatures, maintaining both a perfect record and a place upon the throne.

The tides turned for the undefeated king in the next round. Of course, it might have been just the populace conspiring to uprise as No. 2 Ranked Reid Duke, with an apparently self-proclaimed average black-green deck, toppled Chapin from his chair.

Proving his potency as ruler upon the hill, Duke dispatched the dangerous Joel Larsson to begin Day Two with a perfect draft. Players like Duke make it look easy to reign in style.

However, no king rules forever. In a rally to return to his comfortable throne of Day One, Andrea Mengucci had the chance to reclaim his title. In a thrilling on-video match, the populist champion Duke was dethroned. Mengucci was then the past and present King of the Hill once again.

Unlike on Day One, the crown of the king was not long for the bearer's head. Mengucci's R/G Elspeth deck had defeated Junk Constellation before, but it hadn't been in the hands of the famous French control player Guillaume Wafo-Tapa.

Patrick Chapin described part of his process in building decks to test in Block Constructed with "I started trying every combination of colors and thinking 'What would Wafo-Tapa do?' There just had to be something."

Renown for a reason, Wafo-Tapa toppled the returned Mengucci from the top. Though dethroned for the final time, Mengucci went on to claim his a Pro Tour Top 8 berth. The Day One king may not have been flashy, but his power didn't fade as it had for so many others throughout Day Two.

Whether prophetic or preordained, Chapin returned to claim the throne back as Mengucci had. In a close match that put the skill of both players on display, Chapin's Junk Midrange stole back the King of the Hill spot in the feature match area.

In facing another Junk Constellation deck, Chapin seemed prepared to handle the new interloper for the title, Nam Sung Wook. Unlike when it was at the hands of Wafo-Tapa, Chapin fell to the powerful midrange deck. But in taking the loss that boosted Nam into firm Top 8 contention, Chapin remained at the top of the standing to also claim a place. 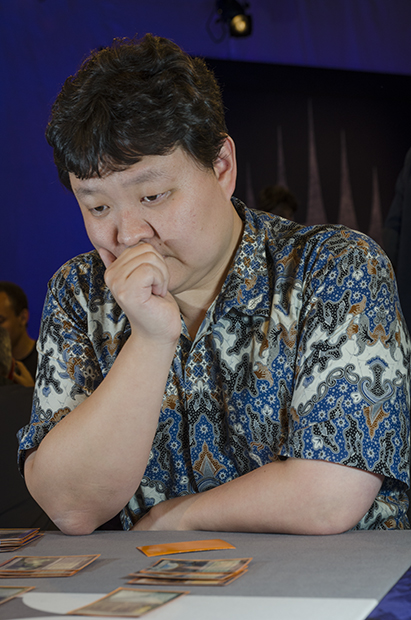 At this late stage it's still good to be king, win or lose.

Returning to claim the prize of King of the Hill wasn't on Reid Duke's mind: Agreeing to a draw with Nam ensured both players would return for the Sunday showdown of Pro Tour Journey into Nyx. It was a quiet, powerful truce to end the chase for King of the Hill on Day Two, but the stage was set for a star-studded Top 8 that would pass the crown on to end upon it's final, true owner.

Pro Tour champion is just another way to say Sunday King of the Hill, after all.