Coming into Pro Tour Avacyn Restored, Canadian Alexander Hayne was a Level 3 Pro Player with nothing more significant than a Finals appearance at Grand Prix Montreal earlier this season to his credit. Now he's made Platinum for 2012-2013, become the new Rookie of the Year, and, you know, won a Pro Tour.

"I didn't even realize that Rookie of the Year was still something I could win! I thought last year was the last one," Hayne admitted to me, still clearly unable to process what he had just accomplished. Not only is Rookie of the Year still a thing, but winning it places him in an elite club of players. Now he's joined the ranks alongside former Rookies of the Year Randy Buehler, Dirk Baberowski, Katsuhiro Mori, Masashi Oiso, Sebastian Thaler, and Yuuya Watanabe. These are players that have gone on to have great Magic careers after having breakout rookie seasons.

Now that he has locked up Platinum, Hayne plans to take advantage of it to do a bit more travel for Magic. "I can definitely see going to more events now. The Pro Tours, obviously, but I'll probably go to more Grand Prix events as well, especially in places I'd love to go. I've never been to Japan or Australia, so I'd love to go to a Grand Prix in either."

On the back of his team's White-Blue Miracle control deck nicknamed "Hallelujah", Hayne struggled a bit through the first day of play, needing a big effort in the draft rounds to keep his hopes alive. With a shot at Top 8 on the line, he pulled it together and ran his way through Day 2, even amassing a 4-0-1 record in the second Block Constructed portion of the tournament, all on the backs of his miracles. One of the most captivating things about his deck is the suspense that the threat of miracles brings to each draw step, leaving spectators and players alike wondering what the draw will bring. Just like all of the great topdecks from Magic past, miracles create memorable moments. And, just like the miracles he used to win his titles, Hayne has created a memory he's not sure to forget anytime soon. 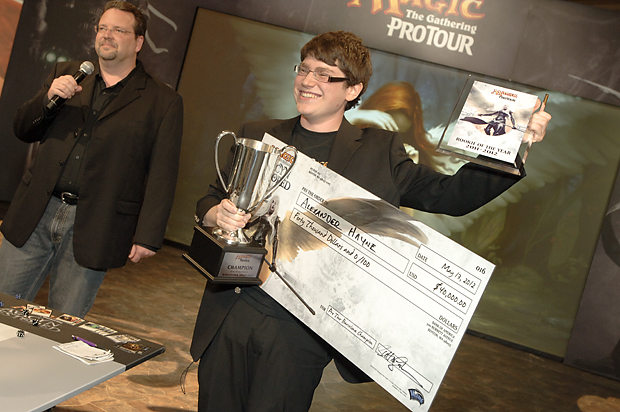 Congratulations to Alexander Hayne, the 2012 Rookie of the Year (and Pro Tour Avacyn Restored winner)!