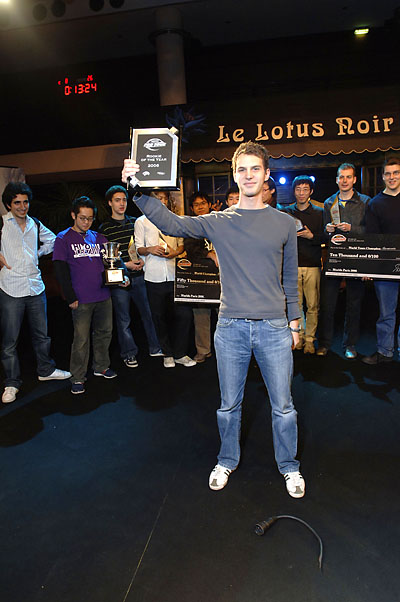 For 19-year old Thaler, the chance to win the title came as a pleasant surprise.

Sebastian Thaler heard that he had clinched the title of Rookie of the Year, the 19 year old German was overjoyed. Winning the Rookie race exceeded the young player's expectations: "My goal was a Top 128 finish here to get to Level 4," Sebastian said. But of course, the Rookie race never left his mind: "I also wanted to crack the Top 24 to maybe draw even with Suzuki and force a playoff."

But when Takahiro Suzuki was disqualified during the second day of competition, the car salesman from a village near Rosenheim realized that he could actually secure the title on this weekend. "I totally rejoiced," he said with his trademark smile on his face. At that point, the German was holding a 6-3 record. "I said to myself 'now I'm really going to put all my effort into it', and it worked," smiled Sebastian when he remembered that crucial moment in his tournament.

For the next season, the newly crowned Rookie of the Year has plans to continue his rise to Magic fame. "The six Grand Prix in Europe I will definitely play," he announced, even though he has to work out a schedule with his boss. "I don't know if I can go to all the Pro Tours". If he can seize some free days from his workplace, actually getting to the tournament won't be a problem: As Rookie of the Year, Sebastian gets a free flight to a Pro Tour of his choice. And because he reached Pro Tour Level 4 with his 27th place finish, he gets another flight - a benefit of his new Pro Level.

These extra pro points also mean a good chunk of money to Sebastian: "I earned about 2,000 US$ with my finish, and the extra level also gains me a thousand bucks." That's quite the money for a 19-year old, and with his win at GP Athens, that adds up to a very profitable past three months.

Some of that money will surely go into the party tonight, if only for a relaxed meal and drinks in the bars of Paris (where the drinking age is 18). Sebastian will be hanging out with the other German Magic pros, among them Aaron Brackmann and 22nd place finisher (and new gravy trainer) Rosario Maij. Coming to watch the team and individual finals this morning, his mind was set on next year's goals: "I really hope to make at least Level 3 again."

If he continues to play at the level he's at so far, that goal is certainly in reach, and maybe more! Asked when he will be the World Champion himself, the friendly and amiable German said half in jest, half in earnest: "2007, I hope!"