prior to the event there was a lot of talk of beatdown (particularly of the Boros variety) and murmurs of various control decks, be they 'tron-enabled Tooth and Nail or the 'not quite dead yet' Psychatog, one conspicuous area where a lot of Pros were quiet was on the subject of combo, beyond a few footnotes about Heartbeat Mind's Desire. 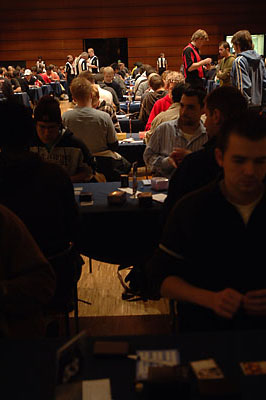 This is hardly surprising. Combo decks, with their flashy win conditions, frequently have a high power level, at the expense of being more vulnerable to disruption, either through good sideboards, or simply players knowing what is going on with a combo deck in advance.

So we probably had two camps of pros. There were those in the know, who were clearly letting nothing slip, and there were those who had nothing to let slip, as they weren't aware of various of the combo decks being a competitive force. Regardless of what people thought going into the tournament, there are definitely some combo options for those that like the 'one big turn' style of play for Extended.

Going around the room, it is pretty exciting to see stories gradually working their way around the room as players face various of the wackier decks being played today, and then engage in a game of telephone with teammates about what on Earth is going on. With each round, life gets a little tougher for combo decks in some respects - as their opponents have a better chance of being clued up and knowing how to attack. Alternatively though, for those that take a long time to go off, there is a better chance that opponents will concede to get more time in for games 2 and 3, which might make time less of an issue.

Billy Moreno's Goblins deck is to combo decks as Food Chain Goblins was some years ago, with one big bonus… the secret didn't get out in advance. This explosive Goblins build running Fecundity and various Ritual effects can happily 'do the Goblin thing', but on occasion it will have some pretty ridiculously explosive turns, going from no board position to a win within a single turn in combolicious fashion.

This creation of Sylvain Laureal dances a grim fandango that involves its pilot drawing their entire deck using various of the Odyssey eggs, accelerating mana with Reshape for Lotus Bloom, and then doing naughty things with Second Sunrise played a lot of times. Conjurer's Bauble allows it to be played as much as necessary, then Pyrite Spellbomb eventually finishes things off. If it sounds complicated, that is because it is. For unwary opponents, all that they can do is sit back and make egg puns once it starts going off, because at that point (provided it doesn't fizzle, as it occasionally does) it just kills people stone dead.

With storm reappearing in Time Spiral, it seems that combo will remain an ever-present element of the metagame, but with combo comes an information battle. As soon as people know about what's going on, the combo decks will need to adapt to deal with new sideboard tech. For now though, the cunning deck designers have done their big reveal and are riding their decks' rogue status as best they can.