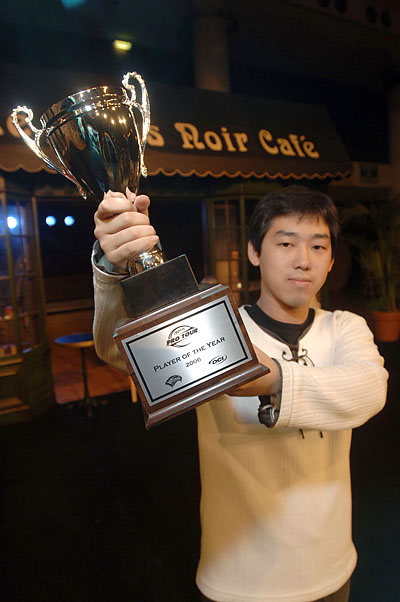 Yasooka took the title after a close scare Sunday.

been a pretty big day for the Japanese Magic scene. Not only did they finish second in the team competition and dominate the Top 8 in this year's World Championships, but the Pro Player of the Year is also from Japan. In the midst of the deconstruction of the feature match area, while our photographer Craig Gibson was snapping his pictures, I found a short while to sit down with Player of the Year Shouta Yasooka.

The 22-year old put down his trophy with care as he sat down at the table. The cup was at the center of his mind. When asked what he thought when the goblet was handed to him, he answered: "It's actually very light! And I'm very happy!" And it is, but of course the trophy only represents the benefits that Shouta will receive as Player of the Year. In addition to invites, Shouta will receive free airfare to every Pro Tour of the season as well as his own paid hotel room at each of those events. "I am also a Level 6 mage now," he said while tapping his trophy, as if to make sure it was real and not part of some wild dream. As a Level 6, Shouta will receive a $2,000 appearance fee for each Pro Tour he goes to, and even $500 for every Grand Prix. And that's before any prize money of course.

Shouta has set his goals high. "I want to repeat as Player of the Year," he proclaimed. It was an exciting day for him, figuring out only on Sunday morning that he actually had made it to the top of the Player of the Year race, when Tiago Chan and Paulo Vitor Damo da Rosa both failed to claim the Championship title. But the Japanese POY was confident that the two hopefuls would not actually catch up to him: "I was watching the big screen while they were playing, and I felt that they could maybe do it, but only maybe."

Shouta has racked up 60 pro points over the course of the last season, the highlight being his win with Kajiharu80 at PT Charleston. But the Player of the Year has to have more to his name than just a Pro Tour win to get the coveted title, and Shouta certainly delivered with 5 GP Top 8 appearances. His 158th place here in Paris gave him just two points, but since Tiago Chan and Paulo Vitor Damo da Rosa would both have needed a win, Shouta was fairly safe, though he got a little more excitement Sunday morning than he might have been hoping for.

Next year the race will be open again, but the winner will certainly be a Japanese player - says Shouta Yasooka. "All the Japanese are planning to travel to Grand Prix in Europe and America." He himself wants to attend six or seven GPs, seizing the opportunity to travel with his two favorite Magic players Katsuhiro Mori and Akira Asahara.

Before leaving to celebrate with his friends, Shouta let a little moment of grief enter his happiness: "Yamamoto made a number of mistakes in his team finals match, like choosing his attackers wrong. The Japanese could have won the title." Next year, they'll have another shot. And like so many others, Shouta Yasooka wants to be the one holding the big trophy in 2007: "Winning the World Championship title, that is my dream now."

(Special thanks to judge Yoshiya Shindo for helping with the translation work needed to do this interview.)