By Nate Price and Steve Sadin

If I said that two-time US National Team Member and Pro Tour Amsterdam Top 8 competitor Michael Jacob has a very unique approach to New Phyrexia / Mirrodin Besieged / Scars of Mirrodin Limited, that would be a serious understatement.

When I went up to MJ to talk to him about his deck, the first thing I asked him was how many lands he was playing.

"Fifteen, sadly," he replied. "I only got 1 Gitaxian Probe."

But that's crazy, isn't it? You need to play 16-18 lands if you're going to succeed in Limited, right?

Not always. Sure, you need a bunch of lands if you're curving into Alpha Tyrranaxes or Spire Monitors, but if you're playing a beatdown deck with a curve that stops at three, you can comfortably cut down on your mana sources.

While many top players are slowing their Draft decks down to the point where they're playing Hexplate Golems, MJ is busy looking for ways to win long before his opponents' most expensive spells hit the board.

"I think that Forced Worship is borderline unplayable, and Hexplate Golem is a joke. People are playing decks that are filled with terribly inefficient spells and around 18-20 mana sources. Meanwhile, I'm playing the most efficient cards in the format and a reasonable number of mana sources."

MJ started off the draft by taking a Volt Charge over Grim Affliction, then he 2nd-picked an Inquisitor Exarch (yes, really) out of a fairly weak pack. After that, he grabbed a Porcelain Legionnaire and a couple of Suture Priests, a card that MJ values very highly.

"Suture Priest is the most important card for this type of deck and it's one of the only cards that I'll take over a Phyrexian-mana creature or an artifact. If I don't see any Suture Priests in the first six or seven picks I won't even bother"

While MJ has had a lot of success drafting white beatdown decks, he is able to rack up the wins because the cards that he wants are extremely undervalued, not because the archetype is inherently overpowered.

"I like to wait for as long as possible before committing to a color. In a practice draft the night before the Pro Tour I first picked a Pith Driller over a Life's Finale and I didn't regret it for a second. By waiting to commit to a color, I make sure that I'm drafting a deck that's actually open. Depending on what I get tabled I'm usually able to figure out what I should be drafting. If I see Glistener Elf and Razor Swines coming around late, I'll go red-green infect. If I get a late Blind Zealot, I'll go black. If I see Shriek Raptors and Lost Leonins making their way to me eighth and ninth pick, I'll draft white infect. And if I see a Suture Priest and there isn't a top notch removal spell in the pack, I'm going to take it."

"Even if I move into a first color early, I want to wait until at least my Mirrodin Besieged pack to commit to a second color. That way I'll be able to draft and use any bomb or removal spell that I might open."

MJ then proceeded to explain that he felt like this draft deck was three or four cards off from where he wanted to be.

"You don't really need Equipment for this type of deck. Piston Sledge is really good, and Copper Carapace is okay, but Viridian Claw is pretty weak. I would have preferred it if I had just gotten another creature, but sadly there weren't any."

MJ then gestured to his Immolating Souleater.

"I like Immolating Souleater a lot. If he is unblocked, I'll often pay 10 or 12 life to pump him up on turn three—a big hit like this makes it significantly easier for me to close the game out before my opponent can take over."

MJ then likes to top off his curve with a couple of burn spells that he can use to finish off his opponent.

"Necrogen Censer is really good in this deck. If I have a couple of Necrogen Censers and some ways to proliferate, such as Volt Charge, or Fuel For the Cause depending on what colors I'm playing, or a way to completely reset it such as Glint Hawk, then I shouldn't have too much trouble killing my opponents even after they think that they've stabilized."

So if you're looking to beat down in New Phyrexia Limited and you have the chance to pick up a couple of Suture Priests, you should give this deck a try! 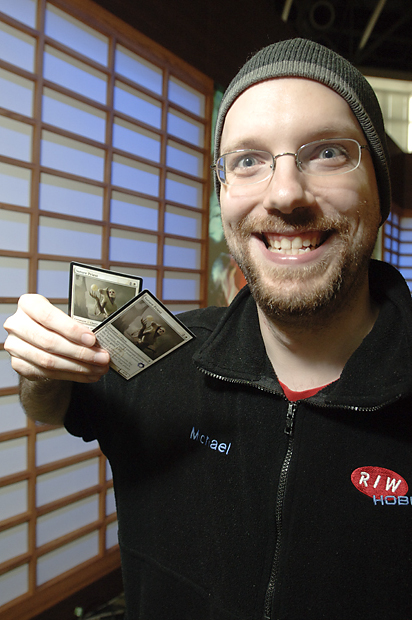