Wolfir Silverheart has quickly established itself as one of the defining cards of Innistrad Block Constructed. If you have a creature to soulbond Wolfir Silverheart with, then you're going to add twelve power to the board for only five mana. And if your opponent doesn't have a way to deal with your positively huge soulbond creature, then they aren't going to be long for this world.

After watching Wolfir Silverhearts run wild throughout the first few rounds of the Pro Tour, I sat down with two players who will be competing at the Players Championship this August to ask them how Wolfir Silverheart impacted their preparation and their deck choices.

Wolfir Silverheart is easily the defining card of this tournament.

Reigning Player of the Year Owen Turtenwald was so impressed with Wolfir Silverheart that he didn't even spend much time considering playing a deck without the gigantic Wolf Warrior.

"We spent the bulk of our time testing decks with Wolfir Silverheart in them. There's so little removal in the format that you just want to play the best creatures – and there isn't really anything better than Wolfir Silverheart."

While Owen made sure to play a deck with the enormous Wolf, reigning Magic Online Champion Reid Duke ultimately settled on a White-Blue-Red Control deck.

"Wolfir Silverheart is the best card in the format, but I don't really like the cards that you have to surround it with. Plus, I think that Wolfir Silverheart decks are a very attackable strategy, and I'd prefer to be the guy attacking it." 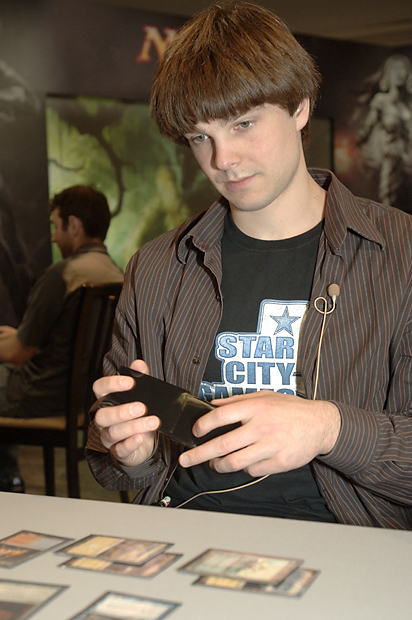 Players like Reid Duke felt that the Wolfir Silverheart strategies were beatable, and they chose to sleeve up controlling options to prey upon the creature-heavy decks here this weekend.

When asked how he plans to beat Wolfir Silverheart decks, Reid pointed to two cards: Terminus and Gisela, Blade of Goldnight.

"Terminus is a no-questions-asked way to wipe the board – and if it's turn six, and you have a clean board against a green deck with no burn in this matchup, then you've just about got the game locked up."

While many players decided to go with Wolfir Silverheart decks because of how fast they are, Reid explained that he wasn't even that concerned about the speed of the White-Green and White-Green with red decks that he has been facing.

"Sometimes if they're on the play and they have an unanswered accelerator, then they can beat you before you get the chance to clear the board with Terminus. But that usually doesn't happen as I have a good amount of removal, and I always have the potential to just miracle a Terminus. And if you can live long enough to get a Gisela, Blade of Goldnight into play, then it's really difficult for them to get through for any significant amount of damage."

Stay tuned all weekend long to find out!