For the whole of the pre-event gathering of players Thursday, wherever two or more players happened to clump together, the discussion would inevitably turn to what they were expecting to see on Friday morning at 9 o'clock—what decks were people going to play in a field that seemed wide open? If you were to speak to a dozen groups of players, you had a fair chance of coming away with a dozen different answers to what the best deck was, what they expected the metagame would be, and late sideboard technology. Even after several hours it still felt as though the only real certainty was that everyone was uncertain about what they would find when they woke up the next morning. It's fair to say even the best guesses of the most astute players were wide of the mark.

"Day One of Pro Tour-Valencia has been cancelled."

Just how do you tell roughly 800 people NOT to turn up for a Pro Tour? It's not easy—players are scattered in hotels all across Valencia, and worse yet there would be hundreds of local Spanish players heading over during the day for the scheduled PTQ, the many side events, the artist signings, or just the chance to come and watch the Pro Tour players do their thing. 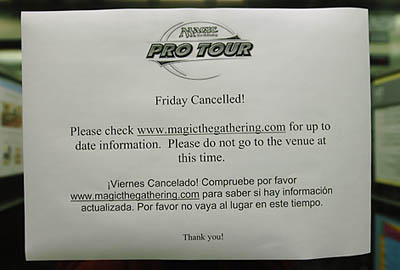 This message greeted many players Friday morning.Putting the announcement that Day One was cancelled on the front page of magicthegathering.com (along with alternative channels including Facebook, LiveJournal, and IRC) was a start, and picking up your phone to call everyone you knew in Valencia and asking them to phone everyone else that THEY knew would catch even more players, but it was immediately apparent that there would be a steady stream of players heading to the venue regardless of the weather, and somebody needed to be set up outside the front gate to tell them the good news when they arrived. A few brave judges and staff saddled up and headed out to the front gate of Ciudad De Las Artes Y Las Ciencias, and among those leading the charge was Richard "Podcast" Hagon from the coverage team:

"The players were amazing," he recalled. "Nobody got angry, nobody shouted or complained. They all listened quietly, understood that what we were telling them was genuinely the best that we could do, asked really sensible questions when they occurred to them, and then headed off back to their hotels to watch the Internet for updates. They were absolutely fantastic. When you first tell somebody 'no Pro Tour today' they look at you as though you'd grown a second head, and myself and the other staff down here go to see that face a lot this morning. It wasn't hard for the players to see that we'd had no choice in cancelling—all they needed was to peer in through the windows and they could see that the venue had been trashed."

The reaction of virtually every player was shock, but for many players there were very real concerns. Beyond being "just" an enormously prestigious Magic tournament, the final Pro Tour of 2007 before Worlds could be pivotal for the Player of the Year race, had drawn many other players chasing their Players Club levels, and could turn out even worse for players who had already booked their flights out of Valencia and needed to know if they should rearrange them.

"Instead of being angry and confused I think a lot of them were initially just frightened by the idea that there might not be a Pro Tour at all!" Hagon said. "But once we'd explained that it was possible to run a two-day Pro Tour, kind of like a big Grand Prix, just so long as the venue could be cleaned up and made safe, they came around—they could see what we were up against. Genuinely I'd like to give a huge thank you all the players who had made the trek through the rain for the way they reacted to being told to turn around—we actually ended up having a few good laughs about the whole thing!"

And while the uncertainty about the metagame, the best decks, and the best sideboards will now be beginning again, some things are already certain. It's certain that history has already been made in Valencia this weekend, and also that we have experienced Magic: The Gathering's first ever Pro Tour to have a keyword ability of its own: