By By Paul Jordan and Tom Martell

A field of 218 players showed up to U.S. Nationals with 18 different types of decks. As expected, Faeries took up about a quarter of the field. Elves and Merfolk, the next two most popular decks combined to split another quarter of the field. Mono-red Aggro, Reveillark, Red-green Big Mana decks and Quick 'N' Toast were the other mentionables. Below is a complete breakout. 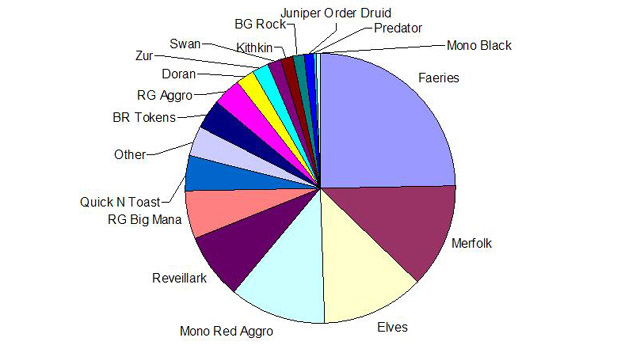 Of the players qualified, about two-thirds earned their qualifications through Regionals, City Champs, or Grinders. The remaining third qualified based on Pro Points or Composite Rating. Most of the deck choices were consistent between the "Pros" and "Joes," but there were some interesting exceptions. Merfolk decks were very popular among the Joes, representing 17 percent of their decks. Only 3 percent of the Pros went with the fish. The pros favored Quick 'N' Toast (played by 8 percent) and Elves (6 percent).

Stay tuned to continuing coverage and analysis of both the Constructed and Limited portions of the event.