Three hundred fifty-two players sat down Day 1 of the 2010 World Championships in Chiba, Japan. Standard was the first of three Constructed formats to be played during the four-day festival. How would the metagame look with the season winding down?

The next two most-played decks were both control decks. Blue-White Control and Blue-Black Control had 59 and 51 players, respectively. Each used blue for countermagic and Jace, the Mind Sculptor. The choice of pairing this with white versus black was made purely on the removal package. Day of Judgment and Journey to Nowhere were the common choices in white while Doom Blade and Consume the Meek played similar roles in black.

We saw the first creature-based aggro deck come in at fourth place with Vampires. Bloodthrone Vampire and Viscera Seer made the leap from the Limited environment as they were recorded on 28 of the players' 60-card decklists. The synergies of these sacrifice outlets paired with Bloodghast and Kalastria Highborn created the potential of ending games in a hurry. Most players splashed red for removal while a small number decided on a mono-black design.

Rounding out the top five archetypes was Red-Blue-Green Control. Commonly referred to as RUG, 22 players crammed together all the best cards in Standard into one very powerful package. Jace, the Mind Sculptor and Oracle of Mul Daya provided the card advantage, Lotus Cobra and Explore accelerated its mana base, and your choice of Primeval Titan, Frost Titan or Inferno Titan were used as finishers.

These were only the top five archetypes here in Chiba. Five more archetypes accounted for upward of five percent of the field each, including Quest for the Holy Relic, Boros , Genesis Wave, Red Deck Wins and Mono-green Ramp. Eight more archetypes made up over 19 rogue lists. Which of these decks would help carry its pilot to a birth on Sunday? Find out in the days to come. 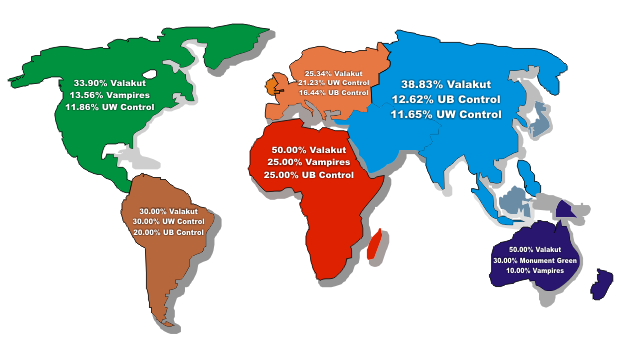 A breakdown of the top three deck archetypes by region.