Feature: Standard By The Numbers

By by Paul Jordan

Pro Tour–Hollywood has come and gone. Charles Gindy reminded us what Sol Malka tried to tell us so many years ago and Uri Peleg confirmed last December: green and black is an extremely powerful combination. The Pros are done with Standard for now (with the exception of a Grand Prix in Buenos Aries) and are leaving it to those of us looking to earn an invitation to our National Championships. If you're one of those many, you've probably busied yourself with the task of reading and re-reading the coverage from the Pro Tour, looking to learn what the Pros thought and how they made their deck choices, and trying to get the benefits of their hard work while also trying to see what went wrong.

I have taken this information directly from the coverage, copying each round's results into an Excel file and then adding in the deck choice of each player (thanks to all the decklists being posted). As is frequently the case, the winning deck is not necessarily the winningest deck. The more popular a deck is, the harder it is for that deck to have the best winning percentage. Without any further statistical generalizations, let's get to the numbers. First and foremost, a breakdown by archetype:

No surprise here, Faeries was the most represented deck at the tournament, and by a significant margin. Looking a little closer though, we can see that there are several decks that fall under a broader umbrella of archetype. When we widen the camera lens, we see a different story: 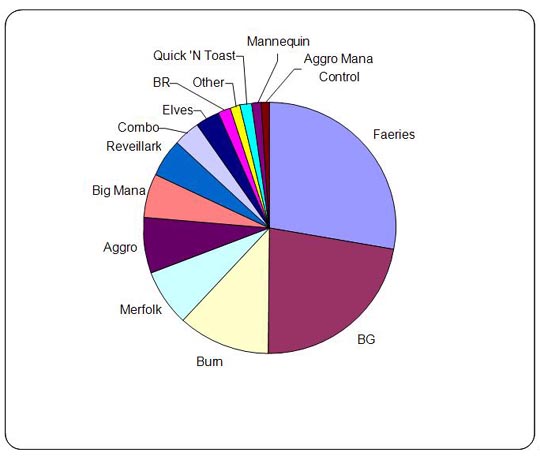 Rock-like decks narrowed the gap with the Fae, though still falling short in the popularity contest. Look at the difference in average ranks: 185 vs. 202. Black-green decks averaged almost exactly a middle position (371 players). That translated into about $1,100 per Black-green player. Of course, about half of that all went to one person. The story gets even more interesting when we look at the split between Days One and Two:

Faeries showed the biggest change in representation, dropping almost 6 percent of the market share. That slack was mostly picked up by Merfolk, with Reveillark, Black-red, Quick 'N Toast, and Aggro Mana Control decks all pitching in. Other notable losers are combo and straight aggressive decks. Rock-like decks, while losing marginal ground on the field as a whole, jumped up into a tie for most-popular. They have a shot at homecoming queen after all!

So we have a pretty good sense of what the landscape of the tournament was, now let's start getting to the fun stuff: how did these decks perform? Bear in mind that all win percentages were done excluding mirror matches (which, by definition, will be 50 percent).

Or broken out by our familiar categories:

Well, I don't know about you but I certainly didn't think Faeries were going to be the fourth-worst deck choice, behind the ubiquitous "Other." A surprise "best" deck shows up in Quick 'N Toast. I'm going to hesitate to call it the best deck though, for a couple of reasons. First, let's be honest for a moment. There were five players playing the deck, some of whom you may have heard of: Guillaume Matignon, Manuel Bucher, Guillaume Wafo-Tapa, and the brothers Ruel. The deck had a pretty impressive pedigree in its favor, boasting close to 900 lifetime Pro Points. Any deck whose entire pilot crew has an average of 180 Pro Points is doing just fine. So, while the deck certainly did well, I'm going to go on the record as saying that it is very likely that there were some games where the deck underperformed but was pulled through by the pilot. Second, it was a surprise deck, especially in Day One. Nobody had ever heard of it, nor knew how to play against it. As time went by and people learned what was in it, they got better at playing against it and the win percentage went down. Don't believe me? Take a look at this:

Quick 'N Toast won close to 70 percent of its matches on Day One, which dropped drastically to 57 percent on Day Two. That's still a very strong showing, so don't discount the deck entirely...just be aware that some of the surprise factor has been washed away.

Looking at the rest of the field, it appears that Reveillark, Mana Control, Black-red and Elves decks performed best. Our winner, Black-green, ended up at just a shade over a 50/50 pick. Notice that of the top five performers, Reveillark is the only one to represent more than 5 percent of the field. These decks were, by and large, unexpected or unplanned for by the population. We're going to examine each of these, in addition to some of the more widely used strategies to see where their strengths and weaknesses are.

With Q'NT, we can see that there was absolute dominance of Black-green, Big Mana decks, and Burn decks. It had decent game against Faeries, and nothing exciting against Merfolk. No truly bad pairings are apparent.

Reveillark went the opposite direction of Toast, bringing some serious game on Day Two to the tune of almost a 9 percent better win percentage. Day Three? Don't ask. Reveillark is very solid against most of the possible pairings, but there are two very dubious ones lingering in there: Faeries is a bad matchup, and Merfolk is just miserable. Those two accounted for about a third of the field.

A consistent performer across both days, the mana control decks (featuring Magus of the Moon and Deus of Calamity) were positioned well to take advantage of a Faerie-heavy field. Look at these numbers though, and you see some very dominating numbers followed by some very depressing numbers. This is a pure metagame deck. If you're expecting Merfolk and Faeries, bring some forests and mountains. If you think it'll be Black-green and Reveillark, it's best to leave them home.

Here's a deck that correctly anticipated the amount of Rock-esque decks showing up and probably was hoping a good number of Faerie decks wouldn't make it to Day Two. Those hopes were not realized however, with more matches against Faeries in Day Two than Day One while less total matches were played. That led to the 60 percent / 53 percent split for Days One and Two.

Talk about a Day One deck! From eight points on the good side of 50 percent to seven on the bad side! This one is truly baffling. It wasn't the result of playing all good pairings on Day One and bad ones on Day Two. These were with very similar pairings: 65 percent against Faeries on Day One, 40 percent against Faeries on Day Two. It would seem that there was a learning curve against these decks. It should be noted that these are the monogreen and token variants of the elf decks, not the Rock-like black-green ones. It is possible that people just "figured it out" after playing against and/or seeing some matches.

The dark cloud that was hanging over the Standard metagame prior to the Pro Tour has been lifted, and this is how. Fairy decks cannot handle Burn, Elf, Merfolk, Mana Control, or Rock decks. They can, however, handle just about everything else. If you have your Bitterblossoms and are determined to use them in Regionals, you should be looking at shoring up those matchups.

And here is your champion. The most stunning thing to me in looking at this is the huge gap from Days One to Two in how Rock-ly decks handled the Fae. It was plus-16 percent against the same deck, both with ample matches played (so no low sample-size explanation) seems very suspect to me. It is hard to imagine that they just figured out how to play against Faeries, as that was presumably the deck they spent the most time testing against. I have to guess that something else was at play here, perhaps the Black-green decks in Day two simply had better prepared sideboards.

Also interesting is that Rock-ing decks were sufficiently owned by Reveillark, but failed to win the most important match in the Top 8.

Here's another deck that started off strong but fell down on Day 2—most of it is from an 8.5 percent dropoff against Black-green and a 32 percent (gulp!) dropoff against Burn decks between days. If those two matches had remained steady, Merfolk would have maintained its overall 53 percent winning percentage. Big Mana, Burn, Aggro, and Elves were unsurprisingly the biggest headaches for the fish.

Burn was the third-most played category archetype in the field and showcased a significant advantage against a couple of the most-played archetypes. However, sub-.500 records against Reveillark, Big Mana, and Black-green didn't help its cause. But it sure taught Faeries a lesson or two!

Finally, I wanted to see if there was any kind of relationship between a deck's performance and the stage of the tournament. Below are some of our Top 8 decks and how their categories did throughout the tournament. 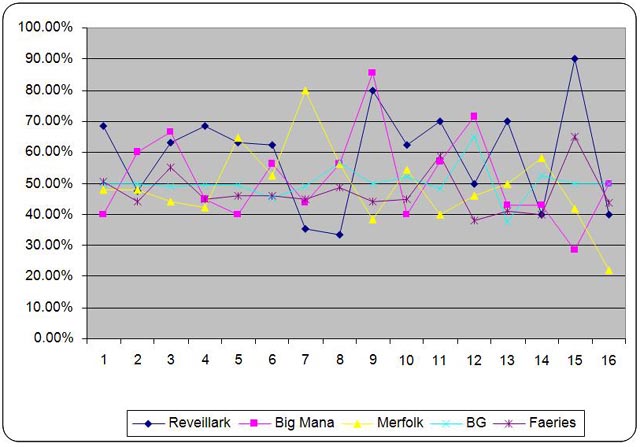 Nothing really concrete shown here. Black-green seems to be the most consistent, hovering around 50 percent for the duration with the exception of a hiccup in Rounds 12 and 13. Big Mana was on the biggest roller coaster throughout the tournament.

In the end, there was no deck that was a clear favorite against the entire field. Quick 'N Toast and Reveillark both were close, but had some holes to fill in. Good luck at your Regionals, I'm hoping to get some data for analysis on those tournaments so hopefully you'll be hearing from me soon.