Six years ago, Magic first visited the plane of Ravnica. We were first introduced to the guild system, hybrid mana, and Dark Confidant. We were also introduced to a little known Czech player by the name of Stanislav Cifka. At the time, the nineteen year-old Cifka had been playing Magic for a few years.

"Magic back then was just something I played in high school with my friends. Prague was my first Pro Tour," he says with a laugh. "It was Ravnica Block Booster Drafts!"

Cifka's Pro Tour debut wasn't the most auspicious of beginnings, finishing in 348th place, but there was plenty more in store for Cifka. All he needed was the right push.

You see, Stanislav Cifka is an international chess master, at points in his career ranking as the best junior or player in the Czech Republic. He is good enough that he played a game blindfolded against the trio of Martin Juza, Lukas Jaklovsky, and Lukas Blohon, where he reached a point roughly twenty turns in where he had checkmate in less than a dozen moves. They asked him to switch pieces from that point, and then had them in checkmate again, from the other side within ten moves. 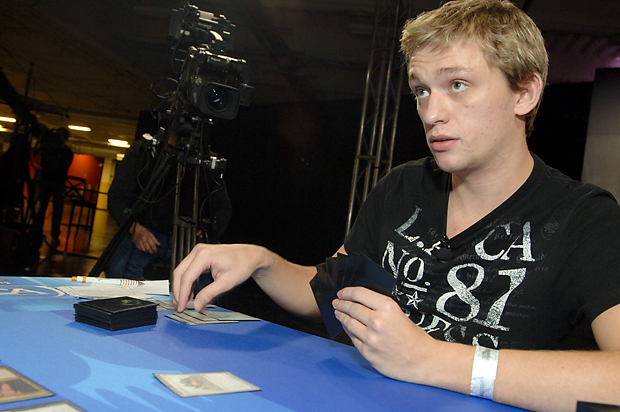 Stanislav Cifka is an international chess master, but he's been proving to the world that he's also a Magic master this weekend.

When he was about 12, Cifka found Magic. It was Invasion block, and he found the game intriguing, but at the time, it was still just a game. As time passed, he was eventually convinced to begin attending tournaments, though found little early success. His first big thrust forward came at Pro Tour Prague in 2006, where he earned his right to play through the Last Chance Qualifiers the day before the Pro Tour. While this afforded him the ability to play in his first Pro Tour, it also ran until the early hours of the morning, as was common. This left him little time to sleep, and Draft had always been one of his weaker skill sets. Needless to say, he didn't fare too well. Still, he was bitten by the bug.

Magic took a back seat to chess and eventually poker, as Cifka began to play professionally.

"I was playing poker to pay my bills for some time there. But, when you are playing twelve or so hours a day, constantly crunching numbers and doing math, at some point it becomes exhausting. It stopped being fun."

This was somewhat of an ironic statement considering how he and the other Czech and Slovakian players prepared for this event."

And then this section right after 'I will find myself making occasional mistakes when playing in person, like playing an extra land when I don't mean to, and Magic Online won't let me do that, hah."

"Confronted about the similarities between the long days of poker and grinding on Magic Online, Cifka just laughed.

"Magic is just fun. I really enjoy the game, all of it, and I don't get tired of it."

"Leading up to this event, I have been playing Magic Online for about eight hours a day. Honestly, I'm not that big a fan of traveling, which is hilarious considering how much travel I have had to do. I just feel more comfortable with Magic Online. I will find myself making occasional mistakes when playing in person, like playing an extra land when I don't mean to, and Magic Online won't let me do that!"

It had become fairly common knowledge that Cifka's tendencies in Draft were a bit on the... alternative side. Martin Juza commented earlier with a laugh that Cifka should be nicknamed Stanislav "The Draft Viewer Must Be Broken" Cifka. Juza cited aggressive mana bases, contrary card evaluations at times, and simply out-of-his mind thinking as a rationale for the nickname. But even he can't argue with the results.

"We talked to Stan today about his draft decks from this tournament and just didn't understand why he was picking the cards he was. He was really confused. He asked if we would've made any different picks, and we told him, 'well, probably only like twenty or thirty of them.' And then he told us, 'I don't understand. I went 6-0, 12-0. How did you guys do?' Um... we didn't have a good answer for that." 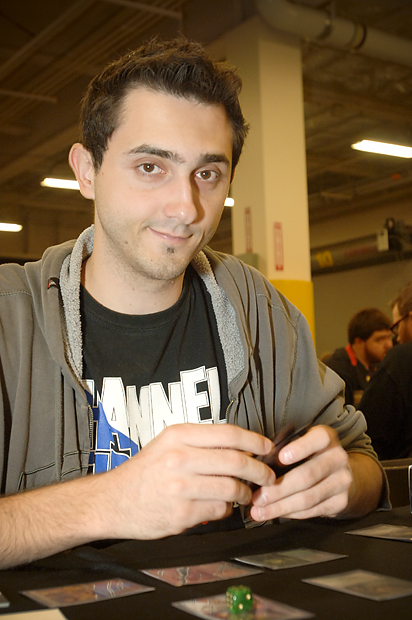 Martin Juza and the other Czech pros have given Cifka a ribbing about his draft choices, but with their friend's astounding record here this weekend, Juza is happy that those choices are paying off.

Even Cifka admitted that at one point, drafting was really not one of his strong points.

"I have always enjoyed Constructed a little more than Limited. I was better at it at least. But I decided last year that if I was going to take this seriously, I was going to need to round out my skills. So I have been taking this last year and really trying to work on my drafting ability."

After his performance here at Pro Tour Return to Ravnica, it's safe to say that whatever work he did was well worth it. And the good-natured ribbing that the other Czech and Slovakian players give him is all in good fun. They are all good friends and a major key to his success.

"I started taking Magic seriously because of them. Juza asked me to come with him to a Grand Prix last year, and I figured that it sounded like a good idea. After that, I started going to more tournaments and really getting frustrated with myself if I didn't perform as well as I thought I could have. Eventually, I made it Czech Nationals and finished in second place. At that point, I decided I wanted to work on this even more and continue to play. Preparing with Robert [Jurkovich], Ivan Floch, Juza and the rest has been very fun. We played together last week in [Grand Prix] San Jose and did well. We got a place here and had fun preparing together for this event."

The close-knit group of Czech and Slovakian players has proven to be an incredibly potent force on the global Magic scene over the past couple of years. The Slovakian team was simply awe-inspiring when the lineups for the World Magic Cup were announced, meaning that their best players attended separate Qualifiers and won them. They had the most concentrated team as far as skill went in the entire event. Ivan Floch, Lukas Jaklovsky, and Cifka finished in fourth place at Grand Prix San Jose last week. And, as Martin Juza correctly pointed out earlier in the weekend, there have been two or more Czech or Slovakian players in contention for Top 8 late into every Pro Tour in the last year and a half. The region is producing some of the finest players in the world right now, and it is all culminating with this dominating performance by Stanisav Cifka, who truly is deserving of the title International Master.