That's not a phrase any player would want to offer about their draft, and certainly not one you'd expect from Pro Tour Hall of Fame and No.4 Ranked Player Ben Stark. His array of aggressive white-red cards wasn't anything to write home about – though it was serviceable for a 2-1 record to start the day – but you'd be mistaken to take this deck from Stark and assume Limited is a weakness. 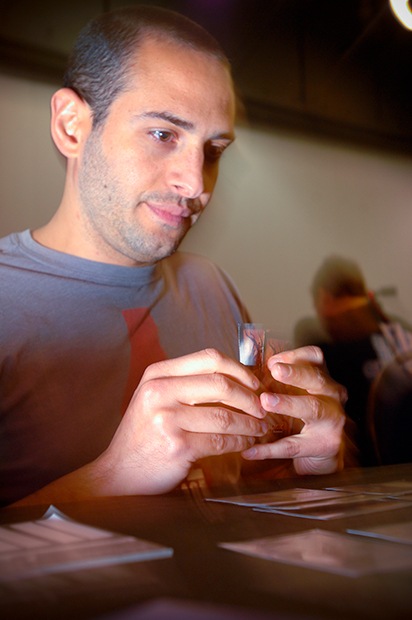 Pro Tour Hall of Fame and 4th-ranked Ben Stark is one of the game's elite Limited players.

As one of the preeminent Limited masters of the game, Stark is a beacon of drafting knowledge and skill. Year after year, format after format, he finds strategies that his team, ChannelFireball, uses to great effect. With a Pro Tour – and the Pro Points, prizes, and glory that go with it – on the line, we wanted to know what he had come up for the weekend.

Given Theros and Born of the Gods have been played for some time, what's the biggest change that came to Booster Draft by adding Journey into Nyx?

"The colors are more evened out," Stark said. "Red was the worst in Theros. Now red has a lot of commons you'd like to play. I feel like all the colors are balanced, where it can support two-and-a-half people per color at the table."

Are there any key archetypes?

"There are fewer archetypes than straight Theros," Stark explained. "It isn't archetypical, unlike Theros where you wanted to be heroic, or playing something like multiple Grey Merchant of Asphodels. Journey into Nyx has more interesting cards that are synergistic with others. I don't think you should be trying to draft and archetype: You should be drafting cards that work together. You should draft colors and a good curve – the usual Limited suspects."

Are there any key commons in Journey into Nyx players should watch out for?

"There aren't key commons," Stark said. "I'll take cards like Golden Hind or Magma Spray – good cards – but I'm just in a color. I don't feel like there are key commons that have to be in decks."

Without specific archetypes or commons to look for, how do you approach drafting then?

"You look for cards that work well with others, like enchantments and enchantment creatures," Stark said. "Some things, like bounce (spells that return permanents to a player's hand), is at a premium. Finding value in your cards is more important. If Divination was in Theros I wouldn't have played it, and I didn't like playing it in Born of the Gods, but here I will. Having a solid curve is nice. You don't need eight two-drops, but like four or five work fine. It's more like Sealed in that you're not building specific archetypes, but it's not going to be as sloppy either.

What's been the most surprising thing about Theros block Booster Draft for you?

"I love the bestow mechanic – it felt new and refreshing," Stark said. "Limited is great but can be repetitive for someone who has played as long as me. This format has felt unlike anything I've played before."

Is there anything else to know about drafting Theros block?

"Don't force decks or colors," Stark explained. "It's generally bad but in this format none of the colors are particularly better than the others. You should be able to draft and play any color deck."

What does a deck without "any good cards" that goes 2-1 at a Pro Tour look like?

The deck contains six two-drops, six three-drops, and a few smaller and larger on either side backed up by a few enchantments and strive tricks. Stark described the deck as "bad on paper," but that straightforward curve and plan was enough for this morning.