Feature: Team MTG Mint Card – The Journey of a Lifetime

raditionally, when you think of Asian Magic, Japan is the first thing that springs to mind. After all, it's the home of some of the best players to ever play the game, including multiple Hall of Famers. It's served as the venue for numerous Grand Prix and Pro Tours and has hosted some of the most memorable moments in Magic's history. What doesn't immediately spring to mind is Singapore. Or Hong Kong. Or South Korea.

The Asian Magic community has historically been sort of isolated from the rest of the Magic world. Since the majority of the game's focus was initially centered on North America, it was hard for the early Asian players to learn the game at a high level, to get access to the resources needed to succeed, and to generally raise the level of their game to match the level of play seen by the older players in the Americas and Europe. Over time, the growth of the Japanese Magic community spawned some of the fiercest competitors ever seen at the Pro Tour level. Yet the level of competition from the rest of Asia lagged behind.

Enter Magic Online. Possibly the greatest thing to ever happen to Asian Magic, Magic Online closed a lot of the distance that existed between the top-level communities in the world and the ones seen in some of the smaller countries of Southeast Asia. You began to see gradual increases in the level of play, more success at the upper levels of the game, and, eventually, champions.

Still, the game has become so competitive that it can be hard to properly prepare to succeed at the professional level without the support of a strong team. Rituals like traveling to a Pro Tour a week in advance to testing, renting gaming houses for weeks on end, even taking a cruise a la Team Mana Deprived have become the norm. In addition to geographically making it easier to prepare for a Pro Tour, one of the biggest impacts teams have is to concentrate top talent in one location, which drives up the individual skill of each player on the team.

Simply put, the communities of many of the Southeast Asian countries are just smaller than the communities of most of the other regions in the world. Enter Team MTG Mint Card. Originally rising to recognition through the efforts of Chinese Taipei's Tzu-Ching Kuo and Hong Kong's Lee Shi Tian, MTG Mint Card has blossomed into one of the top teams in Magic, deserving of recognition alongside the other big boys of the game. The team has gone through a number of roster changes from Pro Tour to Pro Tour. This season, they notably worked with Japanese master Ken Yukuhiro for Pro Tour Born of the Gods, eventually putting Lee Shi Tian into the Top 8. Their other notable pickups were two little-known professional players from South Korea: Nam Sung Wook and Jun Young Park. 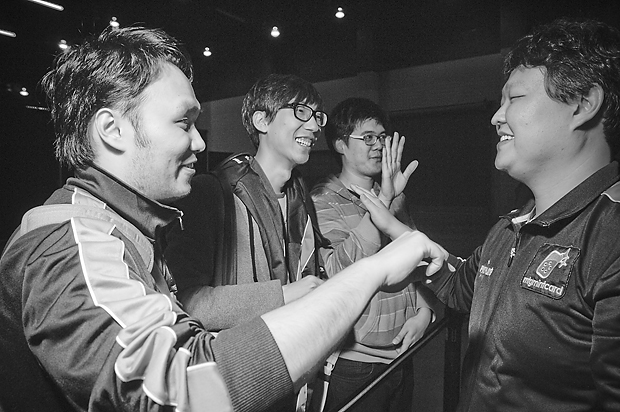 Team MTG Mint Card has become the shining force behind Asian Magic on the Pro Tour.

"We set out to recruit them to join the team after Pro Tour Theros," Singaporean Chapman Sim relayed to me. "We wanted to work with them for Pro Tour Born of the Gods, but they weren't able to join with us then. We finally got them together here, and it has obviously worked out well for us."

It certainly has. This weekend, Lee Shi Tian locked up Platinum status for the year with his Top 64 performance. Outdoing him was Korean Nam Sung Wook, who made it all the way to the Finals before succumbing to Champion Patrick Chapin. That Finals appearance gave Nam enough points to effectively lock up Platinum by just arriving in Portland in a few months. To add to that, the other South Korean player to join the team, Jun Young Park, took his Scapeshift deck and won Grand Prix Minneapolis last week. All in all, this has been an incredible week for the team, and it still stands to possibly get better. All ten members of the team are sticking around in Atlanta to make an appearance at the Grand Prix next weekend.

And it was a team effort all along. As soon as Nam locked up his Top 8, there was a collective cheer from the remaining members of the team. As he won his matches in the Top 8, they all rushed behind the curtain to congratulate him. When he lost in the Finals, they were there to console him. The same was the case for Park's victory in Minneapolis, where the other members of the team could be seen perched above the Feature Match area, craning to get a view of the action. It has been awesome to see the bond that has formed between the members of this team in such a short amount of time.

Plati-Nam's performance in this Pro Tour speaks to their growth as a team and their skill level on the international stage. The team is made up of ten players from five different countries: Tan Gao and Han Bing of China, Wing Chun Yam and Lee Shi Tian of Hong Kong, Kelvin Chew and Chapman Sim of Singapore, Jun Young Park and Nam Sung Wook of South Korea, and Tzu-Ching Kuo and Ryan Young of Chinese Taipei. Each of these groups of players tested in their own internal tournaments, brought the results of each of them together, and then bashed them into one another until they had decided what was best. In the end, this resulted in the main deck of the Junk Constellation deck that the Korean team designed being combined with a new sideboard worked out by the team. This combination yielded fantastic results, catapulting Lee and Han into Platinum status for this upcoming season. 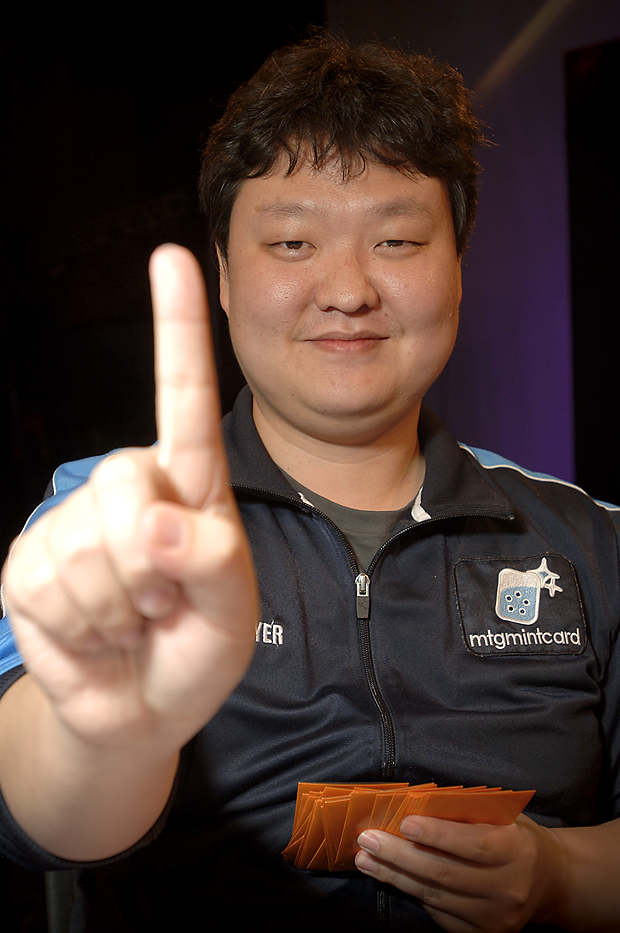 Nam's performance secures him Platinum status for next season, as the points he will get at Pro Tour Magic 2015 will earn him the threshold required.

"We are always on the lookout for new players in our areas," Sim told me. For example, when Han Bing won the Chinese PTQ that qualified him for the tournament, they reached out to him and brought him under the mantle. There's also the Yukuhiro example from Pro Tour Born of the Gods. And the most obvious example is the stellar acquisition of the two Korean stars. This makes back-to-back Pro Tours that this team has taken down, as well as multiple Grand Prix in between. Team MTG Mint Card has really shown their stuff this past year, and clearly looks to be a team to watch in the future. Who knows, the way they're running right now, it wouldn't be a stretch to see a member of the team staring back from a Top 8 profile here at eh upcoming Grand Prix Atlanta. Besides, it would be one hell of a way to cap off a tremendous three-week journey.