Feature: Thoughts on the Top 8 Draft

With a reporter stationed behind each player for the Draft Viewer, they were privy to interesting tidbits (as well as a little second-guessing). Here are the top three impressions for each drafter. 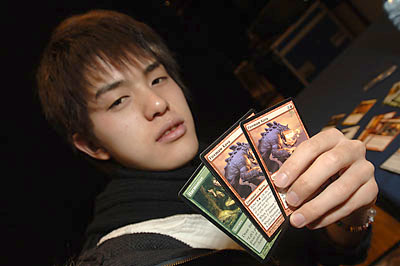 Nice deck. 1. Kenji got first-pick Firemaw Kavu , then picked three black cards when faced with the choice of green or black. He took two red cards after, then got bodily pushed into green with a ninth-pick Nantuko Shaman and tenth-pick Strength in Numbers . The people to his left were fighting over heavy black, so if he had not jumped, his deck would probably have been a disaster.

2. In pack 2, pick 5, he had the impressive choice of Prismatic Lens (fixing for what looked like a three-color deck), Avalanche Riders , Sedge Sliver , and Grapeshot , and took the Grapeshot of all things. He then took another Nantuko Shaman over Phthisis . The other really tough choice came in pack 3 where he nearly put Deadwood Treefolk in his pile, but then stopped his hand and put Dead/Gone in the pile instead.

3. Planar Chaos was very good to him. Wild Pair looked fun but ended up in his sideboard, plus he got Harmonize , Dead // Gone , Utopia Vow , Giant Dustwasp , and Citanul Woodreaders , all the way down at eleventh pick. He did pass a Stingscourger to get his Harmonize though… 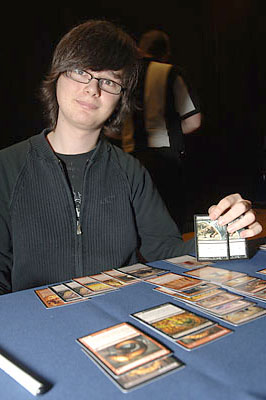 What's the plural of Phthisis? Phthisises? Phthisisi? 1. Marijn opened Dark Withering and Dragon Whelp , which were the most appealing cards for him in the booster. He took the Whelp and was rewarded with a Withering in the pack that got passed to him.
2. He picked up Nightshade Assassin and was passed another Withering… red-black Madness it was. He got an Urborg Syphon-Mage , a Trespasser il-Vec, and two Ridged Kusite s later on to make it happen.

3. He also got some timeshifted goodies in the form of Fiery Temper and Reckless Wurm . 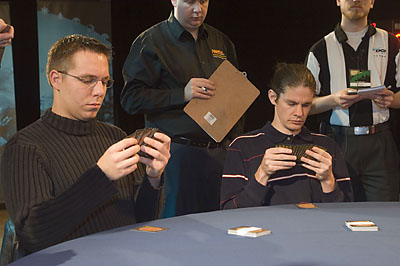 2. Third pack, first pick, Hron was looking at between Mire Boa , Wild Pair , and Rough // Tumble . He seemed to have trouble deciding between the split card and the Boa, and he just shuffled Wild Pair to the back of the pack and never spent any time looking at it at all, not even a pause. Maybe he thought it was something else or just hasn't seen it in play yet?

3. Lastly, third pick, first pack he had a chance at a Phthisis but took a non-black card instead, passing a strong removal spell he could really use, and more importantly possibly sending a signal that may have created another black player on his left, hurting his chances of getting deep black in the second set of packs. 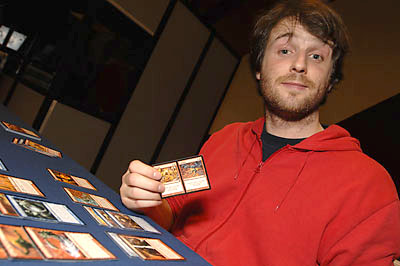 A split decision. 1. Jim was clearly set on going the aggro route that took him into this Top 8. His first pack contained a Fathom Seer , but he shunned the blue card for a head-on dive into the aggressive white deck. The wheels turned visibly in his head when he saw Draining Whelk and more blue in his third pick, and the rare turned him onto the blue-red path. Jim had been a proponent of red-blue as the best archetype in triple Time Spiral draft.

2. Jim was visibly relaxing when pack 2 gave him Hellkite and Sulfurous Blast . The German had a headshaking moment when he happily added sixth-pick Conflagrate to his pile, a card he was not expecting to go so late. All the while, a slew of green cards passed through his hands, and Jim kept touching Thrills of the Hunt and Mire Boa s but stuck to his red-blue path. 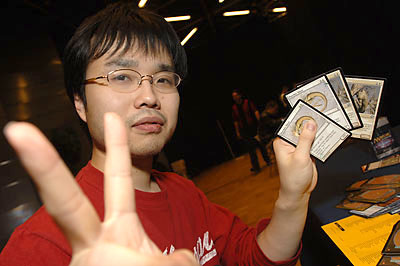 Slivers? Check. 1. Shingo showed strong blue-white preferences from the start (in spite of being fed by Willy Edel, who had been forcing white all weekend), taking second-pick Castle Raptors over Dark Withering and passing more quality black removal early in the first pack.

2. He was very drawn to Slivers, taking Watchers early and very nearly taking Sinew Sliver over Shaper Parasite in pack 3. As it is, he got the Sliver back, proving that both white in general and white Slivers in particular weren't in demand at the table.

3. His deck is a little short on quality tricks, and in general it seemed that Kurihara was being cut on blue. His white creatures are solid though; his big issue might be punching through for the win. 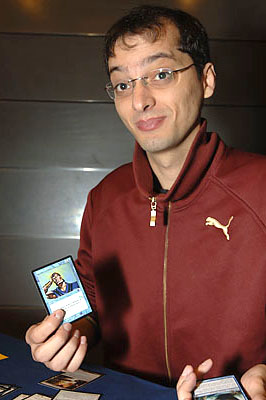 Willy Edel can kill you with his brain… or his Psionic Blast. 1. Having first-picked Amrou Seekers (yes, Seekers) over Teferi in an earlier draft, Edel fiddled with Castle Raptors for quite some time before settling on Psionic Blast . He then accepted fourth-pick Might Sliver , fifth-pick Yavimaya Dryad , and sixth-pick Search for Tomorrow as signals that green was open and set himself up for a humming blue-green deck. He eschewed the Sliver plan entirely, even taking Wormwood Dryad over Venser's Sliver in pack 1. He stayed the course in pack 2, passing a lot of red to the right for two weak early picks but gobbling up double Ravenous Baloth and Phantom Wurm for picks 3, 4, and 5.

2. In pack 3, he was passed two widely debated cards at once, Utopia Vow and Wild Pair . Utopia Vow is hated by some and loved by others, while Wild Pair is undeniably powerful but often unrecognized. He flipped past the Wild Pair and quickly settled on Utopia Vow . Though Edel's deck was indeed in need of the removal, Wild Pair could have been quite strong, stringing Phantom Wurm or Baloth into Baloth (though only from the hand) or any morph into Might Sliver , to say nothing of fun tricks like pumping a late Viscerid Deepwalker in response to the trigger to fine-tune the search. In case you can't tell, this is a card the coverage staff has been rooting for all weekend, so seeing it lap the Top 8 table got us all thinking, appropriately enough, about what might have been.

3. Although he had set himself up well, and Planar Chaos should bring fine treats to the green-blue drafter, only his first two picks, Shaper Parasite and Deadwood Treefolk , were legitimately nuts. The packs offered up a few more mid-range picks before his colors dried up completely around pick 6, leading him to grab double Whitemane Lion . It wasn't immediately clear whether he would splash them, but the flashy little cats could potentially do quite a lot for him, letting him pick up Fathom Seer , Shaper Parasite , a near-spent Phantom Wurm , or the particularly insane Deadwood Treefolk . 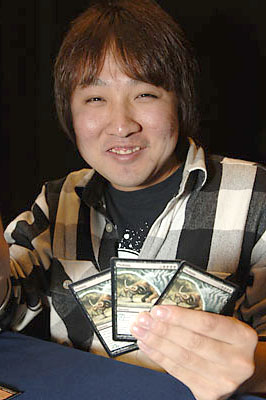 That's… pretty sick. No pun intended. 1. At first I thought this might be a train wreck for Osawa. He first-picked Viscerid Deepwalker (over Crookclaw Transmuter ) from a weak pack in order to force blue. He then got a second-pick Phthisis and took that, moving heavily into black. Unfortunately for him, Marijn Lybaert to his right was moving into black with a succession of Dark Withering s. This didn't seem to affect Osawa as the black was really deep, and he was able to grab a pair of Corpulent Corpse .

2. The second booster was absurd. Osawa opened Errant Ephemeron and was passed another one fourth pick. How does Ephemeron go fourth pick? But even crazier, he got two more Phthisis . That's right, three Phthisis . It's even weirder when you consider Lybaert to his right also has two Phthisis . You've got to pity the green mage for this one. I foresee a lot of Baloths doming their owners for ten.

3. Planar Chaos was fairly quiet, as you'd expect for the black mage. He got a Shaper Parasite first pick, and then it quieted down. Osawa's deck seems like it could be pretty good. He's got good suspend guys for the early game and multiple Phthisis to fireball his opponent out in the late game. 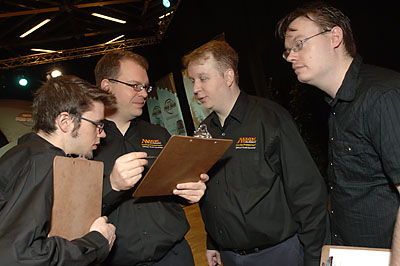 The coverage staff excitedly compare notes on how the draft shaped up. 1. First pick of the draft, the two most powerful cards were Temporal Isolation and Draining Whelk . Tormos went with the Temporal Isolation , which on its own doesn't necessarily indicate anything. However, on his next pick, with Spiketail Drakeling , Nantuko Shaman , Phthisis , Prodigal Sorcerer , and Greater Gardadon to choose from, Thomas instead opted for Benalish Cavalry . The Cavalry is a fine card, but not at the power level of some of the other cards in that list. The combination of both picks indicated that Tormos had very likely decided he was going to force white coming into the draft, particularly given what he had to pass in the second pack to take the Cavalry.

2. The white force worked out quite well in terms of depth. In fact, Tormos ended up with so much white that it wasn't clear what his second color was, even going into the third set of packs. Sporting a great set of creatures but running a bit light in the removal and tricks department, the deck found Shaper Parasite and Erratic Mutation in the second and third picks of Planar Chaos to cement its second color in blue, providing exactly what Tormos had been looking for.

3. With the benefit of hindsight, Tormos's second-pick Benalish Cavalry becomes even more interesting. To his left, Hron took Strangling Soot over Phantom Seer, so the player to Hron's left was already going to end up in blue. By passing the Phthisis , Prodigal Sorcerer , and Draining Whelk , Tormos made it that much more likely that the players to his left would end up in color combinations involving everything but white. The sacrifice is not getting much blue back in the second set of packs, but the payoff is the lion's share of the white Tormos was already working so hard to claim. Given how the packs and picks broke, Tormos was in the perfect chair for the strategy he went after.