ver three days of competition, an initial 195 teams has been whittled down to just four: two from Japan and two from the U.S.

Initially I thought Two-Headed Giant Draft was all about trying to assemble the best "Sealed Deck" by simply taking the best two cards, but as you have to go a looong way down the standings to find my finish (you might want to start from the bottom), I think we can safely say I was probably mistaken.

I took the corner between Lachmann / Van Lunen and Fiorillo / Harvey. This is actually a nice contrast in drafting philosophies for this format. Chris Lachmann and Jacob Van Lunen are "the Sliver guys." Throughout the weekend they've been taking the fun-loving, ability-sharing, entrails-ripping slithery alien dudes and wrecking people with them. They even managed a turn-three poison counter win in one of their games thanks to Virulent Sliver. 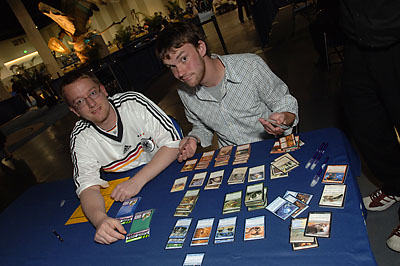 For their first picks they take the same removal spells everyone else is fighting for, but after then they go for Slivers as their creatures. A 3/3 for five mana with, say, vigilance or first strike isn't too exciting for most players, so they tend to leave them in the pack. However in the decks Lachmann and Van Lunen are drafting, that 3/3 is often a 4/4 with haste, first strike, reach, and vigilance! This means they are getting quality picks (for their decks) later than normal.

Eugene Harvey and John Fiorillo have also been pushing a different strategy to other teams. Going first has been a popular strategy, but Fiorillo and Harvey have been preferring to draw. Their plan is to try and grind their opponent out with card advantage from two-for-ones and eventually wear them down.

When you're forcing Slivers an opening booster containing Telekinetic Sliver is just the boost you need. Lachmann and Van Lunen were fortunate enough to open the Telekinetic Sliver and also have the aggressive Bonesplitter Sliver to go with it. Christmas arrived early as they were passed an Essence Sliver. Orcish Cannonade fulfilled the removal quota while Shadow Sliver and Two-Headed Sliver added evasion to the Sliver abilities.

Sitting next to them Fiorillo and Harvey opened Errant Ephemeron and Strangling Soot and happily snaffled the two best commons from Time Spiral (in normal play anyway). The blue-black theme continued as they second picked the 2HG-empowered Urborg Syphon-Mage with a Snapback. They followed it with Castle Raptors and Riftwing Cloudskate.

In the second booster, Fiorillo and Harvey opened a photogenic Jaya Ballard, Task Mage and took her along with a chunky Sporesower Thallid. Meanwhile Lachmann and Van Lunen opened with a more traditional Grapeshot and Strangling Soot, but then followed with the decidedly non-traditional Shadow Sliver and Two-Headed Sliver.

Because Lachmann and Van Lunen have such a heavy preference for Slivers, the knock-on is that those downstream get some nice goodies as well. In this case a Nightshade Assassin and Assassinate. Lachmann and Van Lunen added more evasion to the Sliver army with two more Two-Headed Sliver and another Shadow Sliver.

Onto the Planar Chaos boosters.

While Lachmann and Van Lunen have been aggressively taking Slivers, it's been controlled aggression. A lot of the times they've been content to take the good cards and wheel the Slivers when they come back. For the first two picks from Planar Chaos they took Sunlance, StingScourger, StingScourger and Mana Tithe. There were Spitting Slivers in the pack, but they just waited for them to come back.

The next Planar Chaos Booster was a little more interesting as Poultice and Sinew Sliver are both quality Slivers. Lachmann and Van Lunen took Poultice Sliver first pick, but left the second one in favour of a Dead // Gone and Sinew Sliver when they were passed the next pack.

This was really good for Fiorillo and Harvey as it meant they got a Dragon-Oros, the Avenger-third pick. From Planar Chaos the other U.S. team had been continuing their card advantage theme. Their first booster coughed up Ana Battlemage (the discard kicker is fairly brutal in 2HG) and Dismal Failure and they followed with Boom // Bust and the versatile Evolution Charm. More card advantage followed in the next booster with the sort-of Wrath of God: Rough // Tumble.

After four boosters Lachmann and Van Lunen were sitting on a nice collection of Slivers and removal while Fiorillo and Harvey were shaping up with solid black-red and blue-green decks. 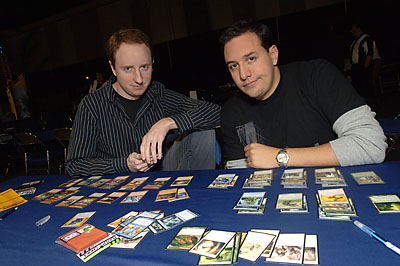 On to Future Sight. Appropriately for Lachmann and Van Lunen, the "Sliversmiths" actually opened a bona fide Sliversmith. They took this and a Ghostfire over a Virulent Sliver, banking on the 1/1 Sliver to wheel. They were a little miffed when it didn't, but after being poisoned to death earlier in the tournament, Fiorillo and Harvey weren't letting that guy through for free!

It wasn't too bad for Lachmann and Van Lunen though; they were passed a Virulent Sliver and then got two out the sixth pack. They took one of them first-pick over the normally bombalicious Nacatl War-Pride. I guess the little poison Sliver gets much much better when you've already got Two-Headed Sliver and Shadow Sliver in multiples to make blocking hard.

Lachmann and Van Lunen also snaffled a couple of Homing Slivers to hunt down the bomb Slivers with slivercycling if they needed to.

In the Future Sight packs Harvey and Fiorillo got to continue the mass destruction theme with two Festering March although by effectively ditching white they missed out on a bomb in the last pack as they had to ship Angel of Salvation.

This left them with solid black-red and blue-green decks.