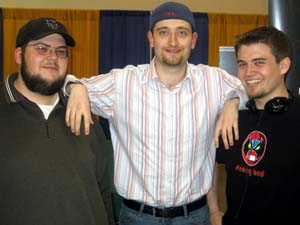 When Mike Flores' weekly Star City Games column went live last Friday, readers were greeted by teaser text Jon Finkel's team playtesting at Neutral Ground for this event. Mike went on to point out that we have all seen what Jon is capable of at a Limited event without the benefit of any practice. Jon has recently made the Top 8 of two separate Limited Pro Tours and US Nationals without any significant advance work. Should his appearance in the Final Four come as any kind of surprise?

Brian Kibler is a frequent visitor to the elimination rounds of Grand Prix events and this marks his sixth such visit. He made the Top 8 of GP Kansas City earlier this year and won Grand Prix Boston the season before that. He is currently the editor for the Premium side of the Brainburst.

Eric Froehlich is a popular contributor to the site Brian edits and no slouch himself. Despite a recent slump he still has an impressive resume with multiple Grand Prix Top 8 appearances and a Top 8 at Pro Tour San Diego.

Re-Elect Gore's strategy has been to put white on the left, black in the middle and green on the right in their drafts to this point on the weekend. 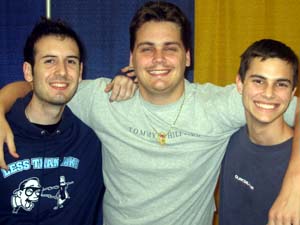 Thaaaat's Me quietly moved pass other more well-known teams to draw into the Top 4 with Re-Elect Gore. They may not have the marquee value of the other teams in the elimination bracket but they were not lacking in experience.

This was Chris Fennell's first appearance in the elimination portion of a premiere event but he was in the running at Pro Tour Amsterdam throughout the weekend. Chris was confident that this would not be the last time he is profiled in this fashion. Qualified for San Diego on rating, the Gainesville, Florida native expects to make a habit of seeing his name up in lights.

Charles Gindy was a member of Team Prodigy when they made the finals against Mike Long's team at Grand Prix Pittsburgh last year. Gindy surprised everyone last year with his poise and confidence. He called the whole draft for his team and was relieved to have his new team not be relying on him to fill that role again.

Bill Stead is the most well-known of the trio. He won Grand Prix New Orleans in 2001 and over the past year has three Top 16 finishes at Limited Pro Tours. Bill credited the success of this team to the proximity all three players live within. He feels it is more important to play with people that are local to you than to try and build the "best" team. Synergy is crucial in his eyes--that and the ability to easily playtest.

Their strategy has been to put green-white in the C-seat and then flip-flop between blue-black affinity and red-black agro in the other two seats. The idea is to get their agro deck to face-off with the other team's affinity. Their strategy is remarkably similar to the one employed by Shenanigans and it should be interesting if they face each other in the finals. 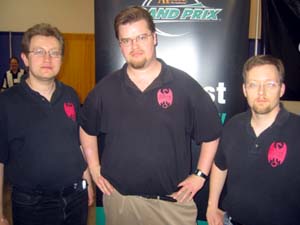 When Alex, Justin Gary, and Zvi first appeared on the Magic scene as Illuminati it was literally out of nowhere. The team had played throughout the first two days of the tournament under some bland name. It was suggested that they change it since they would be getting more attention on Day Three and there was no shortage of amusement among the gaming crowd when The Illuminati suddenly appeared at the Top of the standings after two days of play.

When Alex's current team went on an 8-o run yesterday they were playing as Your Move Games. You cannot duplicate he name of a professional team and they were asked to change it. Suddenly the Illuminati reared its head again.

All three members of this team have experienced success in both individual and team events in almost every arena. Both Rob Dougherty and Darwin Kastle had fallen off the Pro Tour although it is unclear whether or not they would be taking the slot to play under this configuration in Seattle.

They claim not to have a set strategy, preferring to draft their decks in reaction to their opponents. 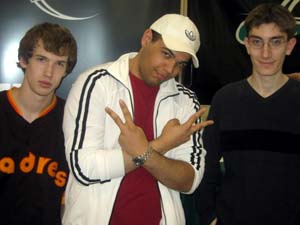 Osyp Lebedowicz may be the spiritual leader of this team but Patrick Sullivan owns the store that has been made famous by their success. The Only Game in Town in Sommerville, New Jersey is what many of the finest Magic players on the East Coast consider their Magic home.

Osyp cemented the store's reputation by winning Pro Tour Venice last year. Patrick continually seems on the verge of having a breakthrough tournament to follow up his Top 8 from Grand Prix Philadelphia. He is engaged to Grand Prix Columbus Top 8 competitor Kate Stavola. Adam Horvath has some blank space on his resume but is looking to begin remedying that beginning this weekend.

Their strategy mirrors that of Thaaat's Me and when they played earlier today they had three mirror matches. They were facing YMG in the first round of elimination.