Well over a hundred players are here for the 2008 Vintage Championship. Many big names are in the house including last year's champion and runner-up Steve Menendian and Rich Shay. The question on everyone's mind is how significant an impact the recent restrictions in the format will have. Will an old favorite wind up taking the top slot? Or are there some new deck lists lurking out there for their chance at the limelight? Those answers and more, plus the special top prize Mox Ruby will be found here on Magicthegathering.com. 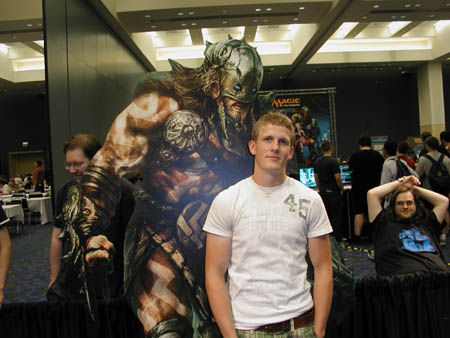 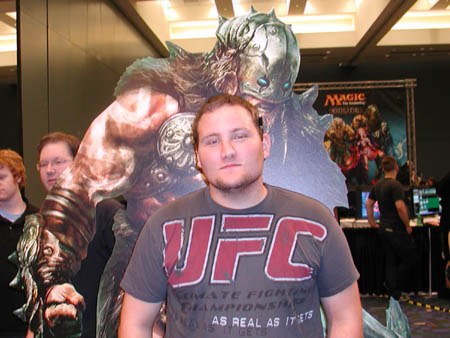 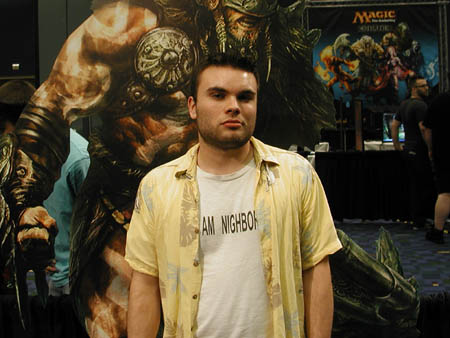 Previous Tournament Finishes: I win nothing.

4 Chalice of the Void 4 Serum Powder

4 Leyline of the Void 4 Bridge from Below 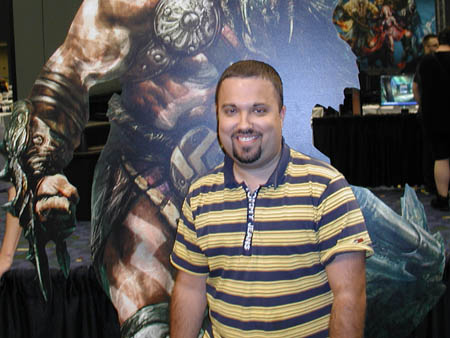 1 Wipe Away 4 Thirst for Knowledge 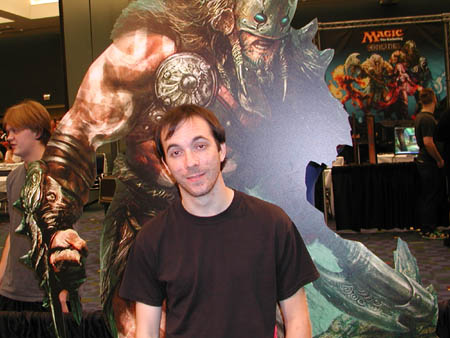 1 Fact or Fiction 1 Sower of Temptation 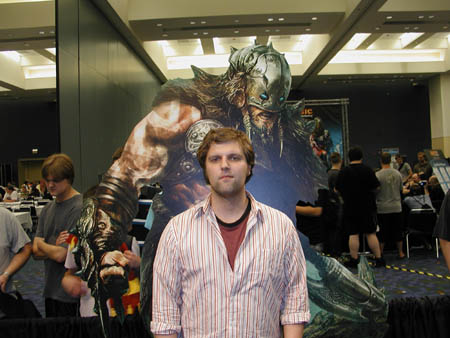 1 Fact or Fiction 2 Sower of Temptation 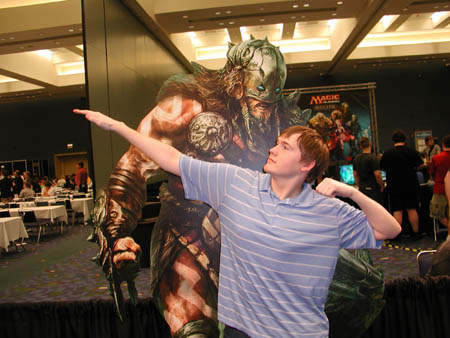 1 Yawgmoth's Will 1 Demonic Tutor 1 Leyline of the Void 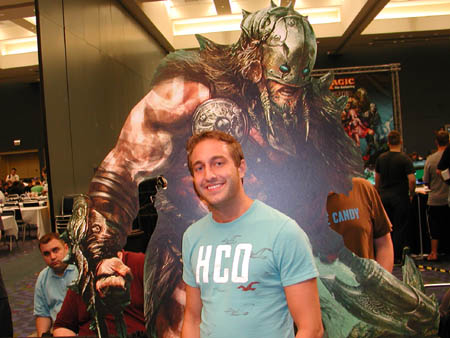 Here in the Quarterfinals of the 2008 Vintage Championship, Jason Aken and his Oath deck squared off against Brian Demars in a long two games. During the first Jason's land kill in the form of Wasteland and Strip Mine wasn't enough to contain his opponent. Demars overcame it all on the backs of fast artifact mana and a Yawgmoth's Will that saw a bevy of powerful cards like Ancestral Recall return to the field of play. In the second Jason tried to disrupt his opponent with an early Chalice of the Void set on one, but Brian didn't seem to bother as he moved to repeat his Game 1 plan by powering up an overwhelming Yawgmoth's Will for Black Lotus, Demonic Tutor, Tinker, and more, winning 2-0.

Paul Mastriano had his hands full with Owen Turtenwald, but managed to pull ahead with his Pitch/Grim Long deck. In the first he had an early Tinker for Darksteel Colossus as Owen watched in vain, failing to draw a Grindstone to go with his Painter's Servant. Turtenwald found the combo in the second, but was confounded by his opponent's Necropotence, which prevented Mastriano from ever having a draw step. Owen wisely opted to turn his own Ancestral Recall on his opponent after Grinding Mastriano's deck to nothingness. Still, it wasn't meant to be for Turtenwald as Paul came back in the third game to find his opponent short the Grindstone portion of his combo long enough for a second Darksteel Colossus fetched by Tinker to do its dirty work. Mastriano wins 2-1. 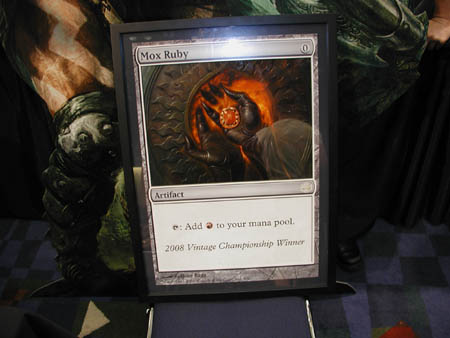 The prize!Tight Tommy Kolowith had an easy time with Mike Solymossy, though the latter had played well on the weekend. In the first a Tinker for Colossus from Mike gave Tommy the window to resolve a Yawgmoth's Bargain and combo off with his Grim Long build. The final game in the match was a total blowout as Mike's Thoughtseize was Misdirectioned, wrecking his hand, and Tommy played every single card from his hand on the first turn leading to a Necropotence. The skull fueled him with enough gas to finish off Mike soon after 2-0.

The fourth match of the Quarterfinals saw Jimmy McCarthy and his Control Slaver deck square off against Chris Nighbor's Dredge build. The first game was a back and forth affair with both players finding the marquee parts of their engines early on, McCarthy in the form of Goblin Welder and Nighbor in the form of Bazaar of Baghdad. Eventually McCarthy managed to squeak things out in a game that went down to the wire, bringing it home on the back of his recursion engine thanks to Welder. The final game of the match was a heartbreaker for Nighbor, who mulliganed to just four cards in hand, using two Serum Powders to do so. Finding a hand he liked, he was dismayed to see his opponent open on double Tormod's Crypt and Triskelavus to start the beatdown and the match went to Jimmy McCarthy 2-0.

The first semifinals match featured Brian Demars against Paul Mastriano. In the first game Paul allowed a Tinker to resolve from Demars, who searched up Darksteel Colossus. The powerful spell was actually only a ploy to resolve Yawgmoth's Will, but Demars was shocked to find his opponent had masterfully seen through the bluff and had two copies of Force of Will to stop the black sorcery from resolving, taking it home a short while later. In the second game Brian opened on a first turn Sphere of Resistance and Tormod's Crypt but Paul wasn't even fazed. When his Duress nabbed Demars' Yawgmoth's Will he left his opponent out of gas and a Tinker for Colossus followed by a Hymn to Tourach sent Paul Mastriano to the finals by a score of 2-0.

On stage two Jimmy McCarthy and Tommy Kolowith went head to head. In the first game Tommy's Ancestral Recall met a Misdirection that allowed Jimmy to draw three cards. That let Jimmy find a Tinker to hit Sundering Titan that, combined with a Strip Mine, ate up Tommy's lands. The 7/10 was able to take it home. The second game was a back and forth affair, but eventually Tommy went for a Timetwister to try to go off against his opponent. Jimmy let it resolve, but wound up coming out on top with a new hand of seven as he Tinkered for Titan and had double Force of Will backup to stop Tommy in his tracks. Jimmy McCarthy moved onwards to the finals 2-0.

Vintage Finals: The Last Will of the Day

"I remember the last time I played you I lost to you in the Top 8," said Paul Mastriano.

His opponent responded quickly, "Hey, the last time I played Tommy Kolowith I lost to him." McCarthy had just beaten Kolowith in the Semifinals. 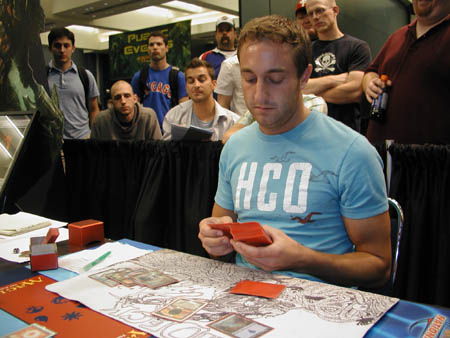 Paul Mastriano searches for the win.McCarthy won the die roll and worked the crowd, asking an onlooker, "Who are you cheering for, your teammate [indicating Mastriano] or awesome me?" The crowd teased McCarthy back, loudly indicating that they favored Paul. Jimmy took a mulligan but kept a six-card hand of Tormod's Crypt, Sol Ring, Volcanic Island, Sundering Titan, Thirst for Knowledge, and Flooded Strand. Across the table Mastriano kept seven featuring Brainstorm, two copies of Force of Will, Mox Jet, Island, Polluted Delta, and a Mana Vault.

Both players built their mana with a combination of dual lands and artifacts, but Mastriano drew first blood by Duressing his opponent's Thirst for Knowledge. A second Duress from Mastriano ensured the coast was clear, and he Tinkered up a Darksteel Colossus.

Jimmy McCarthy tried to claw his way into some standing in the game but a few sac lands didn't look like they were going to do it for him. A bit of a mana flood enabled him to hardcast a Sundering Titan, but Mastriano revealed a Force of Will and blue card from his hand, and Jimmy laughingly conceded. 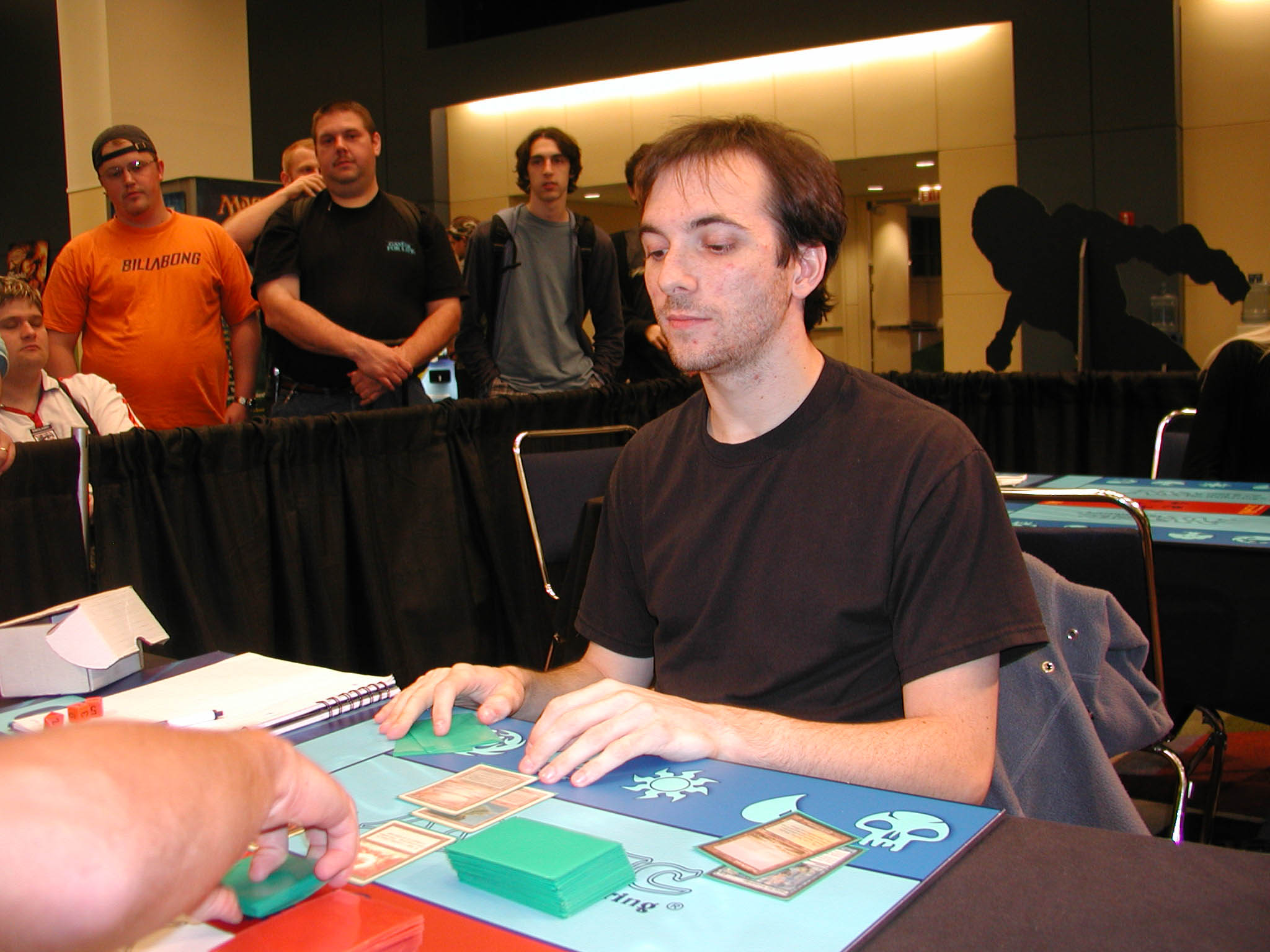 Jimmy McCarthy plays with care.McCarthy came out of the gates in the second game, playing an Island, Mox Emerald, and Sphere of Resistance on his first turn. That left two Flooded Strands, a Wasteland, and a Brainstorm in his hand. Paul was holding Cabal Ritual, Dark Ritual, Mox Sapphire, two copies of Polluted Delta, Underground Sea, and Brainstorm. Sphere was going to cause him some problems, but it wasn't completely unmanageable.

The players spent their turns building up mana. Thanks to Sphere of Resistance, their Moxen now cost them a slightly fairer price of one mana instead of none, slowing the pace of the game. Mastriano eventually managed a Duress that nabbed a Misdirection from his opponent and cleared the way for Paul to resolve a Time Walk. With the extra turn he made a second Duress to nab a Thirst for Knowledge, though a second copy remained in his opponent's hand. When McCarthy attempted to play it at the end of the extra turn, Mastriano responded with Gifts Ungiven.

McCarthy had a tough set of four cards to choose for giving to his opponent. Necropotence, Phyrexian Negator, Ancestral Recall, and Demonic Tutor; all were bad news. After a long consideration, Negator and Ancestral headed to Mastriano's hand, and McCarthy's Thirst for Knowledge finally resolved. It didn't look like it provided much help, as McCarthy played a meager Gorilla Shaman for his turn before passing.

Mastriano on the other hand managed to successfully resolve both his Ancestral Recall and his Negator when he had the turn back. His opponent's Demonic Tutor drew a raised eyebrow, possibly causing concern for Paul that his opponent might somehow find a way to crawl back into the match hiding inside his deck. That didn't look to be the case, however, as Paul Hurkyl's Recalled his opponent's artifacts then cast Mystical Tutor for Yawgmoth's Will. With no mana up, things didn't look good for McCarthy.

Mastriano played Yawgmoth's Will hesitantly, expecting a Force of Will or counter of some type. McCarthy simply shrugged.

"I'll let you play it out," he said, good naturedly but slightly dejectedly. "It'll be the last Will of the day." Paul started doing some math, and a short time later the crowd erupted in cheers as Paul Mastriano sent a lethal-sized Tendrils of Agony towards Jimmy McCarthy's head. 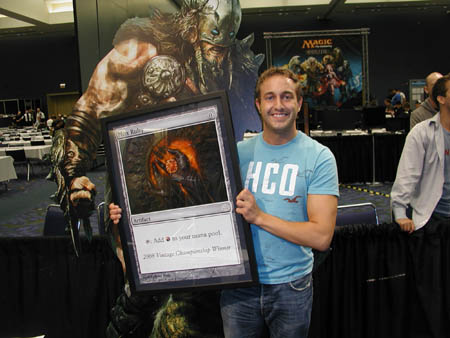