Feature: We Were the Champions

t the end of this coming Sunday, a new player will be able to wear the moniker, "Best Player in American Magic." OF those players in the event, only four have previously held the title. Eugene Harvey won in 2002, Craig Krempels won in 2004, Antonino DeRosa won in 2005, and Paul Cheon is the current US champ. There has long been a stigma that goes along with being the US champion. The game was created in the US, and for the better part of its life, the best players in the world were, in majority, American. 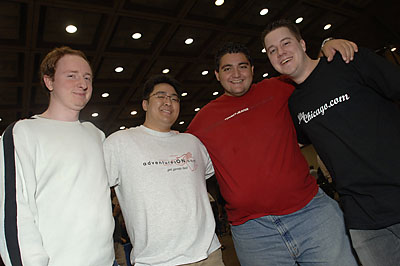 The world is changing, though. Gone are the days when you pump your fist in celebration when sitting across from an Asian player. No longer can Americans claim to dominate the world of Magic. The world has caught up to us.

I had a chance to sit with the previous National champions for a little chat about Nats and the prestige of being crowned a champion.

All the players agree that it's harder to win a Pro Tour than win the National tournament. There are a few factors that feed into that. "There are more qualifications now, and that's a good thing," Antonino pointed out. "But when you raise the number of players, you lower the average skill level." Ant also believes that the average American is getting worse at the game. "We're just not as good as we used to be. That and the rest of the world is getting so much better." That didn't always used to be so.

Antonino remembers a time when winning US Nats meant everything. "You want to win at the highest level of competition, and for a while that meant the US Champs. Now that the world has improved, though, the higher level of competition is at the Pro Tour level. Now winning a Pro Tour is more important." That being said, Antonino did admit that when he won he felt it was his crowning accomplishment.

Craig Krempels, the 2004 National Champion, expressed a similar, yet different opinion. "I had been playing for a while, but I hadn't won anything yet. To be honest, I just wanted to win anything. I didn't care what it was. I just wanted a W."

Not all of the players had the same amount of experience as Craig when playing in their first Nationals. Craig had been fortunate enough to have enough Pro Points to qualify for Nationals. Antonino and Paul Cheon were forced to qualify through their respective regional tournaments. In fact, last year, the year he won, was Paul's first Nationals ever. Proof again that anyone has a chance to win Nationals and prove that they deserve to be crowned the champion.

Paul came out of nowhere to become the new "future of American Magic," and he hasn't let his supporters down. He has put up some seriously strong numbers throughout this last year, and is one of the heavy favorites to win the tournament again this year. In fact, when I asked Antonino and Craig their fantasy Nationals teams, they each featured our current US champion. "He's definitely one of the best," Ant admitted. Rounding out Ant's fab four were Mark Herberholz, Osyp Lebedowicz, and Ben Rubin. "If I was going to send four people to represent our country at Worlds, if I really wanted us to win, I would send these guys. They are the best." Krempels came up with a similar squad. "I would want to play with Ant, Cheon, and Heezy. I figure that way, at least the first two guys will put in some serious testing," he joked. Mark Herberholz is the only player other than Cheon to make all the players' lists, further emphasizing how good he is. These guys have been to the big stage and knows what it takes to win, and they know that both Paul and Mark have what it takes to get it done.

While their faith in Cheon and the new generation of American Magic players is strong, all of the former champs admit that the world is putting up stiffer competition every year. If the Americans want to reclaim the dominance they once were accustomed to, they will have to work hard and prepare. This is Magic's version of the Olympics. When you get the call to go, show some pride and represent your country to the best of your ability. And it that textbook call to duty doesn't stir your blood, remember-the team tournament at Worlds pays pretty well, too.