Feature: What's Up with W/U Heroic?

hen we got hold of our first W/U Heroic deck on Friday, Zac Hill began to effuse over how "gas" and "DI" the deck looked on paper.

"I honestly don't see how this deck loses to anything ever," he said without a hint of hyperbole.

On paper, he's on to something. Favored Hoplite, Phalanx Leader, and Battlewise Hoplite make up the low end of a curve that tops out at Eidolon of Countless Battles and Brimaz, King of Oreskos. Every creature in the deck is made that much more threatening by cards like Ordeal of Thassa and the various Eidolons. One of the hurdles decks like this face is the prevalence of Courser of Kruphix and Sylvan Caryatid, but this deck just uses Stratus Walk and Aqueous Form to ignore them. It has Gods Willing and Ajani's Presence to protect creatures from targeted removal. All of the scry triggers in the deck make it easy to avoid flooding out in longer games and keep the deck stocked full of threats. It seems like it has every advantage needed to be one of the best decks in Theros Block Constructed.

And yet it isn't.

Yesterday's Block Constructed rounds saw only four players make it to 4-1 or better records with the deck, with most of the players ending up 2-3 or worse. The deck was one of the top five most-played decks of the tournament, but ended up winning only barely more than 40% of the matches played. It was the worst-performing of the big decks in the field, taking us and the players who piloted the deck by surprise.

What happened to make a deck that looks as good as this on paper turn into one of the weakest-performers of the Pro Tour? About the middle of the Block Constructed rounds yesterday, I caught up with Josh Utter-Leyton to talk about what makes Block Constructed tick. He was of the opinion that W/U Heroic was the best aggressive deck that the format had to offer. After two full days of play, though, he wasn't too surprised that the deck fell flat.

"So many of the decks in the field came prepared to deal with aggressive decks," he told me. "Cards like Hero's Downfall, Bile Blight, and Silence the Believers are absolutely everywhere. Even the red decks are running Lightning Strike, Chained to the Rocks, and Magma Jet. Decks like Heroic are just too susceptible to being disrupted by decks with those cards."

Still, one player managed to have a perfect day on Day One with the deck, and he doesn't think the deck is as bad as the overall results might indicate. Jared Boettcher, the current Rookie of the Year leader, played the deck to a perfect 5-0 record on Day One and had picked up yet another win by the time I talked to him on Day Two. When I asked him about how he thought he was able to do so well with the deck where others were floundering, he had a few theories. 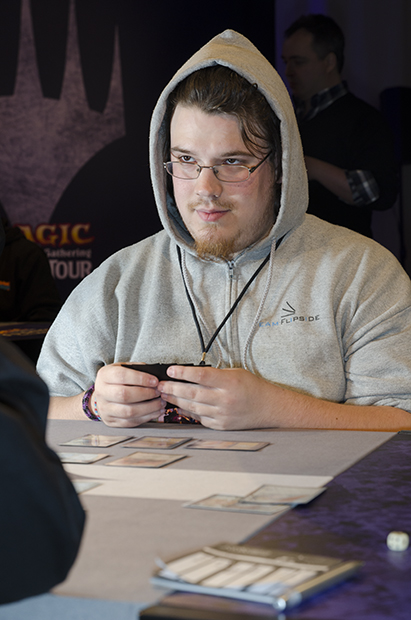 Jared Boettcher, current rookie of the year, was the only person to battle through Day One's Block Constructed rounds undefeated with W/U Heroic, a deck that looks great on paper but has fallen flat here at the Pro Tour.

"First of all, you have to be very careful about how you use your spells," he cautioned. "There are appropriate times to just load up on one guy, and other times when you need to pace yourself and try to play a more grindy game. Knowing which is which is probably the hardest part of playing the deck. There are a lot of threats in this deck, and most of the removal is just a one-for-one. That will let you just grind away at an opponent's hand until they don't have anything left before you pile on the damage."

"One of the biggest advantages I think I had was the Ajani's Presences I had in my main deck. With all of the black decks running around, Presence adds two more ways that my creatures can survive Hero's Downfall. They already tend to be big enough to get above Bile Blight and Drown in Sorrow, so having Gods Willing and Presence to protect them from Downfall has been great. I'm also playing Brimaz, King of Oreskos, over Fabled Hero, which many of the other decks are playing. The black and red decks have any number of ways to kill Fable Hero if they can catch him early, but most of their removal spells just don't kill Brimaz. In addition, you often find yourself needing to go around blockers rather than try to go through them, and Brimaz gives you a way to do that."