Feature: Who is Arnost Zidek?

Zidek of the Czech Republic started the day at the bottom of the list of players, but that's only because it was sorted alphabetically. One of only three undefeated players coming into Day Two, he went on to 3-0 his third table as well, putting him at a commanding 27 points of 27 points possible after Round 9. The thing is, nobody seems to know who this guys is. So, after the fourth draft, I pulled him aside for a few minutes to find out for myself. 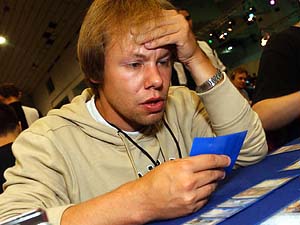 Zidek powered his way to an undefeated start into Saturday.

First off, this isn't his first Pro Tour appearance. He qualified for the World Championships in 2002 through Czech Nationals. Though he didn't make money on his first shot at the tour, he certainly wasn't done. Zidek can claim the impressive feat of having finished in the Top 8 at Grand Prix Paris in '04, the event that broke the record for largest GP ever, with a staggering 1,592 players! Also a Kamigawa Block draft event, this one was back when Champions was new.

That performance got Zidek an invite to Pro Tour-Nagoya, where he finished 44th. Coming into this event, he says he's been doing at least five drafts a day since the beta started for Saviors on Magic Online. Between that and the other practice he's put in, Zidek estimates that taken part in well over a hundred drafts in preparation for this event.

When I asked what he learned from all that practice he laughed, saying that aside from learning the individual cards, he noticed a very strong pattern in which decks were winning for him.

"I just want blue," he said. "Every time I draft blue I seem to make the finals or win the whole thing. Blue-red, blue-black, blue-white, blue-green, and then if there's no choice red-black, all those combinations had positive records for me after 100 drafts. After that, none of the other combinations had a winning record overall. Maybe I just don't know how to draft the other colors right, but for me there was a huge difference when playing blue. It just works with any color combination."

When I asked how Draft 4 had gone, he said the toughest pick had been the very first. His opening pack had contained Hanabi Blast, Ronin Houndmaster, and another strong red card that he couldn't remember. 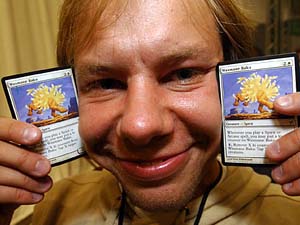 Zidek was pleased with his double Waxmanes.

"I hated thinking about passing Hanabi Blast, but there was no way I wanted to take a red card and then pass two more strong red cards left, so I took Mystic Restraints instead, as it was the only reasonable blue card. I think the decision was a good one, as I was able to cut off my colors [blue-white] from those on my left, and got rewarded with many good cards in Betrayers, including double Waxmane Baku."

When I asked about his chances, he said he liked his deck and he figured he only needed a couple more wins to lock up a spot on Sunday. His main concern was having to face the monster of a red deck he'd created on his left.

"I think I made the right decision, passing the Hanabi Blast, but I definitely helped create a very strong red deck to my left. I passed a lot of good red cards that direction while setting up my own deck. Hopefully I won't have to face it!"

Zidek just put away his first match of the draft, going to 10-0 over Craig Edwards and his triple Shinen of Life's Roar deck. The way he's going, and if he's right that he only needs one more win, he may very well lock the whole thing up before even having to play against that red deck. Either way, at 10-0, it's hard to imagine we won't be seeing more of this player Sunday, and you can bet he'll be looking to play Islands.