Feature: Win a Trip to Paris in the WPN Championships? D’accord!

Who fancies a trip to Paris, France for Magic Weekend, including both a Pro Tour and a Grand Prix, flights and hotel included? A hotel room in Paris you say? The weekend of Valentine's day? That sounds none too shabby to me, and there were plenty of players this weekend that agreed, signing up to the Wizards Play Network Championship to try to win just that.

After the Swiss rounds, Mythic Conscription looked to be the deck to beat, with five of the Top 8 playing variations on the powerful Bant theme. The other three lists included the Soul Sisters deck that caused waves at U.S. Nationals, a Naya Shaman deck, and finally a powerful white-green Eldrazi list. That's a lot of annihilator in the Top 8 all told.

While the big Eldrazi deck managed some impressive starts, including getting both Kozilek and Ulamog on the battlefield at the same time (and missing out on following up with Emrakul due to an opposing concession), it couldn't get past the conscripted forms of Eldrazi. The Soul Sisters deck got up to over 40 life, but then saw that life knocked down in sizeable chunks again, stopping it advancing beyond the quarter finals.

The finals was a Mythic Conscription mirror match where Tomas Vanek of the Czech Republic prevailed over Matthijs Nijboer to win himself a nice little trip. Nijboer didn't do too badly for himself either, winning an uncut foil rare sheet from M11, along with a whole mess of boosters.

The Wizards Play Network is a program that supports play at all levels around the world, from your local store all the way to up to things like the WPN Championship here at the Pro Tour. It worked for Tomas Vanek—it could work for you too. 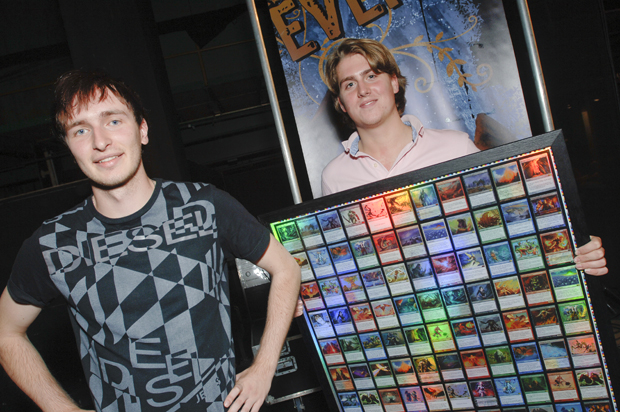 Matthijs Nijboer, right, is heading home with an uncut foil rare sheet, and winner Tomas Vanek is headed to Magic Weekend in Paris!