The 2007 Switzerland National team features a bevy of names which those who pay attention to the tournament circuit will recognize. All four players have seen Top 8 action on the Grand Prix level with Manuel Bucher leading the way with two and Christoph Huber, Nico Bohny, and Rafael Gennari each making the final elimination rounds once in their careers. Prior to the 2007 World Championships, only Raphael Gennari had seen Pro Tour Top 8 action after reaching the final rounds in 2001's Pro Tour¬–New Orleans. This weekend Christoph Huber joined him with that distinction after piloting his way through 16 rounds of Worlds individual competition to earn a slot at the final table. 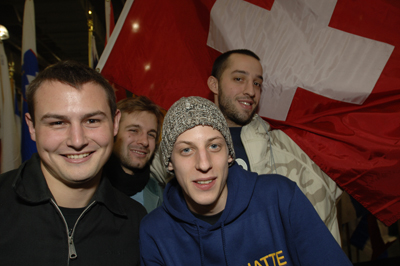 The team also seemed to congeal well playing Two-Headed Giant as they smashed through the field to the tune of a 4-1-1 record. Their only non-wins? They came by the hand of the Austrian team who will naturally square off against them at the table on Sunday. So how much preparation did the Swiss do for the event?

"We did two drafts the day before Worlds," explained Christoph. When asked who they drafted with, Huber hesitated but when his friends just laughed he sheepishly confessed "Well, we each represented a single Giant while drafting."

The last time we saw such high-level Two-Headed Giant play was at Pro Tour–San Diego where Jacob Van Lunen and Chris Lachmann, the Pro Tour champions, had used a Slivers strategy going into each draft to take the crown. Had the Swiss players targeted any specific archetype going into the draft?

"At the beginning [of a draft] it's just picking the best card," said Gennari. Bohny added "We just waited to see what came around."

Christoph didn't quite agree: "I always try to draft beatdown. My first two decks had curves that stopped at three mana."

That didn't mean there weren't cards they valued higher than in regular Lorwyn draft. Specifically they mentioned Dreamspoiler Witches, Elvish Handservant, and Kithkin Daggerdare as creatures they draft higher than they would normally though Manuel Bucher excitedly jumped in with "Cloudthresher!", obviously still hyper from his match win against the Dutch in the final round in which he used the 7/7 to deal the last four damage to his opponents.

The four players, each having nearly a decade of experience with the game under their belts, said they were excited about teaming together. No specific combination had worked better than another, which indicated they gelled well together as teammates in general.

"Every team worked," Huber concluded. Did that come from playing together at home? "We playtest sometimes with each other." Bohny explained, though for this event they hadn't done as much work in conjunction with one another. Raphael pointed out that his teammates lived on the German side of Switzerland, unlike him. "I mostly tested on Magic Online."

Will the Swiss team be able to overcome their early troubles with the Austrian team in time to take home the championship?

While the Swiss rode high at the top of the standings all day at the Worlds Teams competition, it has been a slightly rockier road for the Austrians, who had to fight in what was a very close race for the other place in the finals. 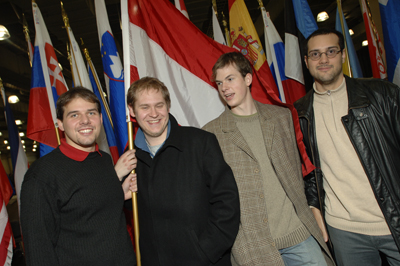 It is a team well equipped to do it. The Austrian National Champion, Thomas Preyer, got his taste of a Pro Tour Top 8 when he finished 2nd at Pro Tour–London in 1999. Throw in three Grand Prix Top 8s and you have a worthy champion.

As teammates go, Helmut Summersberger, who finished second at Austrian Nationals, is about as good as anyone could wish for. Currently Level 5, and having secured Level 4 for 2007 with his team's performance Saturday, Helmut made Top 8 of the World Championships in 2000, and has a pair of Grand Prix wins (Lille and Barcelona). He is particularly adept at team competitions, having finished eighth at Grand Prix–San Francisco, and fifth at Charleston. Truly this is the definition of the guy you want on your team.

Rounding things out, we have David Reitbauer and Stefan Stradner. While neither has the same level of Pro Tour experience as Thomas or Helmut, they are each valuable members in their own rights. David was keen to point out that he hit Level 2 with his team's performance, and that both he and Thomas have also held the title of Styrian Masters Champion in the last two years.

The Styrian Masters is a player run event in Austria something akin to The Finals in Japan—a mixed format event that routinely attracts over 100 players, and is held in high regard in Austria.

Given that the Austrians were the only team to take points off the Swiss during the team competition Saturday, they look in great shape to give them trouble on Sunday.