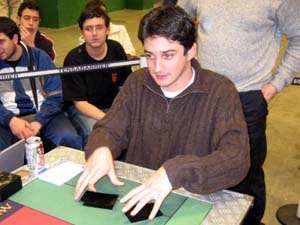 is it. The big game. The end of the biggest Grand Prix in the history of the Pro Tour Circuit. Bernardo hardly had time to breath after a grueling long semifinal while Kai has been resting for quite a while after demolishing a very unlucky Raphael Levy in the semifinals in another chapter of the "Levy Losing Streak" (Raphael has lost something like the last NINE matches against Kai Budde).

Apparently Budde hasn't lost his touch. Bernardo had to mulligan. His second one wasn't any better. The third had some lands so he kept it. He came out strong with second turn Veldaken Engineer and turn three Crystal Shard with open mana.

Kai played Raise the Alarm, Krak-Clan Grunt and Skyhunter Patrol and Cabral answered with Spire Golem and Somber Hoverguard. Despite his mulligan he was in good shape.

With the ground and the air full of creatures they each focused on dropping creatures. The Red Zone was a wasteland at this point. For turn after turn they eyed each other and did little or nothing.

Kai finally blinked, sacrificing Pyrite Spellbomb to kill Somber Hoverguard before using Grab the Reins to kill the Spire Golem. He untapped and cast Murderous Spoils to kill Hoverguard Overseer. That seemed to clear the table enough for a full out attack.

At nineteen Cabral had a lot of life to work with so he did, and redid his blocks before declaring them. In the end he lost eight life and two creatures. Things looked a bit grim for Bernardo but he bounced back.

Bernardo: "We knew it was coming, right?"

Kai sent his whole crew in trying to deal as much damage as possible before the Stone blew his team away. He got Cabral down to four. Cabral played the Stone. 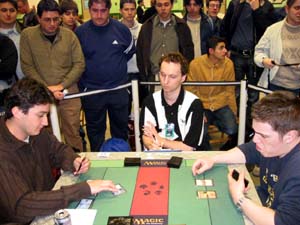 Obviously he didn't draw it. The Stone took his creatures, and Cabral's Crystal Shard away. The German tried to regain control quickly with Taj-Nar Swordsmith fetching out Vulshok Morningstar. Cabral used Barter in Blood to kill it before replaying Neurok Familiar and drop Grimclaw Bats.

Kai topdecked Oxidda Golem and sent it in, fully equipped.

The Familiar took one for the team and Budde added Loxodon Mystic to his side of the table. Cabral played Yotian Soldier and equipped it with Skullclamp. He was at four life. When Kai stopped to think Bernardo smiled.

Bernardo: "Good news. You don't have the Barbed Lightning."

The Bats traded with the Oxidda Golem leaving Bernardo Cabral at a mere one life point. He begged his deck for a Shard but all he got was Pewter Golem. Not perfect, but certainly not bad. Still, his two blockers were artifacts and Kai had Mystic. When Cabral failed to draw another blocker he scooped.

This time they both kept their hands. Cabral had first turn Skullclamp and second turn Steel Wall while Kai played a measly Raise the Alarm and a more promising Wizard Replica. Cabral didn't have a way to stop the flyer so Kai stuck to the plan with Skyhunter Patrol.

Bernardo dropped Neurok Familiar unluckily revealing Hoverguard Overseer. The Familiar turned into Skullclamp fodder while Kai pressed on with his flyers at full steam. He knew he had to move before the Skullclamp gave Cabral all his controlling cards.

He tried Oblivion Stone and asked Kai if he had Shatter. Which isn't a very good question. Of course he had Shatter. He's Kai Budde. The next attack brought Cabral down to thirteen and gave him enough food for thought.

Grimclaw Bats was Cabral's next plan. Again the German seemed unfazed. He sent his crew in. The Bats tried to stop Skyhunter Patrol but Kai blew up his Soldier Replica. Out came Abunas.

Kai: "That doesn't do much against you."
Bernardo: "Yup, but you seem to have more flyers than me." 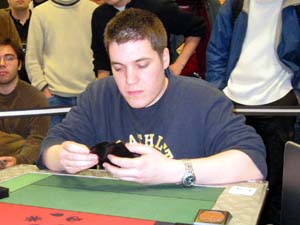 The next plan was fighting back on the ground. To do that he dropped Goblin War Wagon and Quicksilver Behemoth for one mana. The flyers brought Cabral down to seven and he played Barter in Blood just to draw some cards with Skullclamp. Kai smiled but faded when he saw Somber Hoverguard.

The Wizard Replica gained Vulshok Morningstar, basically turning the Hoverguard into a chump blocker. That's exactly what Bernardo Cabral did to stay at five. His next draw didn't provide any help so he extended his hand.