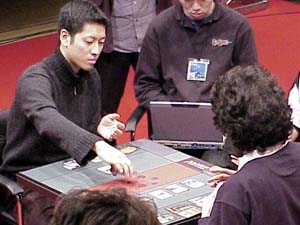 the thousands of dollars on the line and all the glory that comes with them, both of these players were looking relaxed as they shuffled for the final match. In the morning it's easy to be nervous, but with two wins already under their belts both Kuroda and Nassif were at ease.

Masashiro Kuroda has a lot of weight on his shoulders for this match. In all its years of professional Magic, Japan has never once taken home Pro Tour Gold. Worse yet, all the Japanese finalists, taken together, have won only a single game when the title was on the line. Kuroda's a fine man to break the curse. With a Team Masters title under his belt (and his team shirt under his sweater, for luck), he's shown that he can hang with the big boys. He's playing a version of the Big Red deck that's done so well this weekend, but his version distinguishes itself with a much healthier complement of burn, a definite advantage in this matchup.

France's Gabriel Nassif has been here before. He first broke onto the scene as one-third of Les Plus Class, the underdog French team that surprised the world when they made it to the finals of Pro Tour - New York in 2001. Since then he's distinguished himself as a deckbuilder, Top 8'ing last year's Pro Tour - Venice and then again at this season's New Orleans. He came just short, losing in the finals. He's ready to get to carry the big check. In a format that many players dismissed as dominated by affinity and red-based control decks, he designed TwelvePost and shocked the opposition. Now he just needs to win one more match.

Kuroda looked at his opening hand, then folded it up and placed it face-down on the table. He sighed and looked up into the lights. Finally he chose to keep. Nassif had no such agony, looking at a hand of Oblivion Stone, Forest, Forest, Reap and Sow, Viridian Shaman, Sylvan Scrying, Talisman of Unity.

Nassif led with the forests and Talisman, while Kuroda made three mountains and no other play. Nassif paused on his third turn, then got Cloudpost with Sylvan Scrying and played it. Kuroda blasted him with Pulse of the Forge. 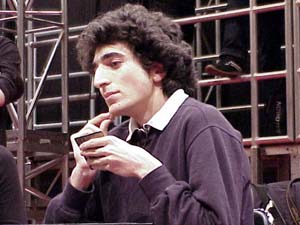 He untapped and passed it back to Nassif, who still hadn't drawn any action. He used another Scrying to get Cloudpost number two. Kuroda showed him another Pulse. Eight points down, twelve to go. Unfortunately for Kuroda, he didn't have a fifth land. Nassif set him back to three with an entwined Reap and Sow, but not before Kuroda aimed the third Pulse at his face. Nassif was at eight.

He searched his deck and tried to decide between Cloudpost and Stalking Stones. His face was all concentration. He settled on the 'Post, and ended his turn. Kuroda replaced his fourth mountain and was done. Nassif pulled up another Reap and Sow. He entwined it, and was hit with Barbed Lightning. Just five life left. This time he got the Stones without hesitation.

Kuroda grimly untapped and drew. He tapped his three lands and Fireballed Nassif for two. Just three life points stood between him and victory.

Nassif tapped his deck gently, asking for a good one. He pulled the top card up with a triumphant "Ting!" but immediately his face fell into a grimace. He hit for three and played an Oblivion stone. He watched Kuroda's face as he drew his card for the turn. Kuroda's expression did not change, but Nassif knew he would live another turn. Kuroda tapped three and put Damping Matrix into play.

Nassif drew, and this time it was Soldevi Simulacrum. He counted his mana, and wondered about the wisdom of Shamaning his own Simulacrum for the extra card. He decided he needed the beater, Shamaning the Matrix and playing out Jens. He turned it over to Kuroda. Kuroda played Blinkmoth Nexus, but frowned, indicating that he didn't have the kill. He played a robot of his own and was done.

Nassif dropped a Fate Counter on his Viridian Shaman and untapped. Finally his deck served up something really spicy: Platinum Angel. He blew his Stone, then swung in for five before playing the flying sanctuary. Kuroda's expression didn't change an inch. Nassif ended his turn. 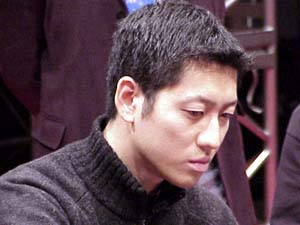 Kuroda untapped in a flash, threw down the fifth land and aimed Fireball for three at Nassif's face. With the one remaining mana he showed him Electrostatic Bolt for the Angel.

Now it was Nassif's turn to kick off. A Sylvan Scrying got him a Cloudpost, but he held back on it to play a third-turn Oblivion Stone. Kuroda wanted to wait on his Molten Rain, but shook his head, deciding that he couldn't give Nassif the time. He took out a forest.

Nassif replaced it with Cloudpost, having drawn another. Kuroda made a Simulacrum and Nassif did the same. Kuroda considered his options before clearing the way with Electrostatic Bolt and hitting for two damage.

"Do you have twenty damage already?" - Gabriel Nassif

Kuroda laughed and shook his head. Nassif took his turn and entwined Reap and Sow, getting a third Cloudpost. At end of turn Kuroda hit him with Pulse of the Forge. Nassif decided he couldn't risk another two from the Simulacrum and Oxidized it. Kuroda untapped and Fireballed him for five. 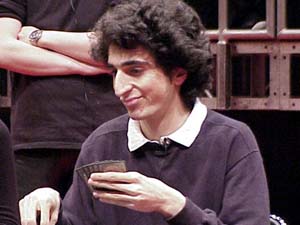 Now at nine, Nassif ripped Tooth and Nail. He put his hand down and started thinking. Eventually he came out of his reverie and tapped nine. Darksteel Colossus and Platinum Angel came into play. Kuroda played his seventh land and was done. Nassif went to put a Fate Counter on his Angel, then stopped. Kuroda had just three cards in hand. He chose not to.

He untapped and attacked with both his creatures. Electrostatic Bolt took out the Angel and the Colossus brought Kuroda to nine. Then Nassif played the second Angel. Kuroda swallowed. Nassif ended his turn. Kuroda held up his hand. It was his turn to think. A pair of Barbed Lightnings brougt Nassif to three, but left him empty-handed. Nassif had a Stalking Stones in play, so not even Arc-Slogger could let him survive the next turn.

Nassif bit his lip when he saw his opening hand: Cloudpost, Blinkmoth Nexus, two Sylvan Scrying, Duplicant, Oxidize and, Oblivion Stone. Not great. He chose to keep. His first draw was a Talisman, and he got it into play after taking one from Kuroda's Blinkmoth Nexus. Kuroda wasted no time in targetting it with Echoing Ruin. Nassif failed to draw a forest. Kuroda played another Nexus and hit him for two.

Still no land for Nassif. Kuroda hit for two.
Stalking Stones was hardly a forest and he took two more. Finally, a second Cloudpost enabled a Solemn Simulacrum for Nassif and allowed him access to green mana.

"I hope it's not too late." - Gabriel Nassif 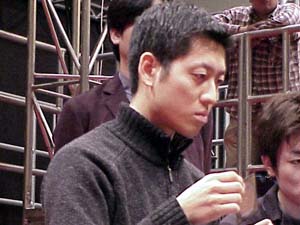 Kuroda could still only hit for two, but eleven life against Kuroda's nearly full grip was not where Nassif wanted to be. He untapped and Scryed for a forest, then got antoher with a second Jens. Barbed Lightning put him to eight before Kuroda untapped.

He turned on both the Nexuses and swung at Nassif. Nassif tapped one for Oxidize. That sent Kuroda into the think tank. Eventually he let it resolve, and Nassif dropped to seven. Kuroda thought hard before passing it back to Nassif. Nassif hit for four with his pair of robots and then cracked one with Viridian Shaman, looking for something big. He got Oblivion Stone instead.

He entwined a Reap and Sow, aiming for the Nexus, but Kuroda animated it and threw it at him with Shrapnel Blast. That put him to two. Nassif asked if he was dead and started making scooping motions. Kuroda shook his head and slowly pulled up his top card, then turned over Molten Rain for the final two points!

"I sided out my Arc-Sloggers, that's why they never come up." - Masashiro Kuroda

"Sure you did! The worst card in your deck! I only left in two Tooth and Nails." - Gabriel Nassif

He led with Cloudpost and then Scryed up another on his second turn. He played it out, but Kuroda was ready with the Molten Rain. Meanwhile Nassif was drawing Mindslaver and Duplicant. The Jens he drew a turn later was a cruel joke. He played out Viridian Shaman just to get something going. 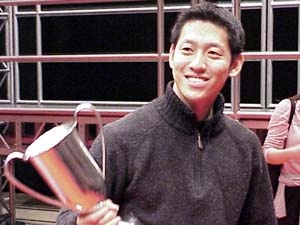 Kuroda hit him with Barbed Lightning, then untapped and dropped a Slogger. Finally Nassif drew a fourth land so he could play out the Simulacrum. Kuroda untapped and sent twenty cards from his library at Nassif's creatures before barelling through for four damage. Nassif untapped and dropped Duplicant, but Kuroda had twenty more cards to trade for four of Nassif's life points.

He untapped and played a land. The crowd could sense what was coming. He tapped all his land and they started to roar. He placed Fireball in the middle of the table, and the applause was deafening.