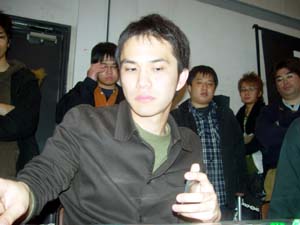 Morita was one third of PS2, a team that was Japan's most successful export in international Magic competition. They brought Japan its first major title with a Team Masters Championship, and won a Team Grand Prix too. His PS2 teammates, Katsuhiro Mori and Masashiro Kuroda, have achieved individual success- now it's time for Morita to be noticed on his own. Three times before he's made the finals of an individual Grand Prix only to come up short, and this time he's looking to break the habit. Across the table from him is Ichiro Shimura, a player who has been to a handful of Pro Tours but never made much of an impact. This weekend, he's made people take notice, and with one more win he'll walk away a Grand Prix Champion.

Shimura mulliganed his opening hand. He played Leonin Scimitar, and Morita played Pyrite Spellbomb followed by Slobad, Goblin Tinkerer. Shimura put some pressure on the board with Raise the Alarm, making one bigger with the Scimitar before playing Pteron Ghost. Morita played Thoughtcast, and killed the Ghost with the Spellbomb while still taking two from the equipped soldier token. Shimura was stuck at four lands, and his Slith Ascendant died to Irradiate. Morita used Fabricate to fetch Spire Golem, which came into play immediately. Shimura summoned Arcbound Bruiser, and Morita made an Arcbound Worker. The stalemate was soon broken, thanks to Shimura's Loxodon Warhammer. It went on the Bruiser along with the Scimitar, and it attacked. Shimura had no other creatures in play aside from the soldier tokens, so if the Bruiser died, it wouldn't make anything bigger. However, in order to take it down in combat, Morita would have to throw his whole team in front of it- a fair idea, considering that Slobad and Welding Jar were out. Rather than take the risk, he just blocked it with Spire Golem, and sacrificed an artifact land to make it indestructible.

Thanks to Quicksilver Behemoth, Morita got some much needed bulk on his side. Shimura cracked a Chromatic Sphere and found the artifact creature he was looking for in a second Bruiser. Now he was free to attack with the first, and it caused Slobad to eat an artifact and make an indestructible blocker. Shimura's threat was proving to be too strong to contain, and Grab the Reigns was enough to convince Morita that he couldn't win.

Shimura cast Raise the Alarm on turn two, and summoned Emissary of Hope on turn three. When he attacked on the following turn, Morita tried Needlebug as a combat trick, but Shimura was waiting with Electrostatic Bolt. Morita played Spire Golem, Welding Jar and Pyrite Spellbomb, but with five lands out was lacking a red mana source. Still, his 2/4 flier was enough to keep Shimura back for a while, as he just played an Arcbound Bruiser. Morita finally found a red source, and played Krark-Clan Grunt. Pyrite Spellbomb killed the Emissary, clearing the way for a Spire Golem attack. Shimura played a Scimitar and put it on the soldier, uneager to send the Bruiser into combat without another artifact creature in play. Plus, Morita had the Grunt out and ready to block with two artifact lands and a Welding Jar to eat. It blocked the soldier, and ate an artifact land to kill it. 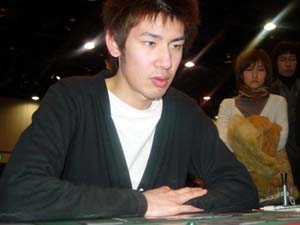 Morita drew and said go, keeping the Spire Golem back. Shimura cast Grab the Reigns with entwine, looking to kill both of Morita's creatures. In response, Echoing Truth bounced the Grunt, but Shimura still grabbed the Golem and was able to throw it to the dome. With Morita reeling, Shimura played Loxodon Warhammer, and rode it to victory.