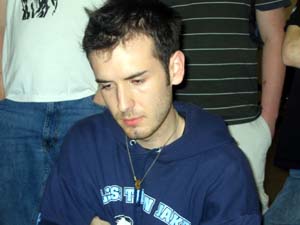 "The Type One Champion gets a trophy and the winner of this gets a stupid plaque? I want a trophy! This is completely unfair" was the lament from Lebedowicz before play kicked off.

Both players kept their hands and Stead kicked things off with a turn 1 Viridian Longbow, followed by a turn 2 Pyrite Spellbomb. Osyp tossed a Myr Retriever onto the board for his turn 2 play, and let the beatings begin. The Retriever was joined by its larger, Frogmite cousin, which promptly died to Bill's bomb. Oxidda Golem sauntered across the table to smack Osyp upside the head, drawing first blood for Stead.

Osyp cast a Neurok Spy and blocked Stead's Golem with his Retriever, returning Frogmite to his hand. Stead's board rapidly improved, as he cast Ogre Leadfoot and Nim Shrieker on consecutive turns. Osyp swung some of the momentum back to his side though, as he cast a Myr Enforcer followed by a Thoughtcast, giving him a hand of Vex, Gemini Engine, Iron Myr, and Pewter Golem. Stead kept the pressure on with his Shrieker, dropping Osyp to eleven life as the board began to clutter with creatures.

The Togit player sent back some beatings of his own, dropping Neurok Spy and Myr Enforcer into the red zone. Stead blocked the Enforcer with Oxidda Golem, and pinged it with his Longbow, effectively trading one-for-one. Unfortunately for him, Osyp followed it up with Barter in Blood. Stead sighed, and said, "Guess I'll sacrifice these two…" as Lebedowicz had rid himself of two troublesome creatures, leaving him with a Spy and Iron Myr to Stead's nothing.

Bill passed the turn with no action, while Osyp cast Gemini Engine. Bill picked up the card and asked, "So you get a twin 3/4 guy only when attacking? Like it's only 3/4…"

He had a huge answer in Furnace Dragon, effectively nullifying Osyp's mini-bomb with a huge hit of his own. A Pewter Golem for Osyp, and a swing with the Dragon plus a Drill-Skimmer for Stead quickly followed. Essence Drain shot the Skimmer out of the sky, as Osyp attacked with his Spy and Pewter, giving him a very effective race. The life totals were now Stead 5, Lebedowicz 9. Another swing from the Dragon plus a Dross Golem made certain that Osyp couldn't kill him, and the game again seemed to turn in Osyp's favor as he put a Drill-Skimmer of his own in the way of Furnace Dragon.

Stead: "That had to be right off the top." Adam Horvath pretended to look at my screen and said "According to this, he had it the whole time," sending the crowd into a rumble of laughter through the crowd. Unfortunately, Stead played an Arcbound Hybrid of his own as a blocker, and the game promptly ended when Osyp couldn't find another answer to the 5/5 flier.

A one-land hand for Osyp sent him reaching for his library to pull a second six, and a disheartening third hand of five. "Adam, I'm going to five man… you need to win."

First-turn Disciple from Stead meant that pressure would be on Osyp all game, making his double mulligan look even worse. A third-turn Neurok Spy was matched by a Cathodion from Stead's side of the board. Bill took two from a fresh Arcbound Hybrid, but was able to Irradiate Osyp's pesky Spy, making sure he was able to stay ahead in the damage race.

Double Pyrite Spellbomb from Stead savaged Osyp' board and resulted in the loss of three more life, but Osyp was able to save his Arcbound Hybrid with a Wail of the Nim. A late Gemini Engine desperately stabilized the board for the Togiter, and when Stead didn't attack into the Engine, Osyp turned around and sent the mechanical Stangg on the attack the next turn. Cathodion and the Disciple double-blocked, and the Engine went to the graveyard, but not before doing six to Stead.

The board stalled, as both players could draw only land until Osyp tossed a Quicksilver Behemoth onto the board. Stead again tapped his deck, looking to push through the final two points of damage. Stead then read the Disciple of the Vault aloud and cast Echoing Ruin on his own Great Furnace, and extended the hand to Osyp. Unfortunately for Bill, Osyp just waggled his finger at Stead and send "Vex," causing the Floridian to hold his head in his hands and say, "I swear to God we passed that card fourteenth pick, and it may have just lost me a game."

Ogre Leadfoot entered the fray on Stead's side of the board to chump block the Behemoth, giving him another chance to deliver the killing blow to the woozy, but still-living Lebedowicz.

"Goddammit, he won't DIE!" He was, right, as Osyp simply swung with his team and evened the match.

"Now I can tell all my friends I lost to Vex… and Wail of the Nim, one of the most underrated cards around."

This time it was Stead's turn to paris, as Ginde informed his teammate that he won his match, making it 1-0 in Thaaaat's Me's favor.

A Cathodion for Stead, and Yotian Soldier, Leonin Bola, and Iron Myr for Osyp kicked off Game 3. An untargetable Drill-Skimmer came into play for Stead, which Osyp answered with Neurok Spy of his own.

Looking at Osyp's untapped Island and Swamp, Stead asked, "Was that a mind trick? You know, the Vex play when you said, 'I took it out because you knew about it?'"

"I didn't even reach for my sideboard!"

"Ah, so you still have it, obviously. Just ignore me, I'm stupid."

"I don't even know what you are talking about, Bill."

Dross Golem from Stead added more pressure to his side of the board, while Osyp lost his Iron Myr to a stray Viridian Longbow ping. The Togiter answered right back with Pewter Golem, as both player's life totals continued to decrease in two-point increments. 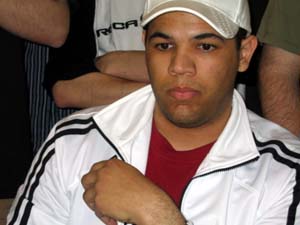 Two more pings from the Longbow destroyed the new Pewter Golem, and Bill cast a Pyrite Spellbomb, looking to finish Osyp's Spy. He strangely decided to take the damage from the Spy's next foray into the red zone though, and Osyp cast Gemini Engine to a comment of "That's what I thought," from Bill. He hit the Engine with two pings of his Longbow in his next mainphase and finished it off with the Spellbomb he rightly saved for just such a purpose.

Stead began chiding himself for a mistake that was only apparent to him, as he dropped Osyp to four life with his next attack, before dropping a very timely Grimclaw Bats onto the board. Fortunately things worked out for him, as Osyp could only attack for five damage during his own turn, leaving Bill at three life, and able to swing/ping his team to a Grand Prix: DC victory.

Thaaaat's Me! are your 2004 Grand Prix: Washington D.C. Champions!