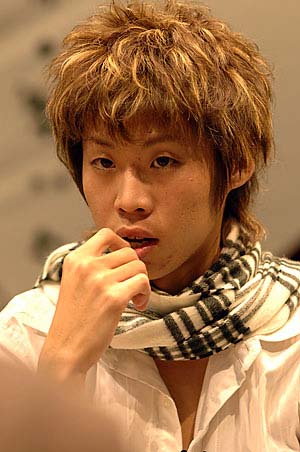 After five days and 26 rounds of competition, we're left with two men standing. Frank Karsten of the Netherlands continues his swath of destruction through opponents that face his Gifts/Dragons/Greater Good combo-control deck. One of four undefeated players on Day One, Karsten has now pushed that streak to 8-0, leaving two defeated Top 8 competitors in his path.

Facing him is Katsuhiro Mori, piloting the popular green-white Ghazi-Glare deck so many of the Japanese have had success with this week and hoping to cement a Japanese sweep of Teams, Player of the Year, and World Champion. These players have met twice already at this event as they battled their way to the Top 8. Karsten took the match in Extended, and Mori got the win in Booster Draft. They're 1-1 on the week, and whoever wins this one is taking home a giant pile of cash, Pro Tour fame, and the title of Best in the World.

Mori won the flip, each player took a mulligan, up came the lights, and with a congratulatory high-five, it was time to settle this thing.

The opener was all Karsten. Mori had turn two Jitte followed by Wood Elves and a couple swings, but during that time the Dutch player used Farseek for Watery Grave to set up his mana, then cast Gifts Ungiven getting a Greater Good plus Reclaim in hand while Yosei and Recollect went to the graveyard.

Three fresh cards from the Top, get Greater Good in play, untap, play land No. 6, and out comes Yosei. Wood Elves swung into the Dragon and Jitte counters sent both to the graveyard, but only after Karsten had drawn a fist of cards off Greater Good, locking Mori down in the process.

Karsten then cast Kodama's Reach, splicing on Goryo's Vengeance targeting Yosei, and Mori saw the writing on the wall, quickly conceding to the powerful combo and sending it to Game 2.
Karsten 1, Mori 0

Mori opened this one with Pithing Needle on Sakura-Tribe Elder, then got a Selesnya Sanctuary into play followed by a Wood Elves. Karsten, not on much of a clock yet, cast Kodama's Reach, setting up step one of his combo ("get mana"). 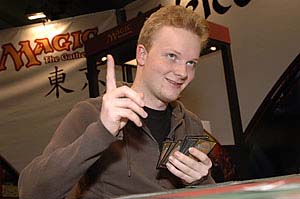 Karsten had a plan.

But now the pressure started. Mori summoned up a Kodama of the North Tree, and next turn followed it up with Yosei as North Tree dropped the Dutch player to 12. Karsten raised his eyebrows at that one, casting Gifts on the end of Mori's turn and, he hoped, kicking off step two of his combo ("do sick things").

Mori spent a long time dividing this one up, but finally decided the way to go was giving his opponent Yosei and Kagemaro, sending Hana Kami and Wrath of God to the bin.

Frank untapped, played Kagemaro, and used his last mana to blow everything up. Mori cast a Seedborn Muse and used it to untap at the beginning of Karsten's next turn, which was locked down by Yosei. Frank passed the turn back and Mori used the mana to cast a devastating Congregation at Dawn at the end of Frank' turn for Hokori, Dust Drinker and two more copies of Yosei.

Amazingly, Frank did manage to fight on a bit more, wiping the table one last time with Goryo's Vengeance, but he spent so many turns locked down by various effects that he just couldn't fend of Mori's creatures long enough to survive.

Getting to go first for the first time in the match, Karsten had a little more breathing room getting his engine set up this time. He had the coveted turn one Top, but Mori had an equally good turn one: Pithing Needle on Top.

Mori only had land for turn two, and Wood Elves for turns three and four plus a Selesnya Guildmage. But, during all this, Karsten was stuck on three land with no green mana anywhere in sight as a Sakura-Tribe Elder and Kodama's Reach mocked him from his hand.

Getting beat about the head by little green men and Umezawa's Jitte, Karsten smiled at last. "I drew a land!" Grins were had on both sides when it turned out to be Miren, the Moaning Well.

Mori cast Greater Good and pumped up one of his elves enough with Jitte to sac it to Greater Good in a move that was awfully reminiscent of a little card called Skullclamp (You may have heard of it?).

Karsten at last found his Forest. But, even as he played it, he said "But, is it in time?" Mori cast a Congregation at Dawn, threatening no more untap steps for Karsten, and that was enough for the Dutch player to concede quickly. Skullclamp is pretty damn good. Skullclamp+Time Walk over and over is even better.

A visibly excited Mori joked and told the truth all at once. "One more win, and I am champion!" 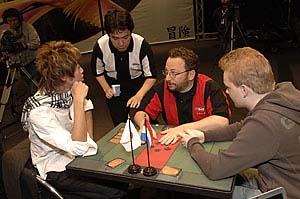 Menery discusses his ruling with the players.

And then things got strange. As the players were shuffling up for Game 4, Head Judge Sheldon Menery informed the players that it been realized that a mistake may have occurred in Game 2. During that game, Mori had used his Seedborn Muse's ability on a turn when Frank Karsten had to skip his untap step due to a Yosei effect.

However, since Karsten skipped his untap step, Seedborn Muse wouldn't have had a chance to untap Mori's lands, and Mori ended up using some of those untapped lands to cast Congregation at Dawn at the end of Karsten's turn. The match was put on hold and the judging staff reviewed the video of the event to confirm that this is what had happened.

On the video, it was clear this had occurred. The ruling was that, because everybody involved had missed it, it had to be allowed to stand. Mori was given a procedural warning because it is his responsibility to know how his cards work, and we were off to Game 4.

Despite everything else that had already happened, somehow this one was the craziest game of all. Mori took a mulligan and came out of the gates very slowly, while Frank had an excellent start of Farseek into the following Gifts Ungiven:

Mori sent Meloku and Kagemaro to the grave, Frank untapped, played land No. 5 and passed the turn. Mori played Loxodon Hierarch, at last getting some beat on, but Karsten dropped out Yosei, ready to race with a better beatdown than the beatdown deck. Mori answered with Greater Good, took 5 from the dragon, then saw Ink-Eyes come into play, answering with Loxodon Hierarch No. 2 in a battle of fat vs. life totals. Ink-Eyes and Yosei swung in, and a Hierarch blocked and sacced, sending more cards to Mori's hand. (Mori:18, Karsten: 16)

Now it was Mori's turn to send in, bringing it with his remaining Hierarch, then casting Seedborn Muse and Birds of Paradise. That brought on Gifts No. 2 at the end of his turn. Yosei and Soulless Revival went to Karsten's hand, Hana Kami and Goryo's Vengeance went to the graveyard and the Dutch player untapped, sending in the team. Next came Yosei No. 2 to tap Mori down for two turns as Karsten's two legendary dragons sent themselves to the 'yard.

But, thanks to Seedborn Muse, Mori was still getting to untap on Karsten's steps, allowing him to stay in this race that had looked unwinnable. Karsten fired off a third Gifts Ungiven, setting up a Shizo, Death's Storehouse that allowed Ink-Eyes to start punching through and robbing Mori's graveyard, while casting Death Denied to stock his hand with power, but somehow, incredibly, Mori was still in it.

Powered by the brute force of Greater Good, he found a Yosei of his own, untapped on Karsten's turn with his Muse, then at the end of that turn cast Congregation at Dawn for triple Yosei. Mori began locking down his opponent's turns one by one, drawing five cards each time and swinging with the team until it was all over. 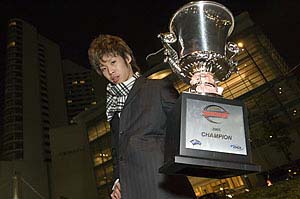 Katsuhiro Mori, you're the 2005 World Champion.

As it became clear Karsten was done, he grimaced. "When I cast the Death Denied after the third Gifts, I miscounted. I thought I had 8 [mana], but I only had 7."

He shook his head once more. "I had a great plan."

It was a wild game, one that I'll admit I thought Karsten had in the bag, but just like that it was beyond his grasp and the Japanese had pulled off the dream. The host nation had swept Player of the Year, the national team competition, and the title of World Champion.