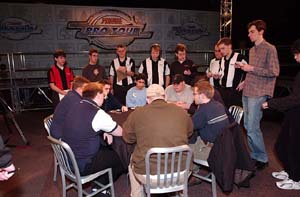 With over a hundred drafts taking place each Pro Tour weekend, in the end, it all comes down to one: the top 8 draft. With the players involved forming one of the least experienced top 8's in recent memory (Only two prior appearances amongst them), there were more questions than usual as to how the draft would go.

The players sat down to draft in the following order:

Thoren opened his first pack, taking Rabid Elephant, with Gallitz, whose draft plan going in was to go blue-white. Donnie, recognizing the importance of Psionic Gift in the archetype, chose it over Aven Fisher, which most consider the better blue card overall. Jeff Cunningham, sitting to Gallitz' left had also entered the draft wanting blue and only blue, took the Fisher, setting up a war between the two. Meraghni was left the privilege of taking Spellbane Centaur in a seat behind two players who obviously didn't want green, Eric Froehlich chose Scrivener, Bastos took the first red card chosen on the table, Chainflinger and Andy Wolf, despite red's constant pairing with green, chose Krosan Archer (virtually assuring him of Chatter of the Squirrel on the wheel) and Neil Reeves took Dusk Imp and the unplayable Laquatus's Creativity, a signal he'd go blue.

Donnie's pack saw the Virginian open Aven Smokeweaver, with Cunningham taking Dusk Imp behind him, suggesting the two wouldn't be entirely hostile if Gallitz went blue-white. Farid took Diligent Farmhand, keeping his second color options open, while Froehlich got Second Thoughts, declaring his intention to be blue-white. Bastos then took Sadistic Hypnotist over the Krosan Avenger that Wolf got, suggesting he'd go black-red, Reeves got the deceptively good Divert and Jens got Leaf Dancer on the wheel.

After Cunningham took Concentrate and Farid a Werebear, Froehlich took Chamber of Manipulation, passing the best card in the pack, Firebolt, to Federico. On the Wheel, Donnie, who had never seen Junk Golem, took the unplayable card over Phantom Whelp, at its worst a good sideboard card for blue-white. Pack four saw Meraghni choose his second color easily with a first pick Kamahl, with the other holding firm in their color choices.

At this point in the draft, the decks looked as follows:

Eric's pack offered him a tough decision: Repel or Second Thoughts? A number of observers felt that Repel was the right choice as having multiple Second Thoughts in Rochester draft would cause your opponent to know to play around them, but Eric felt cutting off white was more important at this point, so he took the Thoughts. This in turn left Bastos an Overrun, which he took, seemingly throwing Andy's draft into havoc. Neil, meanwhile, sticking to his colors, seemed to have the packs go against him time and again despite good positioning. Bastos next pick saw him take barbarian Lunatic over Ghastly Demise, suggesting he'd given up on his quest to draft black, leaving Neil sitting five seats behind the nearest black drafter. Unfortunately, the good cards never came. Part of the game. 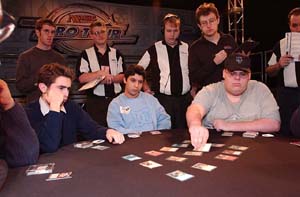 Wolf's pack saw him take Elephant Ambush over Minotaur Explorer, a pick that suggested that he wasn't taking the more aggressive red-green tack that some drafters feel is needed for the archetype to be successful. Jens, who had taken a late Patrol Hound in the previous pack, solidified himself as green-white by taking Hallowed Healer. Out of frustration, Donnie then took 'Jeff's' Patriarch's Desire over Patrol Hound, leaving the dog to Froehlich three picks later. Neil took Aven Windreader from his pack, with Jens taking finisher Stone-Tongue Basilisk over starter Werebear, While Gallitz took Aven Flock over Scrivener, suggesting his straying from blue-white in the previous pack was momentary.

After eight packs, the table seemed a little more settled:

Over the remaining sixteen packs, a few interesting things occurred:

Pack ten, opened by Wolf, saw Froehlich's good table position pay off, as he got the best common in the set, Cephalid Looter third.

Pack twelve saw him then take Hallowed Healer over Aven Windreader. This would later come back to haunt him as a lack of offence seemed to be his deck's weakness.

In pack thirteen, Farid, who had taken Repel in pack five with his eighth pick as he was frustrated by Cunningham taking the Millikin in the hopes of Repel returning, took Cephalid Looter over Barbarian Lunatic. This pick seemed completely wrong for the Frenchman, whose red-green deck was shaping up nicely and didn't need the splash.

Jens, who more than anyone else positioned himself well according to what the other drafters were doing, got a third pick Beast Attack. This would have been Cunningham's if he'd chosen to not fight Donnie for blue. With Jens taking the Attack, no one was interested in taking the remaining Hallowed Healer until Eric got it seventh.

Pack fifteen saw Jens get a second pick Overrun. Again, the lack of white drafting was apparent as Eric got Shelter sixth.

Eric opened pack twenty-one and found himself looking at Mystic Zealot and Shadowmage Infiltrator. Needing a win condition, he took the gold card and opted for the splash, but later admitted this was a mistake.

Pack twenty-two saw Bastos open Gorilla Titan, Firebolt, Ember Beast and Lithatog. He chose...Krosan Beast, which would more often be a 1/1 in his deck. Bastos lost in the quarterfinals.

At the end of the draft, Thoren and Froehlich seemed to be looking good, and one had to think it likely that the winner of their match would probably face off against Farid in the final. Farid predicted he'd get to the final where he'd lose to a deck with Overrun: That means Jens or Andy.