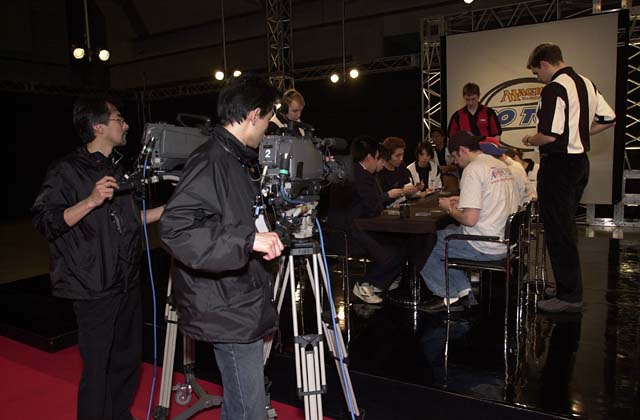 The final draft before the cameras

As so often happens in Invasion Block Rochester Draft the decks simply formed themselves around the first few picks with every player on each team playing their first card from each booster for the entire first set of boosters. Unlike any other Team format before the commonality of three or more color decks is overwhelming and as you will see not a single one of the six players in this Masters Final will be playing a mono or bi-color deck.

Fuller and Benafel were both pumped from their Top 8 achievements in the Pro Tour and were looking to break records with their total prize money for the weekend. All three of the players on the team had achieved Grand Prix victories in limited in the last 6 months.

Due to their higher ranking the Japanese team had the choice of whether to play first or second and chose the former. Here are the sets of boosters for the draft and the relevant picks made therein.

Unlike in, for example, Urza's Block, it is harder to play specific colors to combat opposing colors in this format due to the diversities of deck types and the substantial increase in 3 or 4 color decks. As a result teams have found that it is better to build a strong deck that his synergies within itself and simply make sure you make the better card choices in those colors to combat your opposition. My suspicion is that team A.B.U. (the reacting team) had preconceived color position strategies as placing a Vodalian Serpent opposite an Angel of Mercy is not great if that deck decides to go g/w beatdown.

The Panzer Hunters certainly did have a draft strategy going into this final. Momose wanted to draft black cards, Reiji wanted to draft red cards and Itaru, the veteran of the three, sitting in the middle would just fill the gaps.

Bombs: Pyre Zombie. This card is obviously going to cause problems in any match up, but an interesting thing happened a few turns down the line: the Japanese allowed a Cremate to go all the way round to Chris Benafel when they might have defended it fairly easily. Whether it is good to be defensive enough to play a Cremate to counter a Zombie is certainly a good question, but Chris did end up putting it in his deck as a 41st card.

Picks of interest: Noah took a second pick Vodalian Zombie over Repulse and Zanam Djinn and all of his team backed him on that decision. Sure enough the Repulse was bound for Chris, but it obviously implies that this team believes that beatdown was the way for Noah to go, despite the well known power of the Djinn.

Picks of interest: Ryan and Momose have already started choosing cards to beat the opposing colors with Obsidian Acolyte and Shivan Zombie respectively. Chris makes his first launch into black here by taking the Shambler, probably because of its incredible ability to deal with the Pyre Zombie.

Picks of interest: After Noah had taken the Repulse there were no good blue cards left in the deck, so the Restock was probably just a defensive pick for Momose to stop Ryan getting it. As it turned out he would be moving into green anyway.

At this stage Chris realizes that he is definitely three colors, as his Probe makes playing that Shambler even more appealing. The position C match-up therefore is already looking like a r/u/b mirror.

Bombs: Darigaaz the Igniter. This dragon arrived in Momose's pre-fixed colors so he was more than happy to sweep that one up. His Restock was now looking very appealing and from this stage onwards he was playing r/g/b.

Breath of Darigaaz was also a great card for Reiji against Chris's deck. All in all this booster was obscene for the Panzers as the Exclude was also a mean trick to have.

(There was not much else of any interest in this booster.)

The final decklists showed the following color configurations for the players: