facing off in Round 21 of the Team Rochester on Saturday, the United States and Japan had a little knowledge about how the other team might go in the Final Draft. However, since Japan won their previous encounter, the U.S. was left with something to prove. 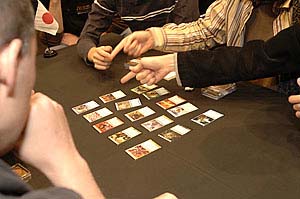 The opening of the packs seemed to favor the Japanese.

The draft quality seemed to skew a bit in favor of the Japanese players, with Ichiro Shimura (Seat A) ending up with the strongest deck at the table. His green-black monstrosity included a ton of token generators, and pump spells, and is topped off with Vulturous Zombie, one of the best cards in the set. Jon Sonne, Ichiro's opponent, has a decent deck, but probably needs to draw spells in the right combination to have a shot in that matchup.

The two national champions drafted near-mirror Boros decks in Seat B, but Takuma Morifuji has three Viashino Fangtails plus Bathe in Light and a solid combination of men. Antonino De Rosa has spells instead of men for removal and is splashing green for Guardian of Vitu-Ghazi at the top end of his curve, something Team USA felt would be good in the matchup. Opinions on that matchup varied widely, since De Rosa seems to have enough removal to eliminate any Fangtail advantage, but Morifuji's deck could just get out of hand if he can't handle the 'tails.

Finally you have Seat C, where Oiso drafted a solid, but unspectacular Dimir deck, and Reeves continued his trend of picking four-color green. Reeves's deck is extremely strong, containing two Last Gasp, two Farseek, and a host of fat men that could compete at the pending winter sumo basho. Two Siege Wurms, Grave-Shell Scarab, and Ursapine would be very hard for Oiso to handle, as would Trophy Hunter, should it manage to live for a turn or two.

Oiso felt his deck and his draft had turned out reasonably well, but so did Reeves, and the only thing Neil was worried about was the possibility that Oiso would get his counterspells early and quash a boom boom or two while beating down through the air.

Listed below are how the complete picks unfolded.