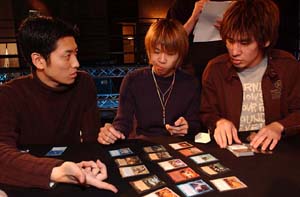 PS2 (Poor Shark 2) dethroned Panzer Hunter this weekend as the top Japanese three-man team, and now they will try to do what Panzer failed at twice: winning the team Masters finals. Panzer Hunter fell two years ago to ABU (Benafel, Boeken, Fuller) and last year to Phoenix Foundation (Budde, Baberowski, Blume). This year PS2 will be taking on the Canadian squad 2020, who were finalists at Pro Tour – Boston at the beginning of this season.

PS2 went right into their chosen colors in pack one, with Mori taking Aven Fateshaper and Morita a Primal Boost. 2020 then went into their set combinations by putting Rood into blue with Ascending Aven, Wolfman into black with Severed Legion (against Mori's blue), and Pollock into green with Wirewood Herald (against Morita's green, but Pollock feels he has experience in the mirror matchup). That left white for Kuroda, with Catapult Master. 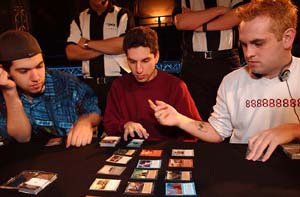 From there, each team went into its colors easily. Rood was blue/red, and got a Skill in the pack he opened. Wolfman was black/white. Pollock drafted red/green beasts, and was rewarded with a Sparksmith in pack 4 and a Wirewood Savage in pack 5. Kuroda was white/black and was having difficulty deciding between Soldiers and Clerics. Mori was red/blue, and got the bomb Future Site in pack 8. And Morita was green/black with a Wirewood Savage and many Wretched Anurids to power it up.

Because each team had only one green player, many green cards were defensively drafted as the packs were opened. Wolfman had to first pick a Snarling Undorak in pack 4, and later on in Legions, Mori had to wheel Needleshot Gourna and Hundroog. Once one team started cutting green cards, the other had to follow so that they didn't fall too far behind in the green mirror.

The bombs opened were few and far between. Mori had Future Sight, and Kuroda lucked out in a big way, getting both Quicksilver Dragon (which he splashed in his black/white deck) and Exalted Angel. Both Rood and Mori had Lightning Rifts, and drafted sufficient cyclers to support them. Rood had the only Skill, and both Rood and Mori had Sparksmiths. The only Timberwatch Elf in the draft went to Pollock.

The best picks are those that are good in the particular matchups, and these teams knew what those cards were. Both put a real emphasis on acquiring Wirewood Savage (and even Totem Speaker) for the green mirror, and both teams knew when to d-draft enchantment removal to make sure it never fell into the wrongs hands.

That said, PS2 came out of the draft with an advantage. Rood's blue red deck was looking great at the beginning, but a few too many counterdrafts and some weak Legions packs may leave him short on business. His opponent, Kuroda, has a Dragon and an Angel, along with strong Soldier and Cleric tribal interactions. Wolfman's deck has no standout cards, and is just a collection of ogres and four-mana flyers. Mori's deck, on the other hand, is a bomb-laden blue-red number that should tear Wolfman to shreds. The only real advantage that 2020 has is in the Pollock/Morita match. Pollock has a big assortment of beefy dudes, Sparksmith, and a few red removal spells.