and We Add are two teams with very different stories. The former boasts lots of Sunday experience in Team Limited -- Gabriel Nassif burst onto the pro Magic scene as a part of Les Plus Class, the PTNY 2001 finalists, and B-seater David Rood finished second at Pro Tour-Boston the next year with the Canadian team 2020 (both teams were defeated by Kai Budde's Phoenix Foundation). Nova's third, Gab Tsang, is one of the game's grizzled veterans, and was playing in Top 8's before his teammates had even thought of the Pro Tour 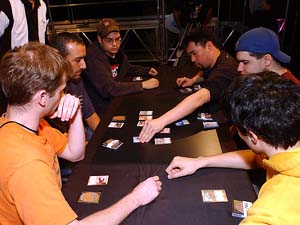 The six players squared off for their final draft of the weekend.

We Add is the quintessential Cinderella story. Adam Chambers, a young player with a lot of potential, found himself with no team coming into the event, so he hooked up with Andrew Pacifico for the Last Chance Qualifier and won a slot the night before the Pro Tour. From there, We Add never looked back, and rolled over the field, landing here in the finals.

The teams' strategies are as different as they are. Nova prefers to draft second, positioning their colors in such a way to gain advantages based on their opponents' first few picks. We Add is confident in their own draft skill that they don't mind going first and giving information to the opposition.

We Add won the coin flip and unsurprisingly chose to pick first. The best cards in pack 1 were white Honden and Teller of Tales, and We Add had to figure out how to split them up. Pacifico took the Honden, and Chambers the flier, probably eliminating any chance of them having a blue-white player. Tsang took Seizan, Perverter of Truth and let Rood have Frostwielder in the middle seat, hoping for him to go red-blue.

In pack 2, Chambers added a Kodama's Might to his Teller, showing blue-green Arcane. That was enough info for Nova to put Nassif into green-black, passing him a Befoul through Tsang.

Smith started picking up little red and black creatures, and Tsang was ready with the answer--white cards; damage prevention and Blessed Breath are great answers to red and black removal. To make it easier, Kitsune Blademasters kept making their way around the table to Tsang.

At least one Blademaster was passed because Pacifico drafted the first real bomb -- Yosei, the Morning Star. If he could stall the early game, it looked he'd have a great chance against Rood's deck, which was sorely lacking in removal and bounce to this point. 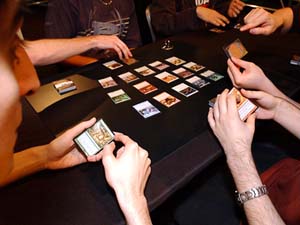 Rood took Soratami Mirror-Guard (his favorite card, the one he considers the most important in the format), allowing the blue Honden to float to Chambers. If Rood's deck was going to be all creatures, they might as well be good ones. Actually, he was just getting started. His next two picks were Meloku the Clouded Mirror (a.k.a. the Clouded Mirror of Victory, a.k.a. The Best Finisher of All Time, a.k.a. GG) and Soratami Savant.

Nassif was snapping up the removal, first hate-drafting the draft's only Glacial Ray, then taking a Yamabushi's Flame to potentially spread his deck to three colors. The last of the Champions packs wrapped up with Smith getting a clutch Rend Flesh and Pacifico snagging a Frostwielder and a Myojin of Cleaning Fire--another expensive bomb--for his white-red deck.

As the Betrayers cards began to flow, I got the sense that Pacifico's deck was pretty weak regardless of his upper-end bombs. His middle-of-the-road cards just weren't as good as everyone else's. His first Betrayers card -- First Volley -- paled compared to the Genju of the Cedars, Toshiro Umezawa, and Jetting Glasskite that the other players at the table got from the pack.

Thing kept coming up roses for Nova. Nassif nabbed a Matsu-Tribe Sniper -- wonderful against Chambers' deck, a Horobi's Whisper, and Iwamori. Tsang got Yukora the Prisoner, and Rood landed a stack of blue ninjas and a 4/4 Glasskite. It's no wonder they came away from the table smiling. 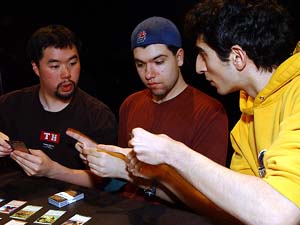 Nova's draft set them up as the favorites.

As they built, Rood commented that they would win unless they screwed up big time while playing. "We have all the tools we need." His red-blue deck looked crazy, with over 20 creatures and only one or two spell, neither of which was removal. His goal was to keep the pressure up against Pacifico's slow deck.

Nassif was talked into splashing for his two burn cards in what would have been a perfectly reasonable black-green deck. With two depletion lands, there is a chance he could trip up on his mana development and lose, but the upside of having so many removal spells was too good to pass up.

Tsang built his deck for the long game, hoping to abuse Umezawa with lots of removal and Soulless Revivals.

At the other table, We Add was lamenting their fate. "This is the toughest draft we had all day," stated Pacifico. Chambers felt he had a good chance to win, but the other two were less sure.

1 Field of Reality 1 Wandering Ones

1 Honden of Cleansing Fire 1 Indomitable Will

1 Ninja of the Deep Hours

1 Kami of the Honored Dead

1 Honden of Seeing Winds 1 Genju of the Cedars

1 Kami of the Palace Fields 1 Vigilance

1 Vigilance 1 Genju of the Fens

1 Boseiju, Who Shelters All
59 Cards