recent years, Neil Reeves has made U.S. Nationals his personal playground, finishing 5th in 2003, and then 14th in 2004 after getting a game loss in the final round for a deck registration error. But none of those before storming into the Top 8 once again this year on the back of his extremely well-tuned Monoblue Control deck and an excellent draft performance. Even if Neil hasn't been playing the game as much recently, he always seems to raise his game at U.S. Nats, and for the first time finds himself in the finals of what was once hailed as the "World's Toughest Magic Tournament." 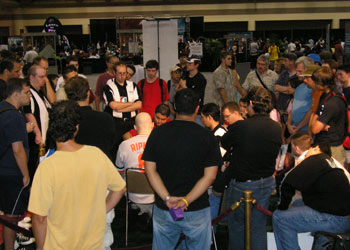 A thick crowd gathered around the Feature Match pit for the final.

Sitting across the table from Reeves is a man who was absolutely ecstatic to be there, loveable oaf and Seven Kings member Antonino "Italian Stallion" De Rosa. A dual citizen of Italy and America, last year De Rosa finished in the Top 32 of Italian Nats, and was therefore unable to compete in the States. This year he decided to cancel a summer vacation that originally would have left him out of the country for this year's tournament and that decision has turned out to be utter gold, putting at least $12,500 in his bank account already with a shot at another $12,500 if he wins.

While once it would have seemed rather unlikely that De Rosa would make it to the top of this particular stage, he has enjoyed a stellar year across card games this year, and his finals appearance is just another step in his trajectory of continued improvement and increasing respect as a top-quality gamer. He also wanted to make certain to note that the credit for the Monoblue Urzatron deck design that the Kings played here this weekend is given to Gerard Fabiano, who apparently worked very hard on what turned out to be one of the best Standard decks in the tournament.

Reeves mulliganned his first hand while De Rosa kept his seven on the draw. De Rosa cast the first spell of the finals in Talisman of Dominance, followed by a Solemn Simulacrum on the next turn which ran into a Mana Leak from Reeves. Both players rapidly ramped up their mana while also looking to build their hands for the inevitable counter wars.

De Rosa resolved a Thirst for Knowledge and Concentrate, while Reeves put a Jushi Apprentice on the board and dared De Rosa to deal with it. Ant tried to do just that with a Mindslaver, but Reeves tapped a lone Island and Annulled it. De Rosa resolved a second Mindslaver, giving him a very dangerous position and the possibility of tapping Reeves out so he could cast Memnarch on the next turn.

Reeves decided at this point that it was time to go aggro, activating his Stalking Stones and then putting two free Spire Golems into play. 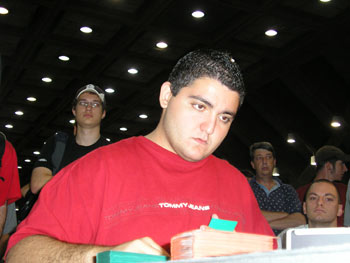 Reeves cast an early Spire Golem in after Annuling a turn-two Talisman from De Rosa. Seeing Antonino miss a land drop, Reeves then set about countering some of Antonino's card drawing, but only until the Italian Stallion laid an Island, and Reeves gave a stern frown when De Rosa drew and played the full Urzatron on the next turn – casting Meloku the Clouded Mirror. Reeves cast Vedalken Shackles and managed to Hinder De Rosa's Meloku, giving him a major weapon against the flying legend. De Rosa was nonplussed on the next turn, plucking Memnarch right off the top and right on time, with exactly enough mana left over to foil any theft Reeves attempted with his Shackles. Reeves was only able to cast a Jushi Apprentice on the next turn. 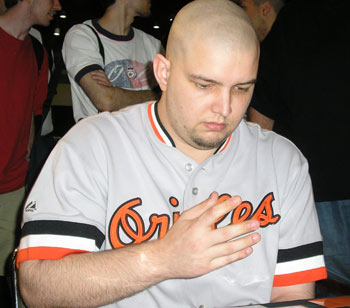 Reeves found himself in an early hole.
At this point play paused briefly as De Rosa asked some questions about how the Shackles-to-Memnarch interactions would work, since he didn't want Reeves getting control of Memnarch, but he also wanted to steal the Shackles for his own. After receiving a response, De Rosa simply drew his card, but head judge Sheldon Menery stopped play at this point to confer with the table judge and then to explain the interaction to the players.

Reeves was amusing in his assessment of his scenarios, particularly in light of how confused De Rosa seemed in how the stack would play out here. De Rosa thought some more about what to do and then said, "I'm just going to wait until you do something – I mean... if anyone can screw this up it's me, right?"

On the next turn, Antonino began interrogating the table judge again as to how things would work out if he made a particular play or two. "If I [insert complicated Memnarch-Shackles scenario here] then what happens?"

"You have a flight to catch," quipped Reeves. "Just do it and let's see what happens."

"No! That would be bad." De Rosa then went back to asking the judge further questions.

"You know those times when you are in a team draft and you are getting smashed and your teammates look at the board and just walk away?" asked Neil. "Everyone behind you just walked away, shaking their heads at me."

"I'll make you a deal – what do I have to sacrifice in order for Memnarch to die?" asked Reeves. "I'll give you to Islands and a Shackles. No? How about two Islands, a Stalking Stones, and a Shackles."

"Actually, now I don't know what happens. But we're going to find out." Reeves used his Shackles in response to try and steal Memnarch. "The finals of Nationals and neither one of us know the rules on how this one works out. No clue..." 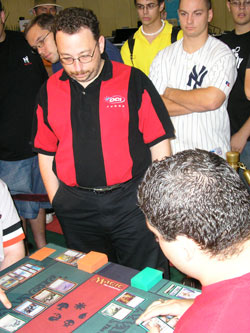 Menery advises De Rosa that he has to make a play.

De Rosa thought long and hard about his options, being informed along the way that it was time to make a play by Head Judge Sheldon Menery. "I have no idea, Sheldon, I'm sorry."

De Rosa finally decided to use Memnarch to steal Neil's Shackles as well. They let the Shackles resolve and the Memnarch passed over to Neil and the Spire Golem passed over to Antonino so - as improbable as it may seem to observers who were watching only a turn before - Reeves ended up with the Memnarch.

De Rosa's deck absolutely refused to let him pay for this colossal mistake though, and delivered Mindslaver unto his hands. That let him utterly wreck Reeves on Neil's turn and then regain control of all of his important permanents on the next turn, getting an extremely lucky win in the process.

"I figured if you kept that draw and didn't counter the Extraction, you must have had Annul in hand," reasoned De Rosa.

Neil was clearly frustrated, but kept crashing across the red zone with his Golems, dropping De Rosa to nine and then five. De Rosa again drew Memnarch, but Reeves threw a Hinder onto the board, looking like he'd finally win a game. A third Spire Golem hit the board and Reeves pointed at De Rosa, daring him to draw an answer before he died on the next turn.

De Rosa shook his head and Neil Reeves was finally on the scoreboard in what was widely considered an advantaged matchup for him coming into the finals.

De Rosa kept a hand in Game 4 with two pieces of the Tron and an Island. He looked stalled on lands even after a Thirst for Knowledge, but once again his deck delivered just what daddy needed on time (and Island), letting him cast one of the two Solemn Simulacrums in his hand. 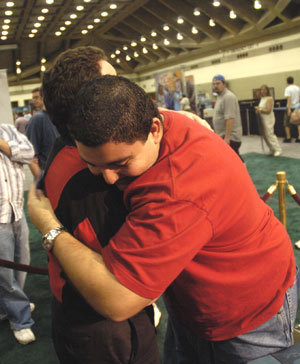 De Rosa fetched a Swamp with his Thirst, giving him a way of casting the Cranial Extraction in his hand on a future turn. Antonino then resolved a second Jens and then had an Annul for Reeves's Spire Golem before laying the missing piece of his Urzatron onto the board. De Rosa resolved a Meloku through a Hinder from Reeves, while Reeves only answer was another Spire Golem. De Rosa's squadron of men continued to go aggressive, dropping Reeves to 10.

The next attack from Meloku and friends dropped Reeves to 6, and a counter war occurred on the next turn over Neil's Boomerang on Meloku. Reeves won that battle, but was now facing down five illusions on De Rosa's next attack, dropping Neil to 2.

One more attack from De Rosa and Neil said, "Congrats Ant," extending his hand to the new American national champion.