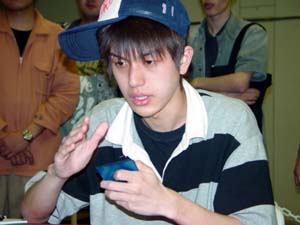 appearances by a handful of surprising decks in the Top 8, the tournament has appropriately come down to Goblins vs. Affinity. However, Fujita's Goblin deck is no mere one-dimensional aggressive creation. By splashing green, Fujita has been able to combine the aggressive nature of Goblins with the disruption of efficient artifact removal. Fujita has had a great deal of success with Goblins in major events, including a win at Grand Prix Bangkok where he popularized Goblin Bidding. With the Japanese National Championship on the line, there's probably no other deck he'd rather be playing.

Both players mulliganed their opening hands. Fujita started with a Prospector, and Tsumura played Frogmite and a Ravager, which was quickly killed with Electrostatic Bolt. Fujita missed his second land drop, and Tsumura began to pull ahead with Thoughtcast, then put Skullclamp on his Frogmite. It got through for three damage, and Fujita dealt one with the Prospector, still lacking a second land. Tsumura played a Worker, Enforcer and Disciple, and Fujita Bolted the Enforcer. He finally found a second land, but it was too late- a second Disciple came out, and the game was over. 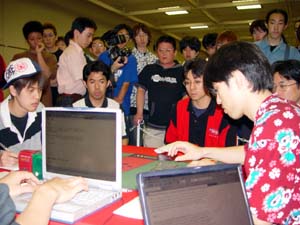 Fujita had a second turn Sparksmith, and Tsumura's start merely had two lands and a Welding Jar. Viridian Shaman removed the Jar, and Tsumura cast Pyroclasm to clear the board before playing Arcbound Worker. On the following turn he made a Myr Enforcer, which died to Naturalize. Fujita untapped, and destroyed the Worker with a Shaman. A Skullclamp went on the Shaman, and it attacked for three. Tsumura's Frogmite kept the Shaman back, until Fujita played and attacked with a Clickslither. Tsumura played a Welding Jar, and Fujita killed the Frogmite with a Bolt in response. Fujita played a second Skullclamp, and when he tried to give it to the Clickslither, Tsumura responded with Shrapnel Blast. The Shaman attacked for three, and the other Skullclamp went on it to put Fujita far ahead. Goblin Sledder on its own merited a Pyroclasm, and Fujita came back with Goblin Goon. A turn later, Tsumura conceded.

Tsumura mulliganed down to four, as none of his hands were good enough to keep. He managed to do okay for a four land hand, playing a Disciple followed by a Worker. Fujita Bolted the Worker and played a Sledder, then a Sparksmith on the following turn. It blocked an attacking Disciple, and the Sledder was sacrificed to help it survive combat. Viridian Shaman got rid of Tsumura's Welding Jar, and Fujita added a Sledder to his side. Tsumura played a Frogmite three turns in a row, and each time they were removed easily. Once Fujita played a Skullclamp, Tsumura conceded. 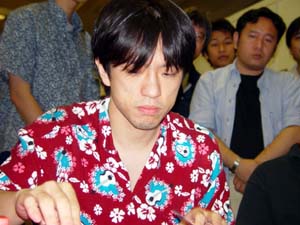 Tsumura cycled through a Chromatic Sphere to play a Worker, and missed his second land drop. Fujita had Goblin Sledder and a Sparksmith, but Tsumura wasn't out of the game despite his bad mana draw. He played Welding Jar and a Skullclamp, followed by a free Frogmite. Oxidize destroyed the Skullclamp, and Fujita played one of his own. Welding Jar was sacrificed to save the Frogmite from a Sparksmith shot, and Tsumura played a second Worker. With only one land though, Tsumura was in no position to put up a real fight. The Sparksmith took down creatures as the Skullclamp provided more cards. Thanks to Viridian Shaman destroying Tsumura's only land, Tsumura was left with no permanents. When Fujita played a few more threats, Tsumura conceded to make Tsuyoshi Fujita the Japanese National Champion.