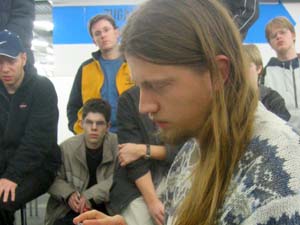 were the two names you could instantly recognize from the Top 8 list. Blech won Grand Prix Genova a while ago and Hamon has been on a Kamiel-or-Kai-like rampage lately, winning a Grand Prix in this exact format and coming pretty close to taking the whole thing again in another Grand Prix and in the Top 8.

If anyone in this room can stop the French its Reinhard Blech. He won Grand Prix Genova in incredible fashion with a perfect control of the matches. He always seems to be several steps ahead of his opponent. Playing in his home country he has the unconditional support of the crowd.

They began the round by checking each other's deck. Blech liked Hamon's deck but claimed his was better.

Reinhard: "... you have some annoying cards. Only sixteen lands and one Myr?"
Yann: "It should be more than enough."

We shall see. While they shuffled Blech asked Hamon about his recent sucess, claiming it would be impossible to win two out of three Grand Prixs in the Mirrodin Sealed qualifying season.

Blech imediatelly announced he would keep his hand, while Hamon took a full minute to approve his. He still came out faster with Bonesplitter on his first turn and Goblin Replica on his third. Blech had the first creature with a turn three Krak-Clan Grunt, followed by Frogmite. 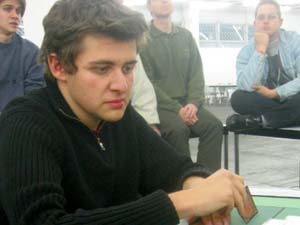 Indeed it came, quickly followed by Tel-Jilad Chosen. Blech passed the turn without adding anything to the mix. The French frowned and spent a few moments working out the implications before announcing his attack. A second Thoughtcast gave him a few more choices and he sent the whole crew in.

The German shrugged and blocked. His Frogmite took on the axe-wielding Replica whiel the Grunt squared off against the Chosen. They traded with no tricks. Hamon rebuilt with Serum Tank and Tel-Jilad Chosen.

He untapped and played Duskworker. The French took full advantage of it with Domineer. The German took a full hit down to eight. He drew one more card and scooped.

Hamon smiled and they began discussing the game. 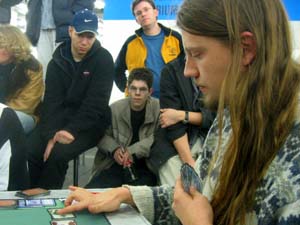 Blech's fortune didn't improve with the start of the second game. he had to take a mulligan. Although he tried to keep a straight face it was obvious he wasn't happy with the second as well. He dropped on the table and announced a second mulligan.

Yann: "I'm sorry."
Reinhard: "There is nothing you can do about it."

The third time he smiled, at the irony of it all.

Despite it all Blech still had the first move: turn three Frogmite. Hamon played turn three Thoughtcast. On the following turn he played Lumergrid Augur.

Reinhard: "Why isn't that on the main?"
Yann: "It wasn't good enough for Quarters."
Reinhard: "Well, against me it is."

Reinhard: "You want to kill me with some kind of combo?"
Yann: "I don't think I'll have a lot of trouble killing you anyway."

Tel-Jilad Chosen kept Blech's creatures back while the Augur went through two cards.

Reinhard: "This is just like Extended. You just sit back and watch your opponent do things."
Yann: "Yup." 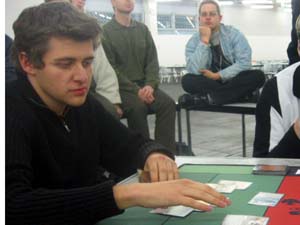 Domineer stole Frogmite and Hamon used the Red Zone to balance the life totals. Blech sighed and played another land. He now had seven, but nothing else, apart from Myr Retriever. Hamon stopped using his Augur to draw cards and started swinging with it.

Blech drew, and played yet another land. He was in a flood of biblical proportions. Hamon played Viridan Shaman and Blech tried to convince him to blow up the stolen Frogmite.

Hamon would have no of it. He might not be cool but one swing later he was a winner. Yann Hamon wins Grand Prix Munich!

Yann: "Sorry about that."
Reinhard: "It happens, no problem."