Well, well, well...what can you say about teamwork and breaking formats? As volatile and as unpredictable as many people claim Invasion Block Constructed to be, one playtesting group rose to the challenge, putting two of its members in the finals. Albertus Law is one of the Tour's rising stars having two Top 16 finishes in his last two Pro Tours. Kelvin Hoon is not as well known as Albertus, but he has also proved that he is no slouch, winning the Malaysian Open and finding himself in the finals of this Grand Prix. 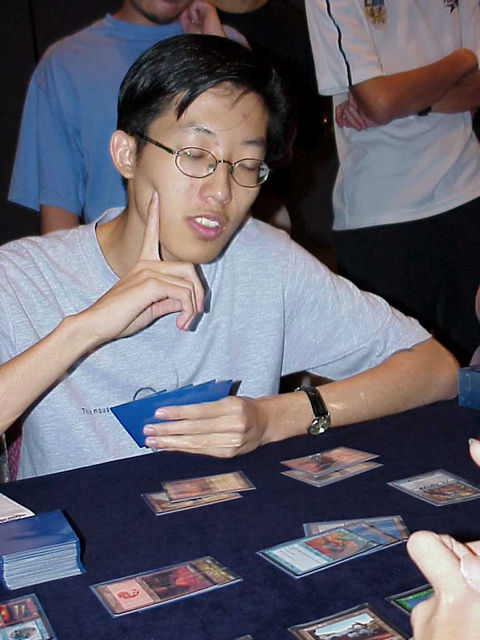 Law won the die roll, and opted to play first. After a Paris mulligan, his hand held two land, Fact or Fiction, Fire/Ice and Obliterate. Hoon's initial hand held one Repulse and six land, and he too went back for seconds. His new hand held no bears, but did have a rather even mix of land and spells. An Ice from both sides kept the other down in tempo, but things brightened up for Law when he discovered that Hoon held no offense, and did not hold a Disrupt in his hand. Not only that, Law also managed to resolve one of his Fact or Fictions in order to gain the upper hand over Hoon.

Hoon was not going to be outdone though. Drawing one of his (two) copies of Fact or Fiction, he revealed Meddling Mage, Goblin Trenches, Battlefield Forge, Plains and Coastal Tower. Taking a gamble, Law separated the cards into lands and spells. Hoon gladly accepted the spells, even going to the extent of thanking Law in the process.

Hoon first played Meddling Mage, and named "Absorb" to try and protect his Trenches from Law's counterspells. He then followed through with his Goblin Trenches, but Law Fired the Meddling Mage in response and then Absorbed the Trenches. A second Fact or Fiction from Law gave Hoon the opportunity to spit Urza's Rage, Coastal Tower, Prophetic Bolt and two Repulses. After much deliberation, Hoon split it into Coastal Tower and two Repulses or Urza's Rage and Prophetic Bolt. Law chose the smaller pile, but the one with bigger business spells.

The Meddling Mage that Hoon bolted for entered play, holding off all Excludes, which cleared the way for Goblin Legionnaire. Making Stormtrooper tokens at the end of Hoon's turn, Law looked to slowly gain complete control, until a Lightning Angel from Hoon entered play, but it was bolted away by Law, until the Goblin Legionnaire lept it to save the Angel from disaster. This Prophetic Bolt fetched Law an Absorb, while the attacking Meddling Mage was downed by two recruited Goblins. Hoon used a Repulse to rid himself of one of Law's tokens, exclaiming that he "finally found a use for them", but the situation was slowly slipping away from Hoon's grasp. 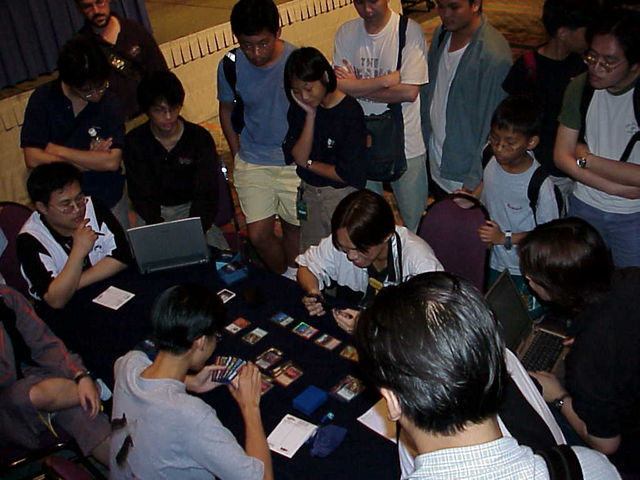 Although Hoon still had a Lightning Angel in play and raring to go, Hoon's hand of Galina's Knight, Fire/Ice and two lands looked less than impressive compared to Law's Absorb, Prophetic Bolt, Exclude and Urza's Rage as its relevant spells. When Law Repulsed the Lightning Angel, Hoon tried to make up for it by playing a Galina's Knight to draw the Exclude out of Law's hand before trying for a Meddling Mage, which Law allowed. With the dial set to "Exclude", it cleared the way for Hoon's Lightning Angel, which met up with another Absorb from Law. Hoon's next trick included trying to ram the Meddling Mage into two of Law's tokens in an effort to lower Law's supply of mana. However, Law didn't bite and instead Prophetic Bolted Hoon. He didn't look all too please when the Bolt revealed four land, but at least he didn't have to draw them.

As stated before, Hoon's situation was rapidly crumbling around him. He attacked again with his Meddling Mage, which drew out two tokens this time. Law added to his arsenal by adding four more tokens, going down to 2 mana whereby Hoon cast his third Prophetic Bolt, netting him a Lightning Angel over Goblin Legionnaire, Meddling Mage and a land. When Law attacked with his tokens, Hoon was reduced down to five life, where a pair of Urza's Rages from Law neatly finished him off.

Once again, a loudmouthed Nick Wong let us know his latest theories into the minds and manners of competitive magic. Following his claim that "Magic is all about luck" last year, his latest discovery now consists of "here come all the mind games." Both players know about the exact contents of the other's deck, and both know that Law has the ability to switch styles from control to aggro.

And mind games it was, and it revolved around whether or not Law would bring in his creature package. In the end, Law took out his Obliterate, three Evasive Actions, two Disrupts, a Prophetic Bolt, a Goblin Trenches and a Mountain in favor of his four Meddling Mages, the Rakavolver and four Gainsays. Hoon took out two Fact or Fictions, three Repulse, a Prophetic Bolt and a Disrupt and brought in four Gainsays and two Lashknife Barriers and a Repulse. 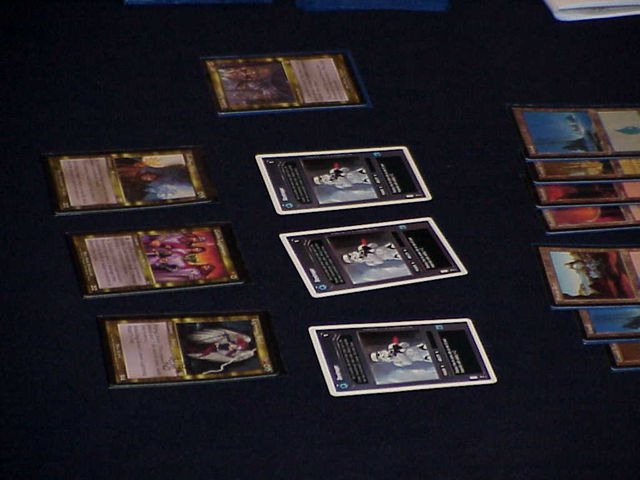 Hoon started out aggressively in the second game with a second turn Meddling Mage, naming Fire/Ice, followed by a third turn Galina's Knight. Of course, that would be fine and dandy, if it weren't for the fact that Hoon's three lands were comprised of two Shivan Reefs and a Battlefield Forge. At the end of Hoon's third turn, including his attack phase, Hoon was at less life than Law, and Law hadn't even cast a spell yet! A Goblin Legionnaire and a Disrupt later, Hoon's life total stood at 14. When Law Urza's Raged the Legionnaire away, Hoon took an additional point to fling it at Law.

In an attempt to stall the offense, Law played out his lone Rakavolver, paying just the white kicker. He then added to his offense by playing out a Goblin Trenches, with two mana open. Although Law stood at just 9 life, Hoon's hand of two Disrupts, Gainsay and land couldn't do anything to stop the rampaging life machine.

Fortunately, it didn't have flying so the Galina's Knight kept it at bay.

Unfortunately, now he had the Goblin Trenches to deal with.

Unfortunately, he didn't cast it.

Fortunately, he didn't need to.

At the end of Hoon's turn, Law "went for it", sacrificing as many lands as he could to increase the size of his army. Then, Hoon also "went for it", and Prophetic Bolted Law, but only saw Galina's Knight, Goblin Trenches and two land. Given his plentyful land situation, Hoon went for the Trenches.

On his turn, Law tried to Repulse back Hoon's Galina's Knight but Hoon had a Disrupt ready. Since all his creatures were tapped, Law could do nothing to stop the Galina's Knight from reducing him to 3 before Hoon used the Urza's Rage which he finally drew.

Once again, the mind games began. 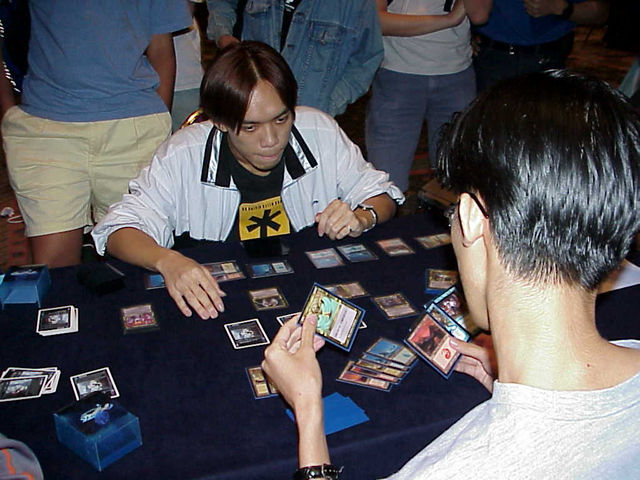 Hoon made minimal adjustments with his deck, taking out one Fire/Ice for one Repulse. This time, Law went for the throat by siding in all his creatures, taking out his Goblin Trenches, since Law is playing first. Both players kept their respective hands. While Law had no turn two play of his own, Hoon had a Galina's Knight. This time, it was Law to suffer self-inflicted damage as his Shivan Reef gave the Galina's Knight "a free hit" after he cast Opt twice before drawing a basic island.

Hoon drew a second Galina's Knight, but fearing Exclude, decided to hold it back. Law Iced Hoon's Coastal Tower during Hoon's end step and sent in a newly summoned Lightning Angel into the fray on his own turn. Hoon's Galina's Knight tried to race, but two points of damage versus three doesn't exactly look like the ideal deal.

Hoon summoned a Goblin Legionnaire to his call, but it got Fired by the Law. Hoon tried to race the Lightning Angel by tapping it with an Ice during Law's upkeep, but a Repulse from Law put an end to any racing ideas Hoon might have. Hoon cycled a Disrupt in an attempt to dig deeper into his library, but could only muster up a Goblin Legionnaire for defense. Try as they might, Goblins just can't jump high enough to stop flying angels, but with some assistance, they can be convinced to suddenly hurl themselves into the angel's wake and with the help of some Fire, the Angel was put to its holy end.

Once again, Hoon tried his Meddling Mage tricks, but Law Absorbed it away. Two Fact or Fictions later, it became obvious that Law was starting to run away with the massive card advantage he had garnered. When Law played his own Meddling Mage, he stopped all Galina's Knights from entering play. When Hoon tried to Repulse the Mage, Law thought for a bit before spending an Opt to see if there were any better options. With none, the Meddling Mage returned back only to see a Lightning Angel from Hoon.

It was all for naught, as next turn, three Urza's Rages later, Hoon was charred to a crisp. What can we say? Don't mess with the Law.