The Pro Tour has been defined over the past few years by two words: Channel, Fireball. Not the combo, of course, but the super team from California. It looked as though 2012 would be no different as we sat down for the finals of Pro Tour Dark Ascension. The finalists? ChannelFireball teammates Paulo Vitor Damo da Rosa and Brian Kibler, playing 74/75 card copies of the deck many of their team brought to the event.

The first game started off much as you would expect from a Wolf Run mirror match: mana ramp galore. For PV it was a pair of Rampant Growths and Sphere of the Suns while his opponent had a singleton Growth and Solemn Simulacrum.

"This is an incredibly interactive match!" Kibler commented with a big grin after stating exactly the opposite of the truth. Joking at the table was a strong indication of Kibler's mental game. Why? After arguably one of the toughest and most intense Semifinals matches of all time ten minutes prior (against the game's greatest in Jon Finkel no less), Kibler was back to his normal game composure ready to continue the game with laser focus in an effort to pick up another Pro Tour championship trophy.

Primeval Titan came crashing to the battlefield ahead of schedule for PV and called forth an Inkmoth Nexus and Kessig Wolf Run. His opponent followed suit with a copy of his own and also fetched up Inkmoth Nexus and the namesake Wolf Run. The two titans traded in combat, but a post-combat Green Sun's Zenith gave PV a second copy and having won the die roll and starting on the play seemed like it was going to be too much an advantage for Kibler to overcome. 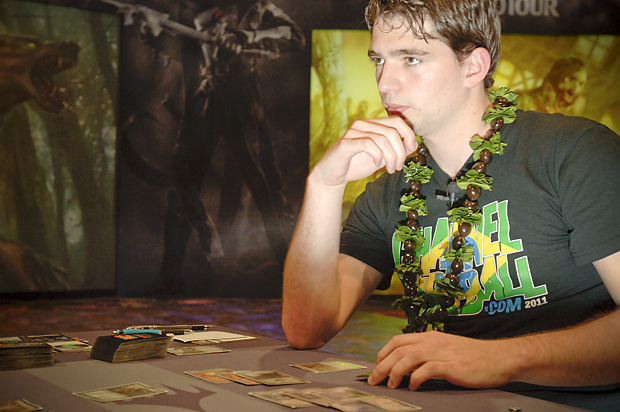 PV goes on the offensive in the first game, pressing his advantage of going first.

He made the most of it, however, casting Inferno Titan and using it plus a Slagstorm to take out his opponent's Primeval Titan. A Galvanic Blast allowed the American to deal with a potentially lethal Inkmoth Nexus headed his way and pumped by Kessig Wolf Run, and for a moment he looked to take the first game. But it wasn't to be as a second attack from PV with an Inkmoth once more pumped up by Wolf Run was enough to finish the job as Kibler had no more removal.

"I used up all my Galvanic Blasts against Jon!" Kibler laughed as he prepared for Game 2, slyly referencing his improbable win against the great with three Galvanic Blasts in the fifth game for exactly lethal through Negate and the help of metalcraft. 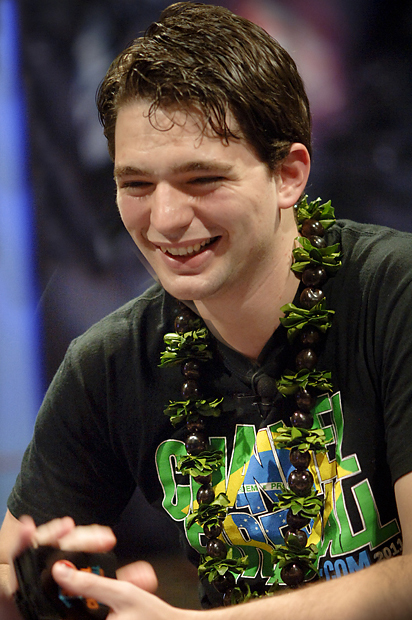 PV's happy Kibler used up all of his Galvanic Blasts in the previous match.

As they had in the first, both games played mana acceleration in the second with Kibler sneaking in a poke using Inkmoth Nexus while his opponent was tapped out. Would the opening die roll to start the match be the determining factor? With players of such high caliber and such identical decks it seemed entirely possible that might be the case due to the number of other variables that were essentially equal; in Day One or Day Two of the event, Kibler or PV's deck strength and play-skill could carry them, but with those things balanced equally it might just come down to some luck.

Both players cast and traded copies of Huntmaster of the Fells and the first Primeval Titan of the game entered the battlefield for Kibler. The 6/6 tutored up Kessig Wolf Run and Inkmoth Nexus, no doubt as it had done many times throughout the course of the weekend, but it died a turn later to Karn Liberated out of PV. The Planeswalker hit the battlefield and exiled the massive threat forcing Kibler to reload with an Inferno Titan. Did his opponent have an answer to that? 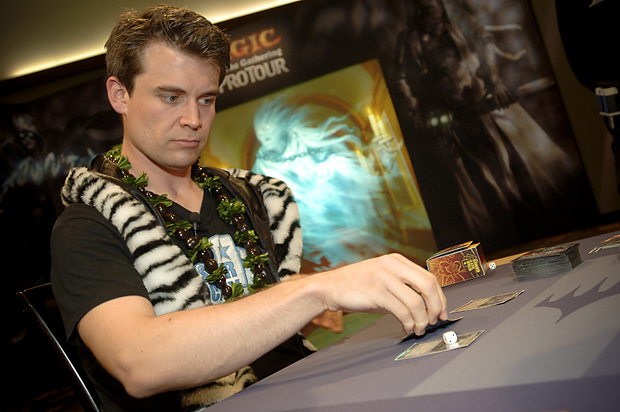 Kibler drops titan after titan, not even slowing down in the face of the mighty Karn Liberated.

Evidently not as PV activated a Nexus and poked Kibler but passed the turn with no other action. Kibler sent his Titan in then cast Green Sun's Zenith for a Primeval Titan and the two players headed to the third game of the match with the score tied, the player going first having won both contests.

The players, teammates outside the realm of competition, were all focus for the third game. In order for Kibler to win he'd have to break serve, defeating PV whilst the Brazilian was on the play. As for PV? He needed to not have disaster strike and for the match to play out as expected. But being the favorite comes with a heavy mental cost: anything could go wrong meaning he wouldn't be living up to expectations.

The concentration did no good for PV who faced exactly what he was afraid of: bad luck. A mulligan forced him to start the game down a card from his opponent, but he still had Rampant Growth to accelerate. Across the battlefield, so did his opponent continuing the same tricks they had used in the first two games.

Thrun, the Last Troll was the first non-Inkmoth Nexus creature to the battlefield entering the fray on the fourth turn for Kibler. PV's first creature was an Acidic Slime he had to cast Green Sun's Zenith to get, though he was able to short his opponent a Rootbound Crag in the process. A Garruk, Primal Hunter came and went for Kibler, netting him four cards as a result of his Thrun, the Last Troll and putting him in the lead. Could he break parity and sneak a win in while on the draw?

PV activated three Inkmoth Nexus and sent them in to threaten a possible poison death while his Acidic Slime stayed back on defense. A turn later the Brazilian activated four of the creature-lands and sent them to the red zone, only to lose two to removal spells. Still the combat step allowed him to put his opponent on seven poison, a dangerous amount.

Green Sun's Zenith from Kibler gave him Primeval Titan, which gave him two Inkmoth Nexus and threatened to give him the win in short order. PV had no choice but to continue pressing with his Nexus lands, but lost one to a Naturalize and had the other chump-blocked. Did he have any solutions left to his opponent's plays? 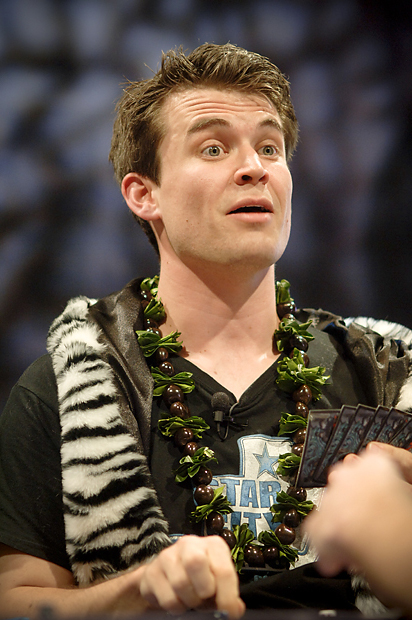 Kibler pushes for a win in order to break serve of players winning while going first. Can PV stop him?

No; the early mulligan stumble proved too much and the Primeval Titan took things home for Kibler.

"Good luck," Kibler offered his opponent as they prepared for the fourth, and potentially final, game of the match. PV nodded, focused entirely on playing.

Rampant Growth, Sphere of the Suns, and Solemn Simulacrum were the cards the two players used to accelerate this time. The flurry of spells allowed the Brazilian to land the first Primeval Titan while Kibler was left casting a second Solemn Simulacrum and trying to keep up.

A single Titan attack followed by a second copy of the 6/6 post-combat yielded a hand raise from Kibler. "I yield," the American said, conceding and moving to the fifth.

It was all down to one final bout. Kibler had managed to break serve, switching his opponent's heavy favorite status into his own. But now the pressure was on him to hold strong while on the play; could PV even the score in the game that would determine the champion?

With a handshake they got underway, PV immediately taking a mulligan after hearing his opponent decide to keep his hand. If PV was going to beat Kibler, he'd have to do it while handicapped once more. The stress at the table was palpable, both players fidgeting in an effort to release pent up nerves while also maintaining focus.

A Rampant Growth for Kibler allowed him to start the ramping process, but for the first time in the match his opponent didn't have such a spell on the second turn. A mulligan and no acceleration? When the third turn passed without any additional mana outside of his regular land drop, it seemed over for PV. Kibler wasted no time in dumping a Primeval Titan to the battlefield, tutoring up Kessig Wolf Run and Inkmoth Nexus and threatening lethal in short order.

His opponent finally found some help from a Solemn Simulacrum, but would it be too little too late? The 2/2 promptly traded for a copy from Kibler but PV fell to four poison and 12 life after the combat step. He did some math on his turn, but was quick to see it was over. He extended his hand to his teammate and Kibler emerged the Pro Tour Dark Ascension champion. 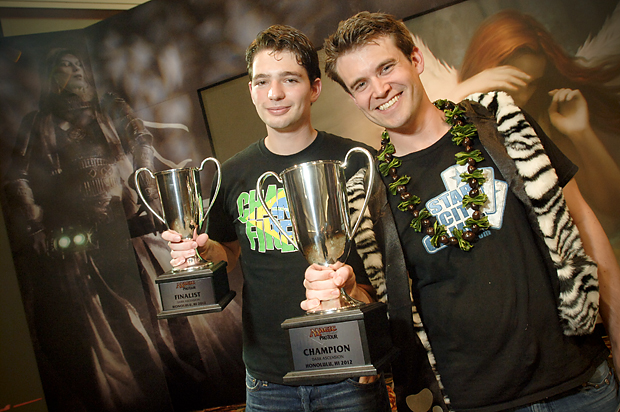