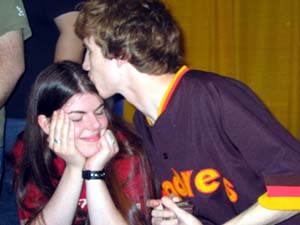 "My teammates wanted me to take it."

"They suck." Actually, Chris needed the Heartseeker to not end up in Eugene's deck where his blue-black deck could nothing about it. As a result, Stir the Pride found its way into Sullivan's deck for this green-white mirror match.

Gindy shook his head and nervously sent back his opening hand while Patrick leaned back and planted a kiss on his girlfriend Kate. "You look much more relaxed than me."

"I am relaxed. I am wearing--essentially--pajamas, I am with my girl and you are mulliganing." He spread his seven face-down cards in the form of a smiley face. He spread the grin even wider when Gindy went down to five cards, "I should have kept the first seven!"

Gindy tried to keep up with Sulli's draw of Razor Golem, Juggernaut, and Fangren Hunter. He had to blow a Predator's Strike to allow his Tel-Jilad Archers live through a Solar Tide but when Patrick showed him the Stir the Pride they didn't even bother with the formality of the math.

Gindy had another mulligan. He did get out a turn one Glavemaster and a Vulshok Gauntlets on turn two. The Glavemaster held the ground for him while his Skyhunter Patrol flew over unmolested. Sullivan had to Solar Tide to kill a Tel-Jilad Archers that had survived a Test of Faith and the equipped Glavemaster. He kept his three lands and three Myrs but he was still facing a beat down in the air. He couldn't find and answer and they went on to Game 3.

After two games of mulligans (and three mulligan total) from Gindy it was Patrick's turn to ship back a hand. His next six were no better and he went back to the well one more time. He opened on two Plains and a Specter's Shroud. His third Plains arrived in turn four but he was able to play Razor Golem and equip it. Gindy had played a Skyhunter Cub and had a turn four Exile. He took four on the next turn. Patrick had no attack the following turn and made a Pulse of the Tangle. After Gindy played a Tel-Jilad Archers Patrick wiped out his board with Solar Tide--choosing creatures with power under three. 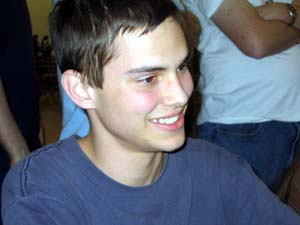 "This might be the best five card hand I have ever had."
Gindy played a Soldier Replica and when Patrick attacked he blocked and tried to kill it with Predator's Strike. Patrick Razor Barriered the Golem and moved his equipment to the Pulse token.

Gindy made a Clockwork Condor and it traded with the Pulse token. Gindy had another Skyhunter Patrol and followed it with Copperhoof Vorrac. With eight lands in play and two more in grip, the Vorrac represented a soft lock for Gindy. Patrick drew nothing and announced, "You've got me."

Horvath looked likely to emerge on top in his match with Fennel and the Grand Prix was coming down to the match between Stead and Lebedowicz.