Moreno smiled as he opened with a Careful Study discarding Basking Rootwalla and Deep Analysis. These were uncharted waters for him. As far as he was concerned, after his amazing comeback in the semifinals the pressure was off and he was happy to be here. 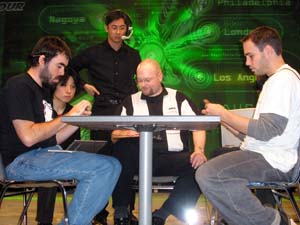 Pro Tour experience sat in the seat of Antoine Ruel, but Moreno had shown a few tricks over the weekend.

Antoine Ruel smiled as he studied his opponent and mugged his t-shirt's advertising slogan for the cameras. He was an old pro here on business; Force Spiking a second-turn Aquamoeba and then using Counterspell on a third-turn Merfolk Looter. He had held off Moreno's madness outlets and left him with only a pair of Basking Rootwallas but Ruel did not have a Psychatog.

Moreno flashed back Deep Analysis, making the odd decision not to trade damage by playing an Overgrown Estate untapped to pump up a Basking Rootwalla. At that point Ruel scored one for Mental Note as the cantrip brought a Psychatog to the top of his deck. That was the end of the Basking Rootwalla offensive. In fact, Ruel's Psychatog forced a Rootwalla to chump block to prevent any card drawing spell from making the Psychatog lethal.

Ruel's card-drawing spell turned out to be a Fact or Fiction that gave him a Thirst for Knowledge. Moreno had drawn extra cards from multiple copies of Deep Analysis but his need for multiple copies of Chrome Mox had forced him to effectively give most of those extra cards back. A Psychatog for Moreno forced Ruel to hold back and soon it was a full-blown Psychatog party: Ruel had two and Moreno had three. Before things got out of hand, a topdecked Wonder ended the party and killed Moreno. 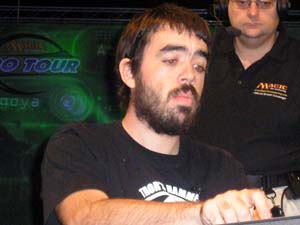 Moreno mulliganed to six, then got his second-turn Wild MongrelForce Spiked and his third-turn version Counterspelled … but those were all the counters that Ruel had. When Moreno went for a fourth-turn Arrogant Wurm off of a Careful Study, all Ruel could do was search with Opt and Mental Note for a Force Spike or other counter that was not there, instead settling in for an end step Fact or Fiction on Moreno's next turn but it ran into Circular Logic.

That cleared the way for Meloku the Clouded Mirror, which thanks to Wonder was the only creature (along with its tokens) in Ruel's deck capable of blocking. Ruel had sided out his Wonder. There were not quite enough cards in Moreno's hand to force a block, so Meloku would get the chance start making tokens after Ruel took another hit down to 9. Ruel however was then forced to use a Counterspell to force through Psychatog, but that left him with only one token and a Smother took down the Psychatog.

The hit in the air took Ruel down to 3, and after using a Smother to take down the Psychatog he was left with no non-land cards other than Meluko. Four tokens took down Arrogant Wurm, leaving Ruel with only two lands and Meluko in play but he had stabilized the board and he began replaying his lands.

He cracked the Cephalid Coliseum in response to a Deep Analysis and found a Circular Logic on the last card, along with a Mana Leak to stop the card drawer. Moreno tapped both of his green sources for a Wild Mongrel before attacking with his Rootwalla, losing it and Aquameoba in return for two tokens.

Ruel was down to two but he had cleared the board. Moreno used Ruel's land plays to read him for Circular Logic and took it out of Ruel's hand with Cabal Therapy but all he had to follow up with was Aquameoba and Deep Analysis, bringing him down to 5. Ruel saw the opening, made several tokens and cleared their path with Smother for the win. 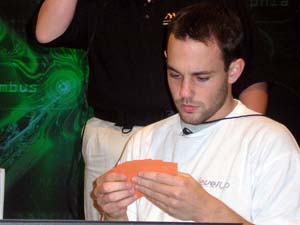 Antoine often liked what he saw sitting in his hand.

Both players joked about the fact that you can't sideboard against a single Meloku, and Ruel sideboarded in a Razormane Masticore face up for fun before sideboarding out what Moreno knew full well was almost certainly the same card. He then proclaimed: "This is where the comeback starts!" just as he did last turn. Ruel pointed out that 3-0 would be fine with him; he had to win this one for Randy Buehler. Moreno countered that he would win it for Mike Flores; it seems our commentators can be strong motivators.

Ruel kept a hand with Island as his only land and no Force Spike, counting on an Opt to get him what he needed. Moreno then whiffed on both a first-turn Careful Study and a second-turn Cabal Therapy revealing two Opt, Smother, Circular Logic, Mana Leak, Ghastly Demise and Darkblast. Ruel's explanation was that you have to trust your deck, which did indeed give him two more lands off the first Opt and his draw for the turn but those and the one he drew on the next turn were all blue.

He passed up a Counterspell with the second Opt trying to find a black source but still had none, and now he had no choice but to allow Cabal Therapy to resolve -- taking Ruel's Smother but leaving him two copies of Ghastly Demise. The black mana seemed to all be on the bottom, with Mental Note even milling two Islands before giving Ruel yet another off the cantrip effect. Finally a Fact or Fiction revealed what he was looking for along with Meloku. Moreno made him choose black mana or three juicy spells and Ruel chose the spells going for Meloku.

Moreno began fueling his Life from the Loam engine as Ruel continued to be without black mana. Using those cards, his Wild Mongrel did some serious damage to Ruel's life total by knocking him down to 8. He was turning his extra lands into both extra cards and extra damage. Ruel saw what he thought was his chance and returned all but one of his lands to his hand, replayed one more and attacked with five tokens and Meloku.

If Moreno couldn't finish the job this turn, Ruel's flyers would. He used dredge to get back Life from the Loam one last time, sacrificing his Cephalid Coliseum in an attempt to clear a path through the two tokens Ruel could potentially generate, but Moreno no longer had enough cards in hand for Wild Mongrel to be lethal without recasting Life from the Loam (which would leave him unable to pay for Smother).

It had to be the Psychatog, and that would have required two removal spells. Ruel pointed this out along with his lethal counterattack and asked Moreno if he could still win the game, confident that the answer was no.

Ruel was right, and without even his second color of mana he swept the finals to crowned champion of Pro Tour-Los Angeles.